Refer below to learn Xing Tian's Attack Patterns with example strategies that you can use.

Line Attack - All Front Tiles with Knock Back 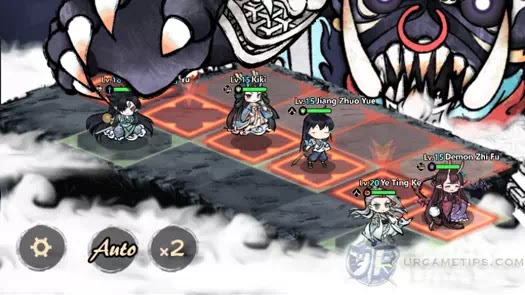 (Ignore characters, use only as reference for Attack Pattern 1)

- ATK+ Buff only triggers if it hits at least 1 target, lasts for 3 turns. 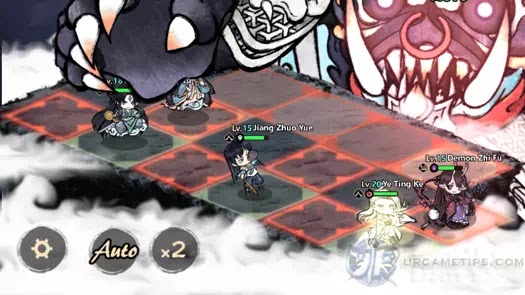 (Ignore characters, use only as reference for Attack Pattern 2)

- Minor Heal only triggers if it hits at least 1 target. 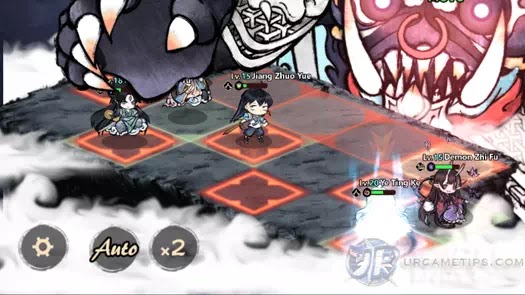 (Ignore characters, use only as reference for Attack Pattern 3)

Strategy A: Luck Based Poison Damage

- This Boss got super high armor, and high damages if Attack Pattern 2's ATK+ Buff get's triggered (damage increases by 300%).
- If most of your characters are still low Lvl and wearing Blue gears, this might not be ideal for now, better get Purple gears first and enhance them to at least reduce incoming damages.

- This Boss also have Poison Immunity (high chance to ignore), but still possible to inflict Poison (luck based).
- To increase your chances, use 2 or 3 T3+ Range Type Poison damagers to the 1st column, and make sure that they are safe from Attack Pattern 2 to avoid triggering the ATK+ Buff. 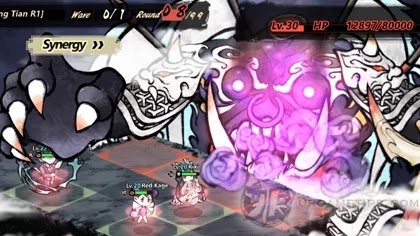 - Example Poison Damagers: Shadow Person (SSR- limited only to pre-reg players), Huang Ju Lang (SR), Red Kage (R), Green Kage (R), and other similar characters.
- Note that you can increase their "Poison damage" per turn and "chances to inflict" through gears' Stat bonuses and Gems, including CRIT+% if needed to trigger Poison from Crit Skills.

- Example: At least equip your Lvl 20 T3+ Red Kage with Executor Set (Blue Gears) that gives Poison+1% set bonus. This way your Red Kage would be able to deal higher Poison damage per round.
- You can farm these set gears from the 99 Tower Floors or Boss Arena (Shikon Yasha). Farm better gears later on if you like.

- Note: It looks like Poison damage doesn't stack and can be overridden by stronger or weaker Poison.

- You also need a strong tanky Healer (preferably a Shield Type) to keep your team alive. Move him/her between 2 tiles to heal the team while dodging Attack Patterns 2 and 3 (dodge Attack Pattern 1, only if needed to survive longer).
- Increase Healing amount if needed depending on the damages your allies are taking. I would recommend getting the Serpent Slayer Set (Farm from Boss Arena) that gives Healing+5% set bonus.

- For your other characters that isn't a Poison damager or Healer, better replace them with a low Lvl weak characters and place them directly in-front of the Boss right from the start to let them die from the Boss' first attack or first few attacks. This way, they won't interfere and trigger Attack Pattern 2's ATK+ buff.
- In case your team is still weak, use your best Poison Damager and attack while dodging all attacks.

- You can also try building a new strategy using ATK-/DEF- debuffers but you need a character that can reduce DEF by 60% (30% DEF reduction isn't enough).
- Example DEF- Debuffer: Master Lang Ya (SSR - reduce all enemies' DEF by 60%) or similar characters.
- Add at least 1 tanky Healer.

- Upgrade your DPS units and try to deal decent damages or use them together with Poison Damagers. Note that Demon Race characters can deal +25% damage against this Boss (Ghost Race).

- Note: The above example strategies are NOT the only way to defeat this Boss.

- How to Enhance Gears and Farm Enhance Materials