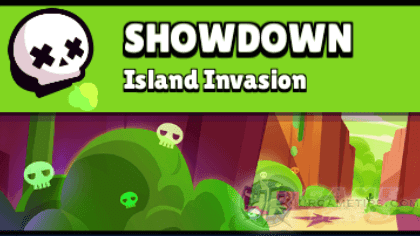 - 4 are located near the corners which is good if you have boxes. Don't stay here long though and run towards those wide bushes or at the center while other players are still busy breaking their own boxes (to avoid getting ambushed, especially if you are using a Brawler that requires a lot of hits just to break a box).
- The other 6 will spawn around the center area.

- Randomly appears around the center area but most of them can be found inside those very wide bushes. Expect fights here too early on, so either go and brawl with them or just get what you can and hide near the center.
- Memorize their locations to help you decide where to go early on. Watch the "Map Preview" right from the start to check the locations of the boxes.

- Island Invasion is surrounded by waters and it's full of bushes, a playground for bush fighters. Obstacles near the center are somewhat thin, so go near them to scout hiding Brawlers inside those bushes.

- If you have patience, getting 10th, 9th, or even 8th isn't common here, unless unlucky and got chased early on. Another reason is because aggressive players will go to those wide bushes right away to grab those Power Cubes, and would likely end up fighting each other or force someone to retreat with low HP.

- TIP: If you find your matches too long maybe because most players are also camping - making it harder for you to farm trophies, try to play again after some time to reshuffle competing players.

- I would suggest fast breakers with decent HP, and can take on Bull and El Primo, since they are commonly used for this map. Take note of their Power Cubes and current HP before ambushing though, especially when you have lower Power Lvl and fewer Power Cubes.
- Your aim here is to farm Trophies so getting 2nd~5th is totally fine.

- Honestly, low Lvl Campers here would have a tough time closing matches and getting top 3, so it's best to do this during Special Events (ex: Angry Robo).

- Grab Power Cubes near your spawn point, if you spawned near the corners, quickly run to the center or at least inside those bushes and hide (still a bit risky though). You can try to ambush or harass other brawlers to steal some Power Cubes early on (best done near center while you can see your enemies), or at least to charge your Super.

- Once you are done or most of the boxes are gone, quickly go and hide, preferably near the center area. Hide then either wait for ambush opportunities (for more Power Cubes) while hiding, wait until there are only around 6 survivors left before going a bit aggressive (better for ranged Brawlers), or just keep hiding.

- Avoid getting sandwiched or trapped, counter their movements and do not let your Brawler stay in between 2 enemies, especially during the late stage of the match.

- Once those poison clouds closes in to the center area:
- For melee Brawlers, if possible do not initiate attacks and dodge them unless needed, attack Brawlers that are being attacked.
- For ranged Brawlers, quickly lower someone else HP to possibly redirect their attacks to that Brawler.

- Same strategy above.
- Most of the time, the end game would be a 4 or 5 way stand-offs, so having a range and decent HP is an advantage (Upgrades and Power Cubes). They would usually go and kill off low HP Brawlers first.

- Quickly get Power Cubes near your spawn point, then run towards those bushes to gather more Power Cubes from nearby areas.
- Be careful when breaking boxes here because it is most likely that you'll get ambushed if there are enemies nearby. Use manual aiming to avoid hitting boxes while in battle.

- Ambush them if you have the upper hand (best while they are breaking boxes to reduce their DPS), or wait for them to fight another Brawler, then jump in to kill them both while they have low HP.

- For Bull and El Primo, it would be best to run to those wide bushes asap to get Power Cubes. You have the upper hand for now because Shelly for example, doesn't have Super yet.

- For Shelly, charge up your Super quickly then hunt melee units, use your Super wisely when fighting inside bushes (spam tap/click Super button (Yellow) instead of Normal Attacks (Red) to quickly execute).

- If you failed to gather more Power Cubes, better play it safe and move to the center to hunt other Brawlers or to hide.

- Same strategy above, but focus more at the center area.
- Most of the time, the end game would be a 4 or 5 way stand-offs, so having a range and decent HP is an advantage (Upgrades and Power Cubes). They would usually go and kill off low HP Brawlers first.

- I won't recommend squishy Brawlers here, because it would be tough to close out matches above top 4. Most enemies are tanks and would take a lot of strategy to take them out before those poison clouds limits your space, and ranged Brawlers with decent HP are very annoying to deal with once they do their scouts to charge their Super for example (especially Shelly).

- BUT!, here's some exception and as long that you can build up your Power Cubes as you go.

- Same strategy above.
- Use Crow's poison damages to scout or reveal enemies from those bushes, to safely break boxes or to let other Brawlers ambush him or her. Very annoying fellow that can disrupt enemy plans ~ lol.
- For Bo, use your Star Power's wide sight while in bushes to find enemies or to safely break boxes.

- Nice for Aggressive Brawlers to make things easier and faster!

- Meteor Shower is a double edged sword for Campers, good because it would make the match much faster, just hope that luck is on your side that it won't hit your location while hidden, exposing your location.
- The worst part here is that, it is possible that you will be targeted by Meteors 3 times in a row!

- This is very favorable for Campers, even if you have low Lvl Brawlers!
- Just hide well and avoid where the Angry Robo usually spawns, ambush Brawlers that are being chased to give them a hard time ~ lol!