Brawl Stars: How To Defeat and Get Best Robo Rumble Time (Trick)

- It is highly recommended that you do not play with randoms, create teams with friends or club members and use the team chat for Brawlers to use and strategies. 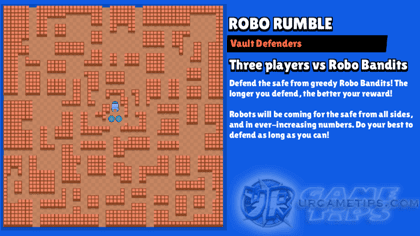 - Robo Rumble maps are randomly generated so if you want this specific map, you might need to save up your Tickets until then.
- If there are similar maps where El Primo's trick can be used, feel free to experiment.

Recommended Brawlers To Use For The Trick

El Primo (Must Have!)

- Charge your Super then lure some mobs (yup don't kill, the more the better but only lure what you can) to the upper most wide obstacle wall, then use your Super to trap yourself in. If done right, all mobs should stop moving and stay near you.

- Note: Doing this method would require your teammates to kill the 1st Robo Boss if it spawns at the lower area of the map.

- Charge your Super and kill all mobs until the 1st Robo Boss appears.
- Quickly go near the Boss and lure it to the upper most area, use your Super to let yourself get trapped. If done right, the Boss should stop moving and won't attempt to go to the center.

- Note: Doing this method is a bit risky because you might die from enemy mobs, especially if the Boss spawned at the lower area of the map, so be careful not to get overwhelmed.

- That's it for El Primo, just keep yourself entertained by attacking walls or spinning around, stay there until the end. 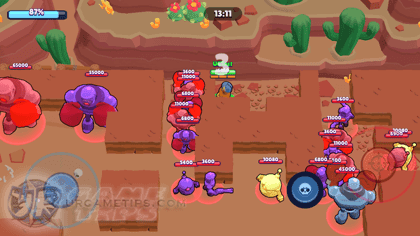 - Note: Keep moving to avoid disconnection from the game for being idle.

- The idea here, is to trick enemy mobs and bosses to look for you, but they can't because you are trapped, therefore they will just stand around and do nothing.

- There's a catch though, because the next Robo Bosses must spawn anywhere at the upper area of the map, if it didn't then your teammates must kill or lure them to your location. The good news though is that, there would be way less mobs to deal with because of El Primo's trick.

2nd Brawler To Use: Pam

- Recommended Lvl: Around Lvl 5 should do just fine.
- Your team's healer and damage dealer, she is an excellent choice for Robo Rumble and for this trick, highly recommended to make things a lot easier.

3rd Brawler To Use: Any

- Would recommend anyone that can tank or do decent damage to the Boss, just in-case.
- Recommended Lvl: Around Lvl 6 should do just fine.

- Example DPS: Colt and similar Brawlers.
- Preferably those that have a Super that can also do nice damages, especially to the Boss just in case it spawns at the bottom area.

Other 2 Brawlers (Teammates), What To Do:

- Defend the safe from Robo Bandits!
- Let El Primo charge his Super asap, and let him do his thing.
- Just focus on the lower area (just below the safe), never go to the upper area (including those middle areas in between corners) or else you'll lure all mobs and Bosses including those are stuck at the upper corners!
- With El Primo's trick, you should be encountering less and less mobs as you go.

- Note: Keep moving to avoid disconnection from the game for being idle.

- If your team is unlucky, Bosses could still spawn at the lower area which is bad because you'll need to defeat them. The good news though is that, there would be way less mobs to deal with so you can do hit and runs to defeat the Boss.
- You can go after it but never lure it to the middle areas (middle areas in between corners), or else those mobs that are stuck at the upper corners will come to you!
- Do not let it go near the safe, if it did, kill asap. Good Luck!

- One alternative way is to let someone that can tank and lure the Boss to El Primo, then quickly die to re-spawn back and help clear all remaining mobs near the safe. This method is risky though but doable. 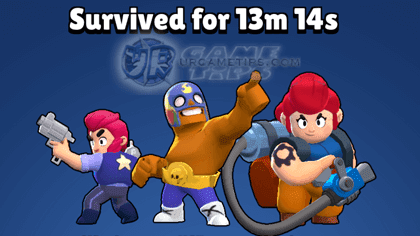 - Note: If all 3 Bosses spawned at the upper area, it would be super easy for your team.

- If the map available can't be played with the trick above, here's some suggestions that you and your team might want to use to get your target time.

Recommended Brawlers To Use

- Recommended Lvl: Around Lvl 9 to increase success chances of getting at least 6 minutes. Unlocking Star Power is optional but would recommend for some Brawlers to increase DPS even more.
- Quick Tip: Charge up and use your Super to kill Robo Bosses asap!

- Pam
- Your team's healer and damage dealer, she is an excellent choice for Robo Rumble, highly recommended to make things a lot easier.

- Bull, El Primo, Frank or similar Brawlers (choose 1).
- Keep the Boss busy while others are attacking, use Super (except Bull) to unleash more damages.

- Jessie, Colt or similar Brawlers (choose 1).
- Use Super to quickly eliminate those Bosses or mobs!

What is the Max Time Possible?

- The best time possible at the moment is 13 minutes and 14 seconds (countdown will stop the time). Depending on your team's luck and player skill, you might need a number re-runs to get this record for your Profile.

What is the Max Tokens We Can Get?

- The time requirement to get max Tokens (32) is 6 minutes and 15 seconds, beyond that it's the same.

What is the Max Enemy Spawns Possible?

- The max is 20, so if there are 20 enemies at the upper area with El Primo's trick, then there would be no more spawns.

Should I Bet 1 Ticket per Match? or More?

- Depends really, if you think your team can do well, then why not bet more to save time. Best after doing some team practice.
- Good luck! ^^