Brawl Stars: Beginner's Tips and How To Unlock and Upgrade Brawlers

Available to download on Google Play and App Store for Android and iOS devices.

- Go to Shop > Daily Deals everyday to claim your daily free rewards. If you have a Supercell ID, link the game via Setting Menu to receive a Wizard Barley skin (optional). 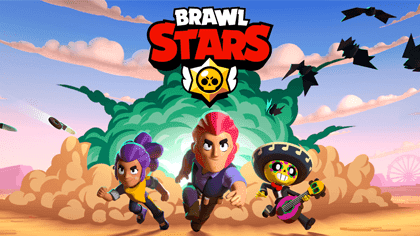 Advance in Total Trophies to Get Rewards!

- It's best to focus on getting Trophies early game to unlock free characters and various rewards from the Trophy Road (click/tap Avatar or Name to check progress).

How To Get Trophies?

- Just win any matches to earn Trophies, but be warned though because you can also lose some of them if you lose or rank too low after a match.
- Note that some Brawlers are better on some maps and events than others.

- Total Trophies is a combination of all your Brawler's individual Trophies.
- TIP: Play all of your brawlers, do not focus on just few select characters. 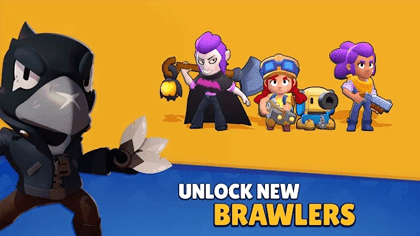 - Unlock new characters as you go, get from Trophy Road, Boxes (random), or buy from Shop using Gems (optional). Don't worry, you will eventually get all Brawlers anyway, you just need some luck and patience.
- So basically, more Brawlers = more Trophies = more rewards!

- I would highly recommend playing Solo Showdown Event once you learn the mechanics of the game, but before that, practice by playing Gem Grab or Friendly Games first to familiarize yourself on how to use your new characters in combat.

- PROS:
- Faster trophy farming if you know what you are doing.
- Best for players who can't find a decent party, or players who just wants to play solo and rely on their own skill.

- CONS:
- Requires player skill and patience.
- You could also lose trophies really fast, if you lose a lot! - Refer here for more info:
- Brawl Stars: How To Survive, Win, and Farm Trophies in Showdown

- Create a Friendly Game then invite your friends or play with bots.
- Friendly Games don't reward trophies, but you can practice any regular event.
- This is also a great way to learn how they work (including HP, Attack Range, Speed and more) and most importantly how to counter them!
- Note: All Brawlers are fully upgraded in Friendly Games.

How To Add Friends

- TIP: For best results, this game is best played with friends to execute your strategy more accurately, and as a team (including team combinations). Teaming up with random players can be good or bad depending on how well they can play (including upgrades) or at least understand the objective of the game mode.

- Upgrade all your brawlers since you need to play them all and help rank them up, especially at later stages of the game.
- Upgrading to Power Lvl 9 will unlock their STAR POWER, a bonus active or passive skill. Get Star Powers from Boxes or buy from Shop.

How To Upgrade Brawlers 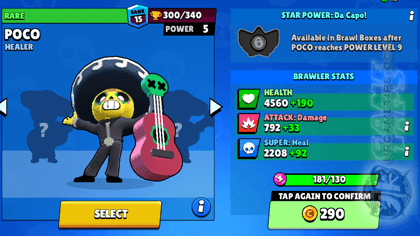 - Claim free Power Points from the SHOP > Daily Deals if available.
- Buy from the SHOP (better save your Coins for leveling your Brawlers).
- Can be obtained from Boxes (Trophy Road, or by collecting Tokens or Star Tokens).

- Brawlers that are somewhat hard for you to Rank up, upgrading will help increase their stats especially those that are so squishy. Upgrading your melee Brawlers to sustain more damage is also good.

- As much as possible, do not focus and main a character, but you may select and upgrade 1 or 2 of them a bit higher than others (at least Lvl 6 or 7) for all around use, like for getting Star Tokens, for playing Ticket Events, or for unlocking Star Powers (unlock a Brawler's Star Power at Lvl 9 to start earning them from boxes for free or buy from shop).

- Note: Play these Ticket Events first then decide which Brawler to use according to your play style, go for Healer, Nuker/DPS, or Tank Brawler. Others would also go for Common Brawlers like Shelly, Colt, Jessie or Bull.
- You can also leave 1 or 2 Brawlers at low trophies or Rank as an alternative for getting easy Star Tokens  (recommended for F2P players).

- TIP: To check what other players are mostly using, go to the "Leaderboards" section in-game then check the top 200 players and their top 4 or 6 Brawlers. Check other rankings as well.

- Optional: For Brawlers that are easy to Rank up (depending on your preference and player skill), you may level them up lightly to focus more on those that need upgrades. Recommended for F2P players.

- TIP: If you have a Brawler with let's say Rank 15 or 300 Trophies (farmed from Showdown Event) and only have Power Lvl 4 or less, forget playing 3 vs 3 team matches with random guys because the matchmaking is so ridiculous and luck based! You'll just waste time and possibly lose Trophies as well (unless for getting those Star Tokens).

- The main reason is because Matchmaking is based on Trophies, so if your team got some high Trophies but low upgrades, your team will get eaten unless you are up against a team with on par or even worse upgrades and team play.

- I would suggest going into team matches with friends using characters that works well together and with decent upgrades (note that upgrades are more important than Trophies when selecting teammates), but also upgrade your own Brawler to make him/her stronger.

- Divide Rank by 2 = Decent Power Lvl. So if you have a Rank 15 Brawler, his/her Power Lvl should be around Lvl 7 or Lvl 6 to get an edge or at least on par with most players during 3vs3 TEAM MATCH-UPS in terms of stats, and maybe before attempting to increase Rank or Trophies via team matches if you like.

- Note: You can check the Trophy and Upgrade Levels of both teams after every match as reference, and in case the game devs will do some game re-balancing.

How To Earn Tokens (To Open Brawl Boxes) 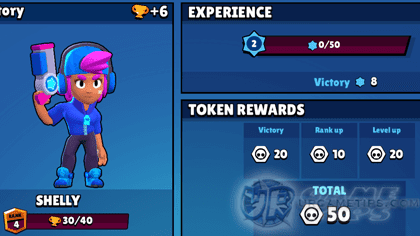 - Win Matches: Collect Tokens every after battle (limited, regenerates overtime).
- Level Up or Rank Up: The more you brawl, the more experience you gain. Each time you Rank up a Brawler or Lvl up your game account (limited per day), you will also be rewarded with tokens.

- Play Ticket Events: Spend Tickets on Special Events that generates better rewards. Tickets can be obtained from Boxes as bonus items. Tickets will only be available to buy from the Shop on weekends, for the duration of each Special Event.
- For early game, just collect the Token Stars from Special Events until you can get a decently upgraded character, to get higher rewards per ticket.
- Get from Season Rewards
- Open up new events!


How To Earn Token Stars (To Open Big Boxes)

How To Earn Coins 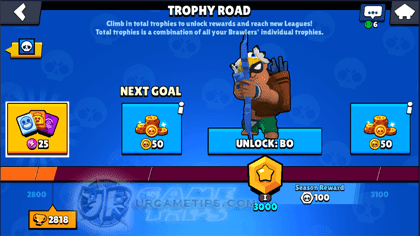 - Collect by opening Boxes, from Trophy Road rewards, or buy from Shop using Gems (optional).
- Mostly used for upgrading characters, earn them because you'll need lots of them especially at later levels.

Drops and Drop Rates of Boxes!

- Basically, learn your Brawler's and enemy's Attack Range, Speed, and more to determine when to approach, attack, dodge, or run. So it's best to play them all!

- Manual Aiming: Drag to aim your target lines for better accuracy, especially for long and mid ranged brawlers. Best used against moving targets, just predict where they will go next.

- Quickfire: Tap/click anywhere around the right side area of your screen to do quickfires (not necessary to be inside the red circle).
- NOTE: Best used by melee type brawlers or if enemy is at close range, also nice against standing targets or enemies moving straight toward or away from you. Note that quickfires doesn't work on hidden enemies.

- TIP: It is recommended to use both: drag to aim, release, then quickly tap/click anywhere to do quick attacks (auto targets nearest visible enemy).

- Check attack patterns of target, it's best to approach once they are done using their 3 attack bars to force them to attack once every 1~2 seconds (lower DPS).

- Hit and Run Strategy: Your main goal is to pressure them with damages so that they won't heal up, then close in with full power once your target has lower HP than you, works best with mid-ranged Brawlers.

- If an enemy spots you and closes in, either fight if you think you can, try to fend them off using your attacks, or dodge and run towards bushes or obstacles to take cover.

- Note: There are so many strategies that you can do, just learn from experience and mistakes.

- Hit enemies to charge their SUPER attack, even better if you can kill them too!
- A Rotating Blue Circle under a Brawler means their Super is Ready!
- A Rotating Yellow Circle under a Brawler means they are currently targeting their Super!
- Some Super attacks can also destroy obstacles or clear out bushes.
- Note: SUPER Attacks that summons objects will override them if used again. 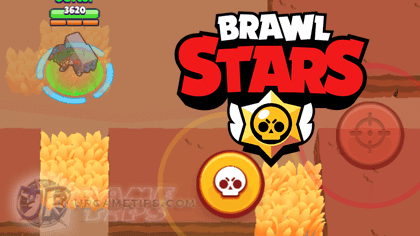 - TIP: Use your attacks to check bushes nearby or before going in.

- Predict enemy target lines to dodge attacks, this is best once they start to spam attacks every 1~2 seconds. Try not to always run in straight lines to be less predictable.
- Run sideways while shooting, you can dodge lots of damages by doing this method alone.
- Run in circles if you are up against melee or close ranged brawlers (if they managed to close in, to dodge some of their attacks).

- Accurately use your attacks and also learn when to replenish your HP while running or dodging attacks.

Other FAQs and Tips

- Depends on what you currently need, you can buy Tickets (Spend on Ticket Events that gives you the most Rewards like Robo Rumble, recommended to spend once you can get 30+ Tokens or at least 6 minutes) or Token Doubler to progress faster. More Tokens = More Boxes = More Freebies including Gems, Tickets, Token Doubler and more!

- Optional: Legendary Brawlers (wait and go for those featured and discounted).
- Optional: Skins can only be bought with Gems, except for limited event free skins.

How To Get More Gems?

- Gems can be obtained randomly from boxes as bonus items, or buy them from the Shop with real money.

How To Add Color To My Name?

How To Play Brawl Stars on PC or Laptop?

- Refer to our separate guide here:
- Brawl Stars: Gameplay Info and How To Play on PC with Bluestacks 4