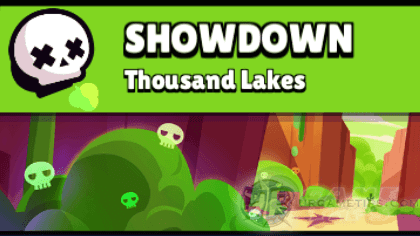 - 8 are fairly placed near the corners while the other 2 will get easy access to the center area, which would sometimes spawn lots of boxes.

- Fairly scattered across the map giving everybody a chance to get some Power Cubes. Good for brawlers that takes a lot of hits just to break boxes.
- Memorize their locations to help you decide where to go early on. Watch the "Map Preview" right from the start to check the locations of the boxes.

- Obstacles are few, bushes are still great to use as a hiding place early on, but as the poison clouds closes in, there won't be enough, so brawl your way to the center area!
- Notable objects here are those Cactus plants, use them to shield yourself from most attacks!

- Team-Ups: Team-ups are somewhat common here which would make the match too long and annoying sometimes, so be careful. I won't recommend it, but if you want to team up, be careful as well.

- Grab Power Cubes that you can and use all available bushes nearest to you (especially those at the sides early on) to keep yourself hidden.
- Good hiding locations: Try to control any of those big patches of bushes, or hide in those straight line bushes outside of the center waters (you also have a wall fence protecting you from attackers located at the center which is good).

- Survive until those poison clouds is about to reach those waters surrounding the center area.
- Next, position yourself at the very corner in between those 2 cactus plants and use them as shield.

- The one remaining at the center will likely get sandwiched, and would focus more on those that would enter the area. Hopefully, you won't get attacked by ranged Brawlers from the center while you are still standing between those 2 cactus plants (this is where teamers gets a bit annoying).

- TIP: Allow yourself get trapped by the poison clouds to let everyone enter the center area first, forcing them to brawl each other, it's ok to take some hits from the poison cloud as long that you enter last (advantage of having high HP).
- Defeat everyone while they have low HP.

- For Bull, El Primo including Darryl for example, you can use their Super to cross towards the center with minimal damages from the poison cloud, just time it well.

- Your chances of getting top 3 using this method is pretty good, as long that you survive. Much easier if there are less campers like yourself to quickly thin out survivors early on, or if there are less than 3 teamers.
- If you are losing more than winning because of these things, try to wait it out for a while to reshuffle competing players.

- Poco is actually good to use and also a good counter against Shelly (just give him enough space). Kinda hard and challenging if there are lots of long-ranged brawlers though.

- Ranged brawlers are also great here like Colt, Brock, Barley, Dynamike, Spike, Leon, Gene, and more including Shelly. Any ranged brawler will do as long that you can play them well and get 1st~5th place to farm trophies.
- Recommended Power Lvl: At least 6 or 7 for 380+ Trophies.

- Piper and Crow are also great here because they can jump from those corners to the center area to avoid getting hits from the poison clouds. Best if you can let yourself trapped from the corner, then enter last if possible to let them fight first!

- Jessie and Penny's Super can be maximized here too!
- Best if you can build up their Power Cubes to increase their stats, then control the center area later on with your turrets.

- Break boxes that you can and defeat enemies to build up your Power Cubes. Charge up your Super but don't harass them too much or they might chase you non-stop, unless you are confident that you can win against.

- Once those poison clouds closes in, either stay near the corners while nuking other Brawlers, before going in to the center area, or go near the center and defend your position (best if you were able to build up your Power Cubes).
- Continue and accurately use your attacks to defeat incoming enemies.

- Meteor Shower is favorable to Campers because it would make the match much faster, just hope that luck is on your side that it won't hit your location while hidden.

- It can also be a double edged sword for aggressive ranged Brawlers because it can disrupt their gameplay. Example: Getting hit would seriously put your squishy Brawler in trouble, but at the same time these can happen to your enemies giving you an easier time to nuke them out with just few hits.