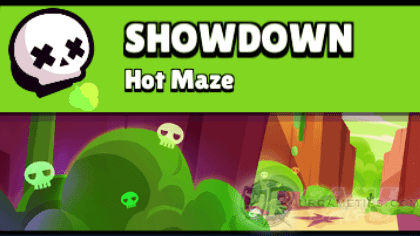 - Top and bottom areas will spawn 4 Brawlers (2 each), safe spawn locations.
- The left and right sides of the map will spawn 3 Brawlers each (6 total). Note: If you are using a squishy and slow moving Brawler and you spawned right at the middle, well good luck because some Brawlers with high move speed like Leon, can chase and kill you right away! This needs some re-balancing in my opinion.

- Some boxes are scattered within the maze, and most of them can be found at the center area. You can also check the corners of the map, but be careful though because sometimes other Brawlers likes to camp and set ambushes here.
- Memorize their locations to help you decide where to go early on. Watch the "Map Preview" right from the start to check the locations of the boxes.

- Lots of obstacles and bushes but they are too thin so scouting enemies is easier, you can also check enemies hiding within those bushes by walking next to those thin walls.
- Entrances from the outside of the maze is limited so wither go straight to the center to possibly avoid ambushes, or hide well to ambush others.
- Watch out for those poison clouds too, because if you can't make it to the center and get trapped, it's over for you, unless you have a Skill that can jump above obstacles.

- Grab Power Cubes that you can (also check corners) and try to charge your Super by harassing other Brawlers nearby (better for ranged like Shelly). Check enemy movements, the more Brawlers that goes straight to the center the better.
- Keep hidden but do not hide near entrances (to the maze or to the center) early on to avoid getting sandwiched or attacked by stronger Brawlers passing through.

- Move away safely while scouting bushes if there are Throwers or stronger Brawlers nearby, unless you can defeat or fend them off. If necessary, go to the center and hide into those corner bushes.
- TIP: Throwers usually don't go alone to the center.
- Avoid getting sandwiched or trapped, transfer quickly to a not so crowded area early on if needed.

- Once those poison clouds closes in, if possible be the last to enter the center area but make sure that no one is standing right next to those entrances that would openly ambush you. Let them fight each other first then sneak in to hide to those corner bushes.
- Luck is needed from here on depending on how many is left.

- For melee Brawlers, if possible do not initiate attacks and dodge them unless needed, attack Brawlers that are being attacked.
- For ranged Brawlers, quickly lower someone else HP to possibly redirect their attacks to that Brawler.
- Good Luck!

- Same strategy above.
- Most of the time, the end game would be a 4 or 5 way stand-offs, so having a range and decent HP is an advantage (Upgrades and Power Cubes). They would usually go and kill off low HP Brawlers first.
- Note: Once those poison clouds are too close to the center, you'll get an advantage over melee type because of the waters at the center, just keep moving around it while attacking, and don't let them come near you.

- Move speed paired with fast breaking attacks can help you quickly reach the center to grab more Power Cubes.
- Shelly doesn't have the move speed like the others, but I would include her here because she can take on enemies with higher Power cubes even if she comes late to the center.

- Quickly get Power Cubes along the way near your spawn point, then run towards the center, or gather more Power Cubes from nearby areas.
- Be careful when breaking boxes at the center because it is most likely that you'll get ambushed if there are enemies nearby. Use manual aiming to avoid hitting boxes while attacking ambushers.

- For Bull, Leon and El Primo, it would be best to run to the center asap to get Power Cubes and control the area. You have the upper hand this time because Shelly for example, doesn't have Super yet.

- For Shelly, charge up your Super quickly then go to the center, use your Super wisely when fighting (spam tap/click Super button (Yellow) instead of Normal Attacks (Red) to quickly execute).

- Watch enemy movements to check who are coming inside the center area, ambush them near the entrances if you think you have the upper hand (ex: Shelly with Super ready).
- If there are lots of Throwers, better hide for while to let them kill the others first then ambush them with your Super if available. Use those corner bushes near the center or dodge their attacks while hiding inside those center bushes

- This map can also be controlled by Throwers like Barley and Dynamike because of their advantage to throw attacks over obstacles, and most especially because of those team-ups!
- Rico is also decent to use here because you can easily scout those bushes and harass other Brawlers, forcing them to move away.
- Recommended Power Lvl: At least 6 or 7 (possible at lower Lvls too) for 380+ Trophies.

- Throwers: Never use manual aiming to fight moving targets, especially melee Brawlers. Drop your attacks right behind you when being chased.
- Rico: Throwers can still pose a threat if your attacks can't reach them, so quickly move away and avoid them. If there are too many Throwers, Rico might be a bit challenging to play.
- If you see or hear a Leon using his Super, start spamming attacks on possible paths he might take to get to you.

- Once those poison clouds closes in to the center, use your attacks to drive them away. Keep spamming your attacks to force those that are inside those bushes to move and hopefully fight other Brawlers nearby.
- Closing out matches with Rank #1 is kinda hard for this guys once you reach the center, but they have a good chance of finishing top 5.