Also refer here if you accidental exceeded or cleared Stage 6000 and you can no longer get x10 EXP Coupons from the Ad Shop because your are now over Team Lvl 60.

- Why Stage 8000+? This is the stage where you can start getting decent EXP again but only if you farm through the stages at least 2 or 3 times a day! Don't worry, this guide would help you out create teams with their recommended weapons to advance and clear stages faster. Your end goal is to reach Stage 10,000. 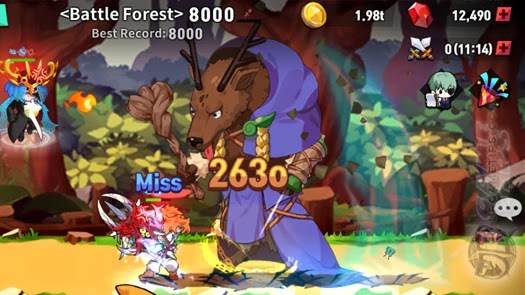 Before Breaking Through Stage 6000

- If you accidentally cleared Stage 6000 and reached Team Lvl 61, while most of your characters are still around Lvl 25, you might want to consider restarting because EXP farming from Stage 6000~8000 won't be as good compared if you just stayed below Stage 6001, and Character Lvl 25 to 30 alone requires tons of EXP!

How To Check My Accumulated EXP?

- Go to Guild Info > Guild Member > Look For Your Name > Check your Accumulated EXP.
- NOTE: If you were following the below leveling and skill upgrading guides, then you should probably have at least 35c Accumulated EXP before advancing above Stage 6000.
-  >  Best Characters To Buy and Leveling Guide
-  >  Character Leveling and Skill Upgrading Guide

- Weapons = Almost all Weapons except Karma Weapons should be around Lvl 10, to get a lot of helpful stats that I will no longer explain here like Hohoians upgrades and more.
- Karma Weapons = Just collect them all as you go for the Collection Effects and Global Stats, upgrade them to at least +2 for other game modes as well.
- Weaken Monster (God's Blessing) = MAX! Always Max together with Increase EXP AMT.
- Gold Acquisition Time (God's Blessing) = Lvl 12 is fine to get 1 minute reduction, upgrade more later on.
- Costumes = Buy all recommended costumes, refer here for more info:
-  >  Best and Recommended Costumes To Buy

- Always find other ways to upgrade these 3 key stats as you go, upgrade Weapons, Hohoians' Treasures, Character Skills, Costumes, and more.
- TIP: While in battle, switch in and Power-up all characters to 1600 for example to get easy Gems.

- You can easily 1 hit kill enemies at lower stages, so it's best to create a team that can move fast, attack wide areas, and quickly clear flying enemies. You can also use this team for other maps but focus more on Battle Forest or Old Castle Dandan if you want to reach higher stages.

- Lu Bu = For faster stage clearing because of his high Movement Speed and "Dash" skill.
- Constant = Must have character to enhance your Team's Bonus Power-up, meaning more Stages that you can clear while using this team.
- Oz = For Speed buffs (her buff also increases Lu Bu's Dash skill) and can also attack the backline.

- Light = Good character for clearing flying enemies, go with Light if you also want to maximize your Gold and Power-ups (recommended character for pushing stages later on).
- Sora = Can go straight and attack the backline area, good in-case Lu Bu doesn't use his Dash skill.
- Tempest = Optional character to use for Near Cobalt Castle map.

- NOTE: Make sure that Choco Bibi and Pooh Upooh's Lvl 30 Passive Support Skill (Purple Icon) are maxed to use their Warp and March of the Dead skills even if they are not in the party.

- To make things easier, you might want to create a custom Weapon Set for this (name it SpdMode for example), equip all recommended weapons then hit SAVE. Switch to SpdMode weapon set every time you start a new run.

- For characters that doesn't have a weapon with Team Movement Speed, just equip them with the following stat/s that are included under their weapon's Equip Effect:
- Team Bonus Power-up or Monster Weakening = these 2 are highly recommended.
- Team ATK or Team CRT DMG

I Can No Longer 1 Hit Kill Enemies!

- Once you reach higher Stages where Lu Bu and your team can no longer 1 hit kill enemies, this is the best time to switch to your main weapon set (name it AdvMode for example).

- Team Bonus Power-up or Monster Weakening = these 2 are highly recommended, prioritize and upgrade them more to get higher bonuses.
- Team ATK or Team CRT DMG = If the above stats are not available.
- Also don't forget to set all Prize Weapons (next tab after Weapons section).

My Team Can No Longer Advance!

- At higher Stages, monsters are tougher and hits harder, so it's best to focus on characters that can deal very high nuke damages and survive for as long as possible (preferably high evasion characters).
- At this point, just switch out Lu Bu and switch in Drip Soup. 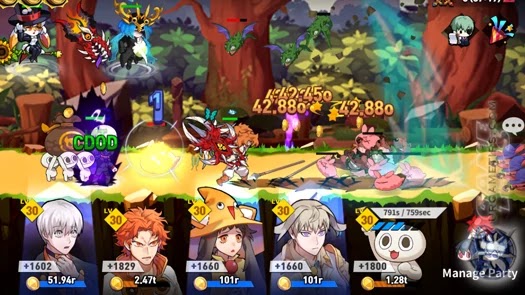 - Drip Soup = He will start to shine once you are able to increase his Evasion stat to around 200%, so upgrade all Drip Soup's Evasion stat including all Team Evasion stat that you can find from other sources. The best thing about him is that he can dodge and tank very well and can clear all ground enemies alone. As long that he is alive, even high DEF enemies can't stand long against his God's Slash!

- Constant = Must have character to enhance your Team's Bonus Power-up. His Evasion is also high, so he can tank too in case Drip Soup got defeated.

- Oz = High nuke skill, Speed buffs, AoE stun, and can also attack the backline. Decent Evasion rate, but good enough since fliers will get hit less compared to tanks. Fliers are really important here to easily clean up enemies that are still alive.

- Light = Excellent addition to help Oz clear flying enemies, so I would recommend using Light, another flier. He can nuke out enemies with his high damage skill and best of all, he also got very high Evasion!

- Tempest = Optional character that you can switch into or add for Near Cobalt Castle map, in-case you encounter a magic immune flying enemy (replace Light).
- Pooh Upooh = Great support character but kinda lacks nuking power, but definitely give her a try once you reach higher Lvls and increase her Soul Absorption Amount. Note that if you'll use Pooh's Summons as tank you might get stuck if your fliers got defeated first, especially if you managed to increase Pooh's Evasion above 200%.
- Master Swordsman = Very high Evasion rate but lacks nuking power and moves a lot...

- NOTE: Also try other characters, especially those that you can get Evasion 100% from Costumes.

- NOTE: Continue using the AdvMode Custom Weapon Set above as long that Drip Soup's Evasion is still reliable, but once enemies can easily 1 hit kill Drip Soup, then equip weapons with Evasion or Team Evasion stat under Equip Effect to try and advance a bit more.

Recommended Stats To Get

- To make things easier, you might want to create a custom Weapon Set for this (name it EvaMode for example), equip all recommended weapons then hit SAVE.

- Team Bonus Power-up or Monster Weakening = these 2 are still highly recommended, so the difference from AdvMode Weapon Set is not that much. Aim for 1.8a or higher (check your Team Info) as you go.
- Also find ways to keep increasing Team Evasion (aim 250%~300% for all team members).
- Team ATK or Team CRT DMG = If the above stats are not available. 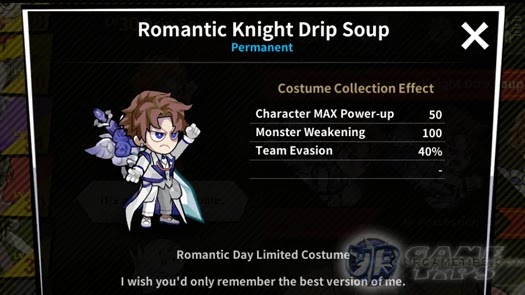 - Drip Soup = Penetrating Thorn (Karma Weapon), use Grand Curved Sword of Rim if you don't have it yet.
- Constant = Prom In Woods, or any Legendary Weapon with Team ATK (Constant doesn't have available Karma Weapons at this moment).
- Oz = Shape of Flower (still better than her Team Evasion weapon).

- Armes = Hairdressing Tools. Armes is the only character that doesn't have any of the 2 key stats above, but can equip a nice Team Evasion stat (Armes doesn't have available Karma Weapons at this moment).

Why Push The Stages?

- Unlocking more Stages would give Choco Bibi more space to Warp into, more EXP to farm!
- Your Aim = Push Stages > Increase Team Lvl > Max EXP and Monster Weaken from God's Blessing > Repeat. Return only if you think Drip Soup and your team can no longer push farther.
- TIP: Use "Madness Time" to quickly clear those pesky flying enemies or vs Tough Bosses every 500 Stages.

- Lucky Coins = Aim for Team Bonus Power-up, Monster Weakening, Team Evasion, Team ATK, Team CRT Rate/DMG, Team ATK SPD, or Hohoians Gold Acquisition Time Down.
- NOTE: If you are able to get 2 or 3 Team Bonus Power-up/Monster Weakening from your previous run, the next run might not be the same (can only reach a bit lower stages) if you did not get these stats again.

- NOTE: If you just want to farm faster EXP, I would recommend that you focus on Choco Bibi's Warp skill and your Stage Clearing Team, no need to push for now to farm faster.
- Lucky Coins = Aim for Mana Focus Amount, Mana Focus Rate, Min/Max Warp Distance, and EXP Buff to get better results! Team Movement Speed is also ok to get.
- You can also get these stats by upgrading Choco Bibi's skills and weapons. If you have extra Gems, buy his Costumes from the Costume Shop too.  Good Luck Guys! ^^

- Best and Recommended Costumes To Buy