The game will give you 2 free Costumes as your progress through the game - Warrior's "Rank No1 Warrior" costume and Dark's "Black Magician Dark" costume. To learn which Costumes we recommend buying once you get the chance, refer below.

- NOTE: The Costume Collection Effect will be applied even if you don't wear the Costumes after purchasing, but also consider the Basic Stats and Global Stats for each Costume before buying them. 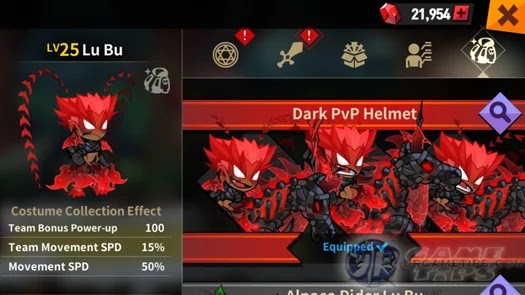 - Basic Stats would only apply to the character that own the Costumes, refer below for examples.

- Global Stats will always be in effect across all characters, refer below for examples.

When To Start Buying Costumes?

Things To Do First:

- Best after getting Heart Heater and Lu Bu.
- Would also recommend upgrading "Weaken Monster" first from the Shop > God's Blessing to Lvl 10 at least for 3200 total Gems (Weaken Monster 100), or Lvl 20 for 8200 total Gems (Weaken Monster 200).
- TIP: Do not spend all Gems on Costumes, save at least 2,000 or 10,000 Gems for other things and for unlocking new characters (if available) and upcoming Costumes. Also note that buying any Costume would also give you a free Prize Weapon for that character.

- NOTE: Only buy Permanent Costumes, check right below the "Name" of the Costume. 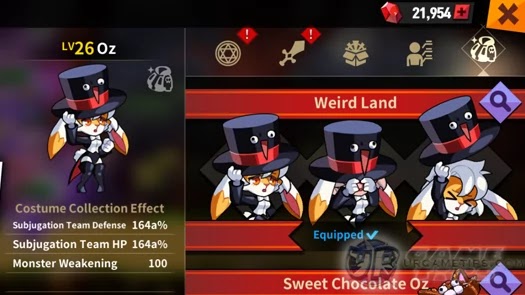 - Buy the following Costumes if there are no better options, and if you have extra Gems. It's ok to get them though if you need the Basic Stats included to enhance that character, or Global Stats included to support the whole team.

- This should be first on your list especially for new players, buy all Costumes with "Acquire EXP with Return" stat to boost your EXP gain per run and to level up fast!

- Warrior's "Rank No1 Warrior" and Dark's "Black Magician Dark" Costume.
- At the moment, there are no "Always Available" costumes with EXP stat.

- Commonly found from Hohoians Costumes, buy them once they are available again. Preferably, go for 100% or higher, lower than 50% is not great though for 8000 Gems, unless included stats are decent enough. 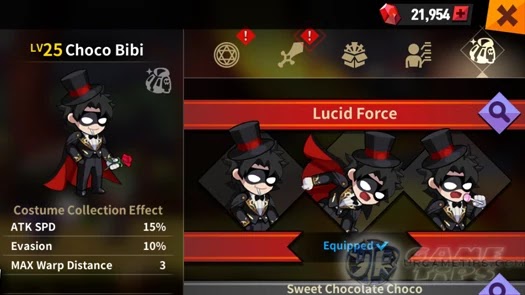 - Similar to EXP Costumes above, Choco Bibi's Costumes are also a MUST HAVE!
- Keep buying all Costumes with Mana Focus and Warp Distance related stats because the more you build up these stats, the faster you can skip through the Stages - increasing your EXP gain per run at the same time!

- Monster Weakening/Team Bonus Power-up 100 or Higher = Buy!
- Monster Weakening/Team Bonus Power-up 50 = Good, especially when included stats are decent enough for your 8000 Gems, but if a Costume includes both stats, it's a buy!
- If Lower Than 50 = Decent, but check if there are better Costumes, also consider included stats. 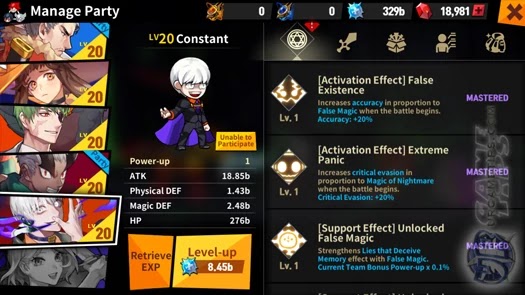 - TIP: Once you are able to unlock Constant later on, all Team Bonus Power-up Stats you currently have will greatly affect his skills and potential, so keep getting more!
- Even better if you can get all "Magic" related stats from his Costumes.

How About Character MAX Power-up?

- Better at higher Levels once you are close on hitting your character's Max Power-up (check Team Info in-game). For early game, focus on those 2 stats first.
- Follow same pattern above when buying Limited Time Costumes.

How About Pooh Upooh's Costumes?

- If you want to increase your team's damage output and survivability against Subjugation Bosses, get these stats. Recommended once most of your characters are around Lvl 25. 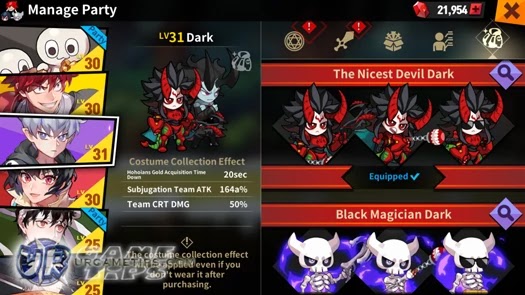 - Team Subjugation Stat 164a% or Higher = BUY!
- If Lower Than 164a% = Better check if there are more useful Costumes, but also consider included stats if they are great though.

- These stats are quite  common so I'll add it here. Preferably, go for Costumes with "Team" CRT DMG Stats, but "Non-Team" CRT DMG Stats (Basic Stats) are also good if that character is used for most game modes.

- Team CRT DMG 50%, 100% or Higher = Consider buying, especially when included stats are great too.
- If Lower Than 50% = Better check if there are more useful Costumes, but also consider included stats if they are great though.

Hohoians Related Stats and Other Stats

- If you bought all recommended costumes above, you probably have enough Basic and Hohoians related stats included from all costumes, but in-case a new "Limited Time" Costume comes out with notable Hohoians Stat, you may refer below for stat ranges to get some ideas:

- Note: Team PVP Stats and other stats not mentioned above are not available during the creation of this guide, just follow the patterns above and try to review new Costumes if they are worth buying.
- Good Luck and Happy Playing! ^^

That's it guys, thank you for checking our guide on Best and Recommended Costumes To Buy for the Idle RPG mobile game - Lucid Adventure: Idle RPG. Available for Android (Google Play) and iOS (App Store).