Galahad cards are able to ride from Deck without going through the hand. By skillfully riding on "Knight of Godly Speed", Soul cards will increase to 6, and Power and Critical can increase with their own Skill. Lastly, use Soul Saver Dragon's Skill to strengthen Rear Guards and attack!

- Budget Deck = Can be played well even without RRR cards.
- Crit Vanguard = Can do 2 or more damage per attack.
- Field Control = Can retire units controlled by the opponent.
- Higher Trigger Chance = Getting non-Trigger cards and/or adding Trigger cards can increase your chance to get more Triggers!
- Recyclable Triggers = If you have cards that can recycle a card back to your deck.
- 16,000+ RG Columns = Easy to build 17,000~19,000 Power columns.
- 21,000+ RG Columns = You can build a 21,000~22,000 Power column as long as you have the specific cards in place and conditions are met. 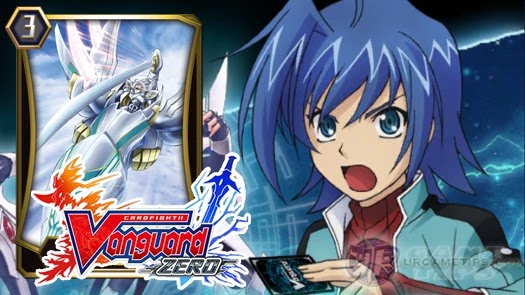 Galahad Chain Ride Cards (Must Have)

- Demon Slaying Knight, Lohengrin (G3) = Add x3~x4, used to just add "Soul" cards in case your Chain Ride failed. Nice backup Vanguard to activate Borgal's (G1) and Gigantech Dozer's (G2) skills even if you can't ride Galahad (G3).
- Swordsman of the Explosive Flames, Palamedes (G3) = Add x2~x4 if you have this card, nice 13,000 Power if you have 2 or more Grade 3 cards in play. 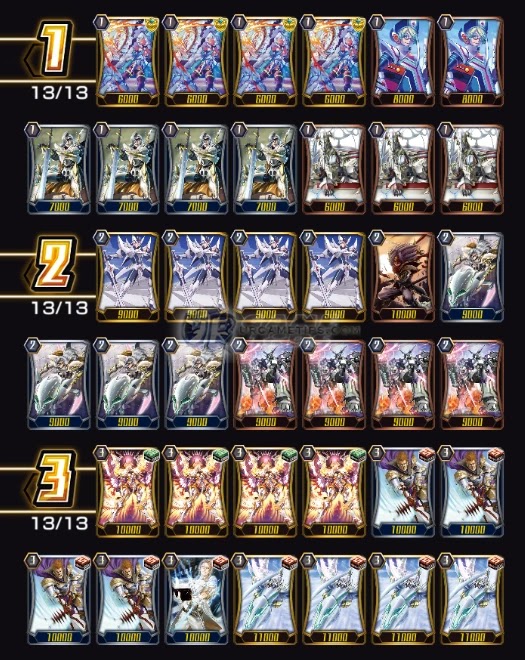 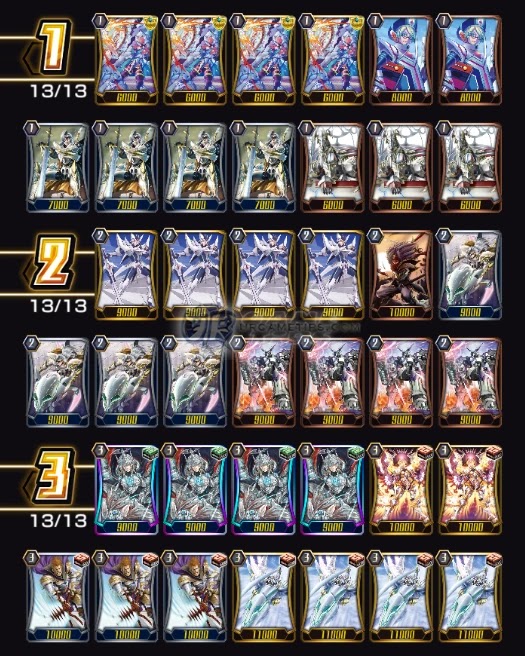 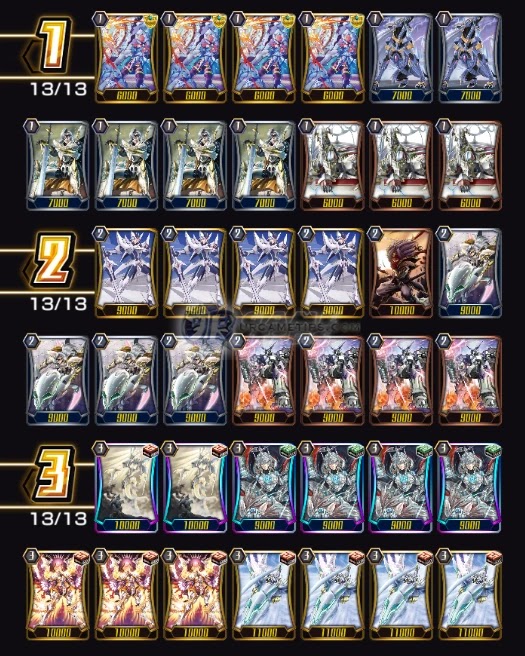 - Do not set Heal Triggers to your Galahad (G3) or Soul Saver Dragon (G3).
- It is best to set your Heal Triggers to your Gancelot (G3) to put them back into your deck in case you have them in hand, and to get an Intercept card. Also use when you have more damage than your opponent or during the later part of the battle where Triggers can be obtained with higher chance.

What If The Chain Ride Failed?

Option 1:
- If the Chain Ride failed, just continue and play with cards that you have. This is the point where backup Vanguards are very useful.

Option 3:
- Use "Soul Charge" cards depending on how many cards you need (need at least 6 total cards in Soul).
- Dream Painter (G1) = Use 9 Draw Triggers if you want to use this card.
- Demon Slaying Knight, Lohengrin (G3) = Ride first to use "Soul Charge" then ride Galahad (G3) once you have at least 5 cards in your Soul (Lohengrin (G3) will be your 6th).
- Pongal (G1) = Only if you have Soul Saver Dragon (G3), can also be used to add this card into your Soul in case your Chain Ride failed.

- Knight of Godly Speed, Galahad (G3) = Rush your opponent early on with this skill, but do not use it though if your opponent's Damage is 5, unless he/she doesn't have Sentinel Cards (PG) left (4/x), but still got Heal Triggers. Other players prefer not to use CB if opponent's Damage is 3 because it might trigger a Sentinel Card (PG), but other players are also fine with that, just 1 attack early on in case their opponent doesn't have Sentinel Cards (PG).
- Blaster Blade (G3) = Mainly to retire 1 of your opponent's Grade 2 Intercept card, to open up more attack opportunities.
- Note: Also consider other card effects that requires Counter Blasts if needed.

- Once you ride Galahad (G1) and (G2), you'll get 4 Soul cards, enough to activate SSD's (G3) skill, but doing so would disable Galahad's (G3) skill and other cards that can Power up if you have 6 cards in your Soul.

- So use SSD's (G3) skill when your enemy doesn't have Intercept cards (best scenario) and if you can no longer use Counter Blasts.
- You may also use this if you have low Power cards left during a potential final turn event, or to counter certain cards that can increase their Power above 20,000 (like OTT's Imperial Daughter (G3)).

- TIP: If you have 2 Intercept cards in play, sometimes it's better to place your SSD (G3) by retiring 1 booster, then activate it's skill.