Do "Re-rolls" to get some Triple R cards (RRR) and use them to boost your decks!

Refer below to learn which features you should prioritize early game, how to efficiently use you Stamina, deck building guide, card crafting tips, some quick battle tips, and more! 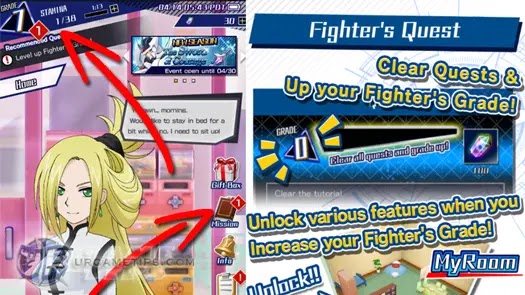 - Completing "Fighter Grade Quests" would reward you Gems, plus 100 more Gems or a Gacha Ticket every time you grade up! Increase your Fighter Grade to unlock new characters, clans, game features, and to increase MAX Stamina.

- Also focus on your Missions and complete all Daily Missions, Achievements, and Time-Limited missions as you go.

How To Use Your Stamina

Do Not Rush Your Fighter Grade Early Game!

- You can complete the quests but do not receive all rewards until needed.
- Spend your Stamina first (ex: Character Fights) until you only have few Stamina, then increase your Fighter Grade to get more.

- If you need to go offline, just spend your Stamina without increasing your Fighter Grade to let it regenerate over time. This way you can use more instead of having too much Stamina that doesn't regenerate while offline.

Getting 3 Stars, But Use Them Wisely!

- TIP: If you are aiming to complete certain stages with 3 Stars, do not let the the battle end with a win if you think you won't be able to complete one of the requirements (you'll lose Stamina per try), so during battle, go to Open > Menu > Give Up to "Retry" without losing Stamina!
- You can also use 2 decks to complete Stages with 3 Stars if you like, just use the specific deck required and win, then use your stronger deck and win without getting more than 4 Damage.

- Story Mode = Requires Stamina, follow and clear all Mission conditions to get all first time rewards.

Increase and Get Season VP Rewards!

- Try to farm VP Points to unlock various rewards like Gacha Tickets, Medals, and Coins before the season ends. VP will reset every Season so try to get all rewards that you can!

- Story Mode = Just complete them once though.
- Character Fights = Unlock Easy and Normal Modes early game to farm VP points here using Stamina. Higher difficulties will reward higher VP points but also requires more Stamina (note that you can recover Fight Challenges using Gems).
- Rank Fights = Unlocks at Fighter's Grade 11, doesn't require Stamina, and you can get VP win or lose (based on damage dealt). This is your best option for VP Farming! 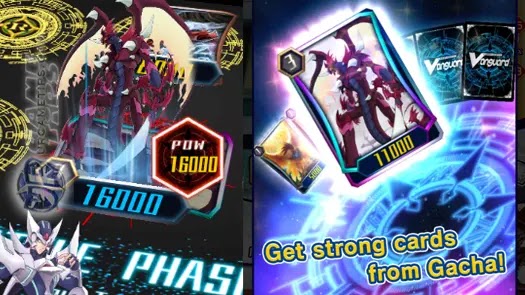 - Refer to our separate guide (link below) to learn how to re-roll early game to get RRR cards and other useful cards.
-  >  Beginner's Tips Re-Rolling Guide

- The default "Beginner's Deck" is full of filler cards, so it's better to delete it and create a new deck. Create your first Royal Paladin deck with your current cards, or you may refer to the Recommended Decks, Deck Forums in-game, or Challenge/Character Fights for ideas and combos.
- Also refer to our "Deck List & Builds" section for deck recipes and guides.

- Spend your Gacha Tickets to draw more cards (select banners you like to focus on).
- Use filler cards (Cray Elemental clan) for now if you don't have enough cards early game.
- Update your decks after drawing new cards.

- Your FV card can be any card but it's best to use the one that would help your deck's strategy.
- Example: If you want to use Royal Paladin's Barcgal as your FV, make sure to add Critical and Stand Triggers (or Stand Triggers only) to your Grade 3 filler cards. Be careful not to use your useful Grade 3 cards because you'll need to discard them while using Barcgal's skill early on. 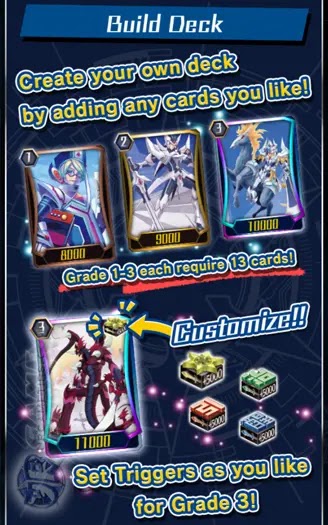 - Set your triggers depending on your deck's play style, strategy, or goal.
- If needed, adjust your Grade 3 cards to reach your preferred number of triggers.

- Critical Trigger = Gives extra Attack! Can be countered with Sentinel Cards and Heal Triggers when conditions are met. Kinda useless during defense, but still good to end battles quick.
- Draw Trigger = Draw a card, kinda ok for both offense and defense. I would highly recommend getting a decent amount of Draw Triggers to play more cards and execute more strategies!
- Stand Trigger = Stand one of your rear guards (must be in Rest state). Kinda useless during defense, but this is one good way to counter Sentinel Cards or to clear more rear guards.
- Heal Trigger = Heal one damage, unless your damage is lower than your opponent. Good way to steal away a win (luck based), or to help your cards do more Counter Blasts.

- Drive Check (Offense) = Drawing any Trigger card would let you increase +5000 Power to one of your selected units.
- Damage Check (Defense) = Drawing any Trigger card while in battle would increase +10000 Power to your Vanguard, +5000 if no trigger (the default Damage Shield bonus effect that takes place every time your Vanguard takes a damage).

- As you rank higher, you'll eventually gonna fight players with at least 2 Sentinel Cards ("Perfect Guard"), so consider getting more Draw Triggers to get your own Sentinel Cards and more Grade 2 Intercept Cards.

- TIP: For Grade 3 cards that you can get or discard from deck because of a card effect, you might want to avoid setting Heal Triggers to those units.

How To Get More Cards?

- Aside from the Gacha (Normal or Limited Events) and other freebies, the best way to get more cards early game is through Card Crafting! 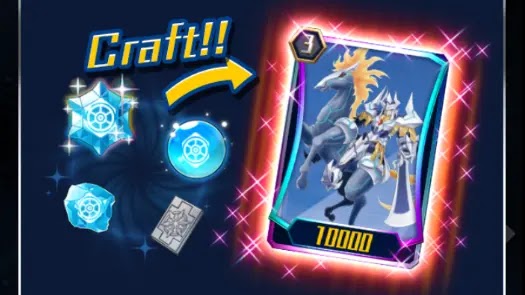 - C Rarity Cards = If you need more cards early game, just craft "Common Cards" because Crafting Stones are very common and easy to get.
- TIP: Switch card view from "Owned" to "All" while building decks to craft Common cards that you don't have. Also Use the "magnifying glass" icon to filter all Common Cards if needed.

- R Rarity Cards = You can get these Rare cards from Gacha draws since they are still easy to get, craft only if you really need the card and have extra crafting materials to use.

- RR and RRR Rarity Cards = "Double R" and "Triple R" cards would take time to craft or collect, so keep farming and save your crafting materials for later use.

- SP Cards = These shiny cards can be crafted if you have x4 copy of that card, but requires higher crafting materials than normal ones (this is optional though).

- Refer to our separate guide here:
-  >  Farming Materials and Crafting Cards Tips and Guide
- Guide above (link) would also cover how to farm and deconstruct crafting materials, plus best way to use your Gems!

-  Requires Challenge Tickets (for the specific event only) instead of Stamina. Challenge Tickets can be obtained for free from Login Rewards and from Character Fights (random drops during the event).
- Challenge and unlock higher difficulties to enjoy increased drop rates!
- Use your rewards to play the Event's Gacha to get more cards, exchange Coins (event drop) to get exclusive furnitures for your Room or to obtain more Gacha Tickets.

- Depending on the current event, you can get a RR or RRR cards just by reaching certain Ranks (Legend+ Rank).
- After the Season, depending on your final Rank, you can also get exclusive rewards like RR/RRR Cards, a Trophy, or Title.

- Take part in tournaments to get "Vanguard Coupons" based on the number of times you win and exchange them for awesome  RRR, RR other other cards!
- During the event, you'll get 1 free try per day, and even if you lose you'll still get participation rewards. The Fighters’ Tournament can only be entered into a total of 5 times each day.

- If the tournament period ends during your entry, you will receive your rewards for your wins up until that point and the tournament will end.
- There are no restrictions on the number of times you may enter into the Champions’ Tournament. However, entry into the tournament requires 1 "Championship Invitation".

- Refer to our separate guide by checking the link below.
-  >  Beginner's Quick Battle Tips
- Check the link above to learn some important in-game battle features that are often overlooked like how to use "Mulligan", how to check back the field, and how to track all Trigger and Sentinel cards

If You Need More Help

- Go to "Home" > "Menu" > "Help". All information about the game can be found here, take your time to read and understand them all. Good Luck! ^^