You can ride "Blau" by using the skill of Blaujunger and Blaupanzer to stabilize Blau to Grade 3. When Stren Blaukluger hits the opponent's Vanguard, one can Stand the Boosting unit and him/herself with the skill. You may thus collect Triggers and fully attack!

- Multi Attacks = Can attack more than 3 times in 1 turn. 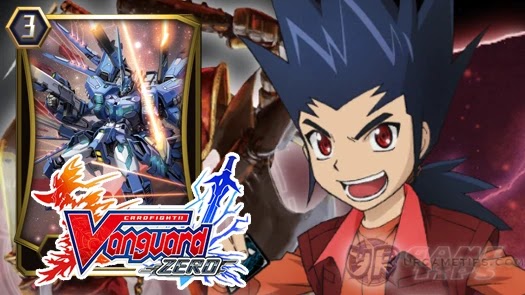 - NOTE: For this build, it is better to add high base Power Grade 2 units to increase your column's Power without relying too much on Boosters, and to give you more options when discarding cards.

- Death Army Commander (G3) = Add as filler. When your drive check reveals a Grade 3, stand this unit.
- Moai the Great (G3) = Add as filler, can reach 13,000 Power when boosted.
- NOTE: Feel free to try other cards not listed here, and add any Grade 3 cards you have available, just make sure to follow the recommended Trigger Set below. 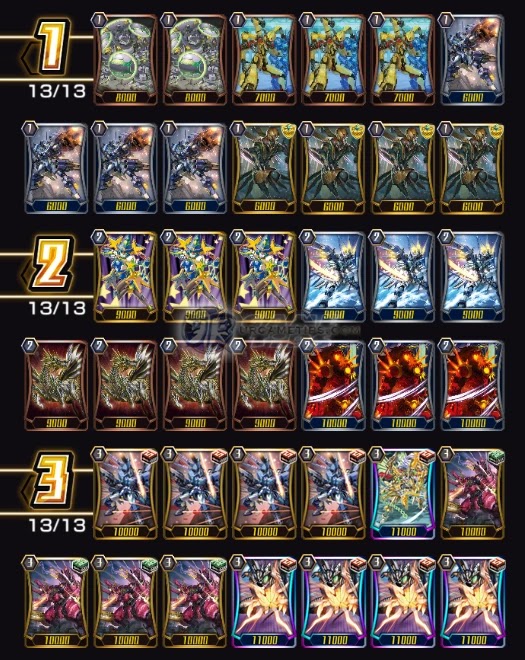 (*Use as reference, feel free to remove/add cards. Sentinel Cards ("Perfect Guards") have different activation conditions, add x4 depending on your preference.)
(*Replace x1~x2 Tough Boy (G1) with Energy Charger (G1) if you like.)
(*Replace x1~x3 Beast Deity, Damned Leo (G2) with any high base Power Grade 2 cards if you like.)

- Try to ride the "Blau" chain with a little mix to activate a "Break Ride", Blau (G1) > Blau (G2) > Ethics Buster (G3) > Blau (G3) to search cards, Counter Charge, and use Multi Attacks!
- TIP: Conserve your cards for later but consider placing some Grade 1 cards for example to the field to free up space in hand, in case you get Draw Triggers early on.
- If the ride chain failed right from the start, at least try to ride Blau (G2) to add +1,000 Power to your Blau (G3) later on, and for Counter Charging if needed.
- In case of a miss-ride, go and ride any viable Grade 3 Vanguard for now, then re-ride to your preferred Grade 3 Vanguard/s depending on the situation.

How To Use Stern Blaukluger (G3)

- (VC): If "Blaukluger" is in your soul, this unit gets +1,000 Power.
- (VC): When this unit's attack hits a Vanguard, CB2 and discard 2 cards from your hand to stand all of your units in the center column, and draw a card. This unit loses "Twin Drive!!" until end of turn.
- Clear all Intercept cards and try to land at least 2 attacks if your Vanguard's Power is still higher (3 attacks is possible).
- Discard cards that you don't need like extra copies of Blau (G1), Toolkit Boy (G1), Stern Blaukluger's (G3) and other cards that you don't need.
- NOTE: Ethics Buster's (G3) "Break Ride" skill is a Limit Break 4, so only ride Blau (G3) after Ethics Buster (G3) once you get at least 4 Damage if you want to use the "Break Ride".
- Using Ethics Buster (G3) would turbo charge your multi attacks!
- Example Combo: Attack using your rear-guards first, then use Blau (G3) and attack the Vanguard ("Break Ride" skill activates and all front rear-guards stands). If your opponent's Damage is 4 or less, land Blau's (G3) attack to stand the center column as well. Repeat steps until you can no longer use Blau (G3) to attack or buff up your rear-guards.
- With this combo it is possible to do 6 or more multi attacks in 1 turn!
- TIP: If you have Beast Deity, Golden Anglet (G2) or Beast Deity, Yamatano Drake (G3) (ideal front row units with the combo above), still use them to attack even if they have lower Power, because you can stand them to buff them up with the above combo!
- Also save some of these cards, then use them to grab the win during the later part of the battle.

- Magician Girl, Kirara (G2) + Blaukluger (G2) = Drawing a card for CB2 is ok, just don't overdo it or only if needed. Best during the early stage of the battle to give you chance to recover those CB with Heal Triggers or by using Toolkit Boy's (G1) skill.
- Stern Blaukluger (G3) = When this unit's attack hits a Vanguard, CB2 and discard 2 cards from your hand to Stand all of your units in the middle column, then draw a card.
- Brutal Jack (G2) + Blaukluger (G2) = Works great early on because you can quickly recover the CB used. If you have Toolkit Boy (G1), you can place 1 more Brutal Jack (G2).
- Note: Also consider other card effects that requires Counter Blasts if needed.

- Energy Charger (G1) = When placed, SB2 to draw a card.
- NOTE: Also consider other cards that can do Soul Blasts if needed.