✔ Strife D Leingod Published 10:22 PM
Tags
Android and iOS Game Apps
World of Legends (MMORPG) Tips and Guides
Here'a a quick guide for newbies playing World of Legends, refer below to learn how to play the game, best ways to use Gold, Elixirs, and Gems. Also check out our general Hero and Team Builds including Spells to use for beginners early game.

World of Legends is a MMORPG mobile game app available to download from the App Store and Google Play for Android and iOS devices. 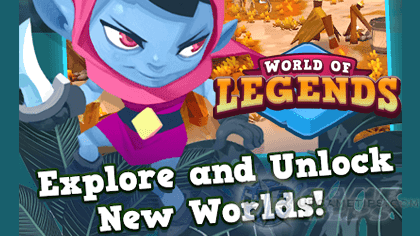 How To Restart Game?

- Go to Settings > Apps > World of Legends > Navigate and look for the "Clear Data" option.
- Note: During the tutorial, once the game asks your permission to connect to your Google Account, select "Deny". Next, it would ask you to choose an account to use, but just click/tap outside the window to continue and play using a Guest account instead.
- Note: If the game would still load your previous saved game account, try to disconnect them first via the options menu in-game.

How To Play The Game? 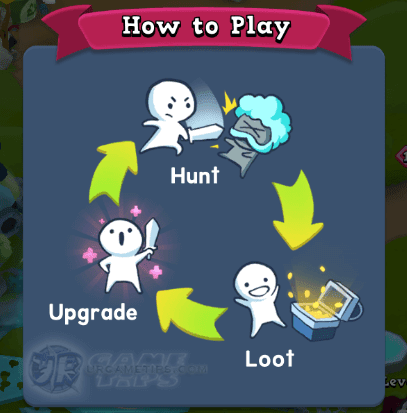 Collect Rewards and Other Freebies 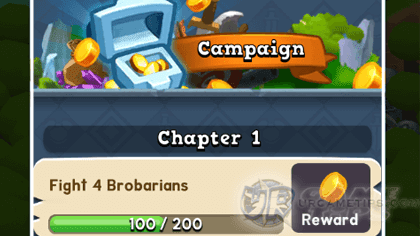 - Complete them to get various rewards, most quests will give you EXP and Gold, but others will also give you Gears and Runes, or Elixirs.

- Quest Keys: Regenerates overtime, or buy from Shop.
- This is a good way to level up faster if you have keys.

- Video Ad Daily Quest: Elixir, Gold, and Gems.
- For other Daily Quests, watch ads to double a reward (usually Gold, EXP can't be doubled).
- EXP here is great, also a good way to level up faster if you have keys.
- Check the time remaining to track when to play these quests again (reserve some Keys too).
- Note: If the quests won't activate after the cool-down (stuck at 01min left), try to restart the game.

- These NPCs can be found each map (1 permanent NPC near the center area, other NPCs randomly appears around the map), find them and complete their side-quests if you have the required collectibles.
- Rewards: Elixirs and Gold 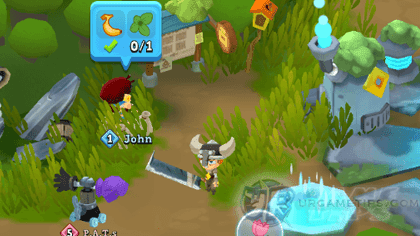 - Collectibles can be gathered from those sparkling objects and  "?" spots. Sea Critters for example can be found near beaches or rivers, while crystals and gemstones from those gem like spots.
- Wait for their cool-downs then collect again for future side-quests.

- TIP: Collect all collectibles while grinding, then do these side-quests whenever you run into them.

- You can check your progress by opening your Backpack > Lore Book.
- Collect all to complete a set, then claim your free chest that gives Runes and Gears!

Best Ways to Use Gold?

Buy Iron Chests From the Shop

- Iron Chest Rewards:
- Gears: Equip better gears or scrap what you don't need to get more Scrap Materials.
- Runes: For upgrading your Sidekicks.

- Note: The cost of chests scales with your Level because you can get better rewards from them at higher levels.
- TIP: It's best to start buying them at higher levels, around Lvl 15+, because the Lvl cap of gears from Chests is 15 at the moment.
- Players also prefer to save their Gold for future use , once they are able to get the gears that they want (example: Gems for Hero's 5th slot gear).

- Use Gold to create your own guild if you want.
- Important Note: As the guild leader, note that if you leave the guild, the guild will also disband! Don't leave while all members are actively doing Guild Quests, and also make sure that all members are able to open their Guild Chest first before leaving.

How To Use Elixirs?

For Grinding and Farming Gears

- Use Elixirs to battle bosses again without waiting for cool-downs!
- This is an excellent way to farm better Gears from Bosses.
- TIP: Challenge bosses using Elixirs until the required Elixir is way higher than the Elixir reward that you can get from that battle.

How To Level Up Fast and Grind Efficiently?

- Refer to our separate guide here:
-  World of Legends: How To Level Up Fast and How To Use Elixir


Best Ways To Use Gems?

- Use them to buy Chests from the SHOP to speed up your progress.
- Gold Chest: A good one and it's cheaper, other players prefer this over Epic Chests.
- Rune Chest: If you want to speed up your progress and upgrade your sidekicks.
- Gear Chest: If you want to try your luck and get those Legendary Gems (Hero's 5th slot gear). Some say the drop rates are higher here, not sure though.

- You can also keep them for later use, if you already have what you need.

- Gems can be obtained for free from Daily Quest (Watch Video Ads) or from certain reward chests in-game like World Boss chests and Guild chests. You can also buy them from the Shop using real cash to support the game developers.

- There are many ways to play your Hero depending on your preference or target enemies to hunt. Here's some suggestions for new players.

- You can check the Lvl and Power Ratings of your available items to quickly distinguish better gears, but also consider their Stat bonuses and Traits.

- Tanker Type Hero:
- Go for gears that gives very high HP, then grab some decent high Damage/DPS weapons. Most good ones are dropped by Bosses.

- For general use especially for beginners, just go with Tanker Type Hero, to tank for your ranged DPS sidekicks. Take note that the best tank unit in the game is your Hero.
- Use the DPS calculation above as a guide to compare the weapons you have.

- TIP: Keep at least 1 copy for each Legendary and Epic Gears especially Weapons, in case you'll need them later on for specific battles. For example, aside from your Tanker Type gears, you'll also need another DPS Type set of gears for raiding World Bosses.

- Traits are bonus spells that triggers automatically if the required condition is met.

- TIP: For beginner's during early game, I would recommend any Traits that affects or damages multiple enemies to help you clear enemy mobs while grinding.
- You can get some Legendary or Epic weapons with Traits from any Chest in the game (except Rune Chests), to get some nice early game weapons until you reach Central or Mountains Map. 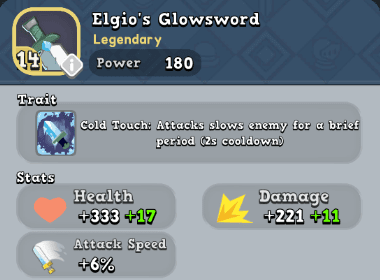 - Weapons with Slow or Freeze Traits are really useful too especially at higher level Bosses and against World Bosses as well.

- There are many ways to build a team early game depending on the available slots you have, just keep experimenting to learn how the game mechanics work. Consider the HP, DPS, Range and Move Speed of your sidekicks when forming a team.

- TIP: I would suggest aiming for 3 Archers at the back and 3 Titans in front, fill up slots with any sidekicks along the way. This basic team is viable even for the Mountains Map.

- NOTE: Some Bosses at higher levels, and most especially World Bosses will require different kinds of formations to effectively defeat them or deal huge damages.

Check Other Guides Here to Give You Ideas

- Examples:
- Best Sideckicks To Upgrade and How To Get Runes
- Maps and Boss Locations and How To Defeat Them
- World Boss Team Builds

- Your Hero and sidekicks will automatically move to the nearest enemy, but you can control your Hero to move him to a certain area, or to target a specific enemy to attack. This is really helpful at higher levels and during PVP to easily defeat high DPS enemies first.

- Use your Spells to help your sidekicks survive or damage enemies.
- The best thing about Spells is that you don't need to upgrade them, they will scale according to your Hero's Lvl. 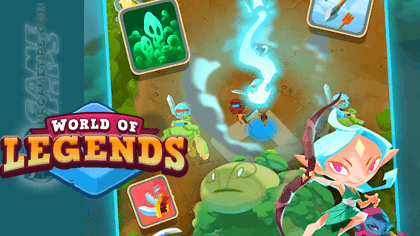 - Poison is good for dishing area damages overtime, perfect for grinding.
- This is where Titans are good to have because they can help your Hero cast more spells.
- Use other Spells as support, like Lightning Strike to nuke certain squishy enemies, Arrows to finish off low HP enemies, and many more depending on what you need.

- TIP: Some Bosses at higher levels, and most especially World Bosses will require certain Spells to use to effectively defeat them or deal huge damages.
- Example: Haste Spell is a popular Spell used by players to increase damages against World Bosses, and Heal Spells to survive longer.

What is PVP Wins Trading?

- It's a way to let 2 players get PVP wins, and claim their PVP Chest rewards.
- Example: 1 player will purposely lose to let the other win, then the other player will do the same. To make things faster, remove your gears and sidekicks depending on the Lvl gap between players. To purposely lose, just move your Hero around to avoid auto-attacking the other player.
- Note: The developers may or may not redesign this PVP feature in the future.

Why Other Players Have 2 Heroes?

- They have a Legendary Gem (equipped in 5th slot gear) called Mirror Gem, that duplicates the Hero but decreases Attack Speed.
- Gems can be obtained from any Chests in game, except for Rune Chests.

I Can't Find or See a Certain Player! Why?

- You need to add him or her as your friend first, the other party must also accept, then Teleport to him/her using the Friend Tab features.
- You guys are playing in different servers, that's why.

I'm Experiencing Some Visual Bugs or Got Stuck! What To Do?

I Want To Play This Game Using PC or Laptop, How?

- You can try and download Bluestacks Android Emulator here: Bluestacks.com