✔ Strife D Leingod Published 12:01 AM
Tags
Android and iOS Game Apps
World of Legends (MMORPG) Tips and Guides
Here's some tips and guide on how to join and defeat the first 2 World Bosses Tricia and Niki, by contributing huge damages. If you need team set-ups, refer below.

Each zone has a unique World Boss. Tricia the Terrific appears in Zone 1: Forest map while Niki the Nervous appears in Zone 2: Tomb Hill map. World Bosses spawn up to 6 times daily and last for 45 minutes after spawning (unless killed earlier). 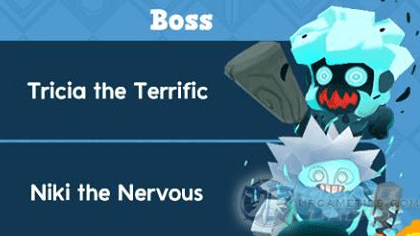 - If you still have a very low Lvl Hero with limited gears, but would still want to participate to get some rewards, just go with any team for now (ex: Archers and some Titans).
- All Archer Team: You can also try this out, just clear the minions fast.

Suggested Spells To Use:

- Lightning Strike: Just sink as many Lightning Strikes that you can for now to deal some cheap shots. If you need to dodge the first AoE attack to stay alive, do it.
- Freeze: You can also use this just before your Hero dies, to give your DPS units more time to dish more damages.

- This is most probably the most popular formation for the first 2 World Bosses, their long range will keep them safe from the their wide AoE attacks.

- Against Niki: Target the Boss right away or fight those minions first, just make sure that enemies won't reach and kill any of your Archers.

- Against Tricia: The trick here to let all Archers survive is to manually move your Hero to the upper right corner right from the start (start spamming while the game is loading). Do this to avoid pushing your center Archer forward and to lure the Boss and other minions away from your Archers.
- Note: Your Archers must survive and kill all minions, if not, refer to the alternative team formations below.

- Replace 1x Archer (front-center) with 1x Assassins, Boxingtons, or Bro-Barian to block minions and the Boss from moving forward.
- Use this if the Boss or it's minions can still somehow push through and kill 1 or 3 of your front Archers early on.

Before "Speed Time": Use Heal and Haste Spells

- Use Haste to your 4 Archers early on to quickly eliminate minions.

- Use both spells depending on the situation, if you need more healing then use more Heal Spells, but if your Hero can take the damages, cast more Haste Spells to your Archers.
- Just make sure that you Hero can survive, avoid letting his HP go below 20%.
- Note: The more Haste Spells you can cast during this time, the better!

During "Speed Time": Use Heal and Lightning Strike

- Note: Haste Spell is no longer recommended here because all units will get Haste.

- Again, balance them out (Heal and Lightning Strike) depending on the situation, if you think your Hero can't survive till the end, use more Heal Spells, otherwise sink in more Lightning Strikes for extra damages!

- TIP: Use the time remaining to maximize this strategy (Speed Time lasts 30 seconds).
- Example: If you still have lots of HP at the end of the battle, you might want to dish more Haste Spells before Speed Time and/or Lightning Strikes next time. You can also reduce your HP and increase your DPS (refer to gears section below for more info).

- Lightning Strike Alternative Spell: Freeze
- Condition: If you can't survive the battle even if you are already spamming Heal Spells (recommended for newbies with limited gears).
- Use Freeze Spell just before your Hero dies, to give your DPS units some extra time to dish more damages.

- This is probably the first thing that you need to do first, if you can't survive long enough then most probably your damages would fall short.

- As you get more better gears at higher levels, having too much survivability is also not a good idea, balance it out with DPS depending on how well your Hero can sustain damages.
- Use Heal Spells, and useful bonuses and Traits from Weapons and Gears to increase survivability.

Deal Lots of Damage Within the Time Limit

- This is where you need to tinker around your gears to balance your Survivability and DPS.
- You can also get similar gears close to the bonuses below if you don't have them.

- What we need here is it's Trait: (Cold Touch) Attacks slows enemy for a brief period (2 seconds cool-down). Perfect for 1 on 1 matches like Bosses to decrease their DPS, thus more survivability! 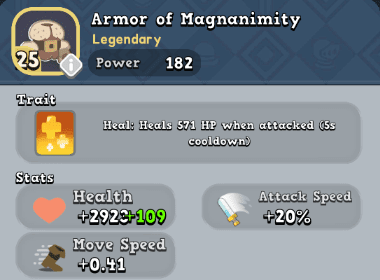 - Decent HP, and nice Attack Speed stat which we need to increase DPS. Trait's healing is a nice bonus as well. 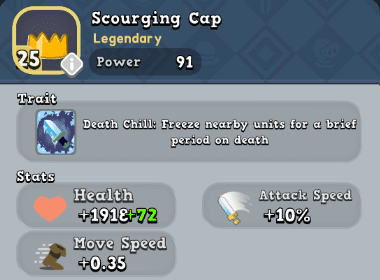 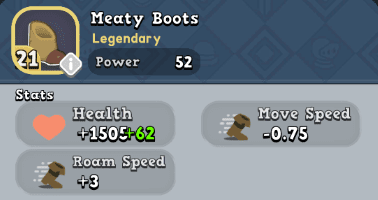 - Note: The example build and gear set up above is not the only way to help deal huge damages because there would be more stronger gears that can be farmed in the future (upcoming maps).
- Use the above setup as reference for getting stronger gears, good luck!