Yokai: Spirits Hunt - How To Re-roll to Get SSR/SR Characters Guide

✔ Strife D Leingod Published 7:00 AM
Tags
Android and iOS Game Apps
Yokai: Spirits Hunt Tips and Guides
Here's some quick tips and guide on how to Re-roll in the RPG mobile game Yokai: Spirit Hunt, to get SSR and SR characters or Yokai units.

- Re-roll only if you really want to try your luck, the tutorial is quite lengthy in this game, and the percentage rates of getting SSR characters are really low... so it might take a while before you can get what you really want.
- You can check the current rates for SSR, SR, R, and N characters in-game (Summon screen).
- Each time that you do not receive a SSR character, you'll get some points to increase chances. 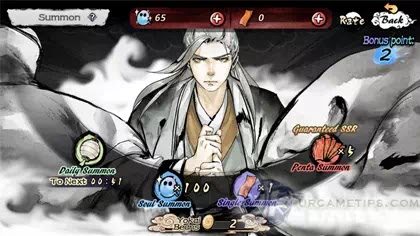 Save or Bind Your Existing Game First

- Make sure to save or bind your existing game progress first to your game/any accounts.
- Next, log out your account and play as a Guest Account.
- You can use any name for your Guest Accounts, you can change it later on anyway for 60 Yokai Souls.
- Follow and complete the Tutorial next.

Rush Through the Story Lines and Tutorials

- Follow all red arrows once you enter the first stage (Abandoned Ancient Temple), defeat key bosses, then exit the stage.

- Once you enter Taibai Temple (end of tutorial), just run and go inside the Temple, then to the underground area. Defeat or skip the stage Boss, then exit the stage (go near the stairs). 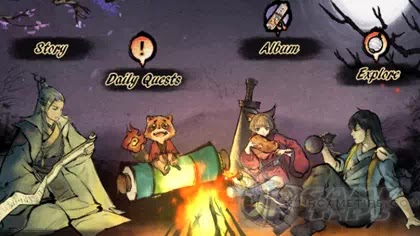 - Click on the fox "Kyuu-chan" while in the camp screen, to view your Daily Quests.
- Collect all rewards here including the first Daily Activeness Chest, that gives Player EXP.

- Go and complete them all, note that you need to properly arrange your characters first before hitting Start, move them closer for example, follow the demonstrations. After Lesson 5, you can get 1 Summon Fu. Claim all Player EXP here to hit Lvl 5. 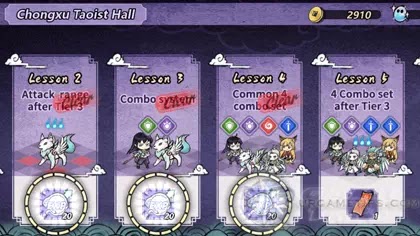 - Note: You may stop here if you want, but since the Tutorial is too lengthy, it might be best to continue since getting Summon Fus from here on is easier.
- TIP: If you really want to stop here and use 1 Summon Fu per run, then I would suggest that the next time you enter Taibai Temple, just hit the Settings (gear) button and select Exit to make things quicker.

- Important Note: If you entered the stage and it is already showing "100% Stage Completion", that's a game bug! If that happens, just go straight to the underground and exit the stage.
- Skip the guide below and go to the "Claim Rewards!" section, otherwise, just continue.


- Near the spawn point, break the 2 pots, cross the bridge and attack the blue spirit enemy, then break 1 pot nearby (lower right). Go near the entrance of the temple, defeat the hiding enemy (right side), then break another 2 pots here (that's 5 total pots).

- Go inside the temple, then defeat the boss.
- Go underground, break all 10 pots (right side first then left), defeat remaining 2 enemies here then exit.
- You should now have 100% Stage Completion.

- Go to Reward > Achievement > Stage Unlock > Claim 1 Summon Fu. If it's not available, then that means that you skipped something above, or it's because of the game bug.
- Don't worry your effort won't go to waste, because that is needed to complete the Daily Quest: (Clear Any Stage 3 Times), and to open the 2nd Activity Chest.

- Go and check your Daily Quests again and claim all rewards to hit Player Lvl 6. 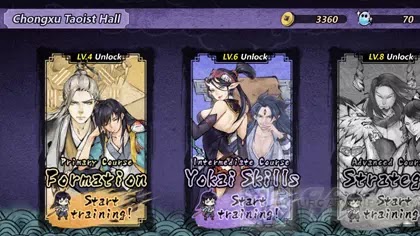 - Next, go to Taoist Hall (Yokai Skills): Same as above, complete them all. Arrange ranged characters in front of the enemy so they can attack right away, and the others to the sides - move them once the battle starts) After Lesson 9 and 11, you can get 2 Summon Fus.

- At this point, you should have a total of 6 Summon Fu, that's decent enough considering the Tutorial is too long. Now try your luck and do some Summons!

- Do not use the "Penta Summon x5", save the guaranteed SSR draw once you are done with your re-rolled account. Try your luck using "Single Summons" instead, and if you didn't get what you want, log out and play with a new Guest Account.

- Only do the "Penta Summon x5", if you are looking for a specific SSR character. Recommended for experienced players, check Album > Yokai for a list of available SSR characters.

- Once you are happy with your re-rolls, restart and bind that game to another game account.

Recommended Characters to Get?

- 1) Any SSR character since rates are too low, but preferably, go for 1 DPS Output Type (blue sword icon) or Ranged Type (red icon) character then upgrade to T3. SSR Healer is also good (if available from limited summons for example).
- 2) If you can't get any SSR, at least get some nice SR characters.

- Most SR characters are useful, especially when you need multiple teams for certain game modes. Keep and use them according to what you need, you may also use other R characters with similar skills if you want.
- TIP: Just check their Skills to see what they can do.

- Similar to Jiang Zhou Yue (starter character). You can get SR Kiki from login rewards, but if you can draw at least 1 duplicate, it would really help her evolve later on.
- Note: In this game, you can only heal your team if the healer attacks or join combo attacks, so it's great if you have at least 2 Healers

- Just check their top most ATK skill to see what they can do.
- These are characters that can do debuffs to ALL enemies(some Bosses are immune to debuffs though), or give buffs to ALL allies. You can use them as support to your main or backups characters for certain modes for example.

- Examples:
- Raishinshi (Buffer): ATK+ to all allies.
- Feng Sheng (Debuffer): 100% chance to reduce all enemies' DEF by 30% for 1 round.
- Note: If you don't have SR, reserve some R characters with similar skills (especially DEF- debuff) for certain events.

- Characters that can damage all enemies, pretty useful against multiple enemies, and to offset healers.

- Examples:
- Asura (Crit: 75% chance to inflict burning DMG equal to 10% of ATK points to all enemies for 2 rounds.) Some Bosses are immune to burn, poison and other DoT damage though.
- Huang Ju Lang (Poison).
- Bai Su Zhen (All enemies).

- SR characters that can stun, sleep, or freeze the target/s.
- Pretty useful especially against certain Bosses (some Bosses are immune to control though) or strong characters in PVP. These guys can also disrupt combos set ups.

- Devour and Evolve, How To Get More Sekkanto

That's it guys, thank you for checking our How To Re-roll to Get SSR/SR Characters Guide for the RPG mobile game - Yokai: Spirits Hunt. Available for Android (Google Play) and iOS (App Store).