Join thousands of players across the globe and try to defeat all World Bosses in the game! If you need help with team builds and strategies on how to deal huge damages, refer to the World of Legends Guides List. 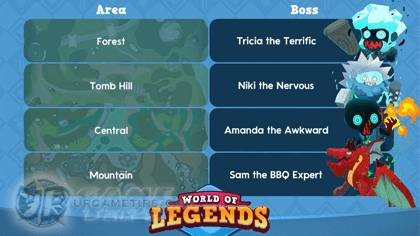 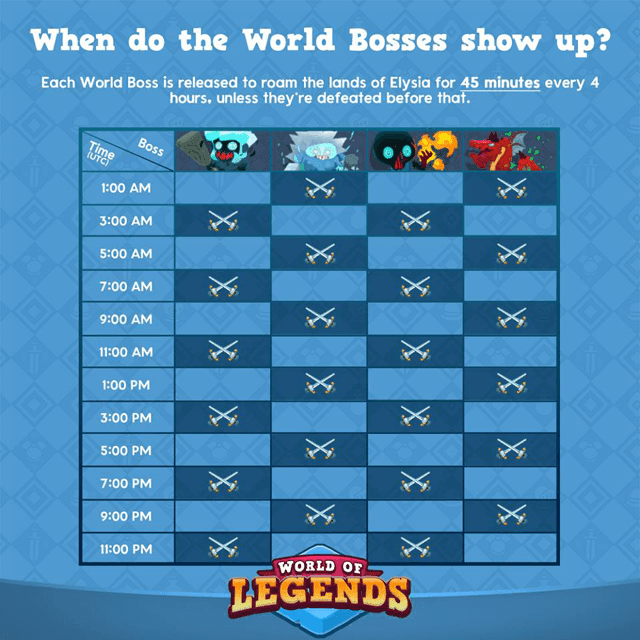 - Refer above for spawn times: Credits to World of Legends Facebook Page for the info-graphic.

- Each map or zone has a unique World Boss.

- World Bosses spawns up to 6 times daily (every 4 hours). They will randomly appear around the map but limited to their usual 3 or 4 spots (you'll memorize them quite easily as you keep joining raids).

- Note: You can also use the Chat in-game to ask other players for the location of the World Boss.
- TIP: For active parties or guilds, the fastest way to scout for the World Boss is to set players to those common spots (make sure that you are "friends" with each other), then use the Teleport feature under the Friends section to quickly go to the player where the Boss spawned.

- World Bosses last for 45 minutes before they escape.

- Guaranteed Drops:
- EXP, Elixir, Gems (consumable items used to buy items from the Shop), and Scraps.
- This is actually one of the best ways to get fast EXP and Scraps.

- Legendary Items Unique To Bosses:
- Each World Boss has their own unique set of boss loot.
- These unique Legendary items (usually weapons) can be obtained from ANY reward tier chests but your chances increases as you get higher tier chests.

How To Know If We Can Beat the Boss or Not?

- Here's an example target scenario that you can follow (check progress under World Boss icon):

- If the Boss' HP is below 85%~75% in the first 10 minutes, it's a good start, especially for easier World Bosses because they are the ones that are targeted first by most players.
- Progress should go faster as more players pours in to get rewards, unless there are less players than usual.

- For harder Bosses, around 50%~60% health after 20 Minutes is a good sign too. The first few minutes might be sloppy because other players are still busy with easier Bosses.
- Around 25% with 15 minutes left, is very doable, because at this point, all players will come and help to get their share of the rewards.

- If the given health percentages are way higher, players will lose interest and stop attacking...

When Is The Best Time To Do Raids?

- Easier Bosses can be defeated most of the time but for harder World Bosses, you might want to check during weekends (more players).