NOTE: Before anything else, please refer to our Shinobi.IO: Beginner's FAQ, Tips, and Guide for quick match up and battle tips, because I will no longer explain the basics here, thanks.

How To Get Satsu Kei

- Easy to get early game from Gold Chests and Daily Login Rewards,
- He got some decent stats but kinda lacks some HP, so be careful and don't dive into clashes or open area alone. 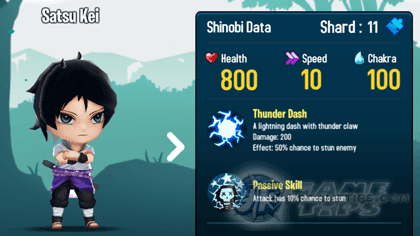 - Make this skill as your finisher move to secure your kills. Aim for those dying ones or enemies that are close to each other. If you have a full Chakra Bar though, fire your Special Skill then recharge again using normal attacks.

- This is where Satsu Kei can also shine because his stuns can really help set-up combos for you and the whole team. Note that his passive skill only works with normal attacks.

- Fairly easy to get from Gold Chests.
- The best thing about this weapon is that it can increase the potential of any character that wields it! 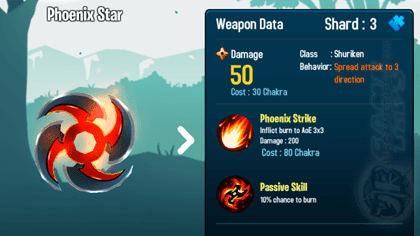 - Use Phoenix Star's normal attacks at close range to hit all shurikens. This will help you deal nice damages and charge up your character's Special Skill fast.
- Best done against stunned/slowed targets, so every time you see your stun procs, quickly move closer and spam more normal attacks, then finish with your Thunder Dash if needed.

- Even better if you can do it without relying on targeting lines (just tap/click to quickly unleash).
- Doing this method would also increase the chance to stun/burn (or both) your targets!

- Phoenix  Strike (Weapon Skill)
- A nice long ranged weapon skill, but only use this for nuking enemies from a distance when you have low HP, otherwise just focus on your normal attacks during Team Battles.

- Weapon's Passive Skill: 10% chance to burn
- Also a handful bonus, that could get you some kills!
- Note that this passive skill only works with normal attacks.

- Pet to Use: Use Any Pet.
- Satsu Kei is kinda squishy though so you really need to rely on his stuns. Get a Pet that increases survivability if you like, or go for Chakra/Chakra regen for glass cannon build.

- Fairly easy to get from Gold Chests.
- Note: If timed right (right after they activate their skills), stuns can actually cancel your opponent's skills and restart it's cool-down! 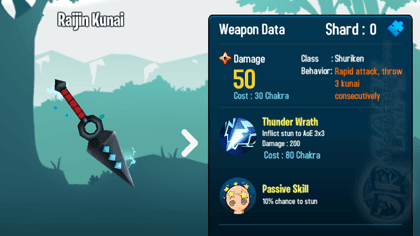 - Your role is to use your normal attacks to stun or stun lock enemies (crowd control) and support your team. Stay hidden if possible and always stay behind your teammates to avoid incoming damages.

- Thunder Wrath (Weapon Skill)
- Only use from a safe distance when you are low on HP.
- Optional: If you see a group of enemies especially during the first clash, use this but make sure to hit or else it would be a big waste of Chakra.

- Weapon's Passive Skill: 10% chance to stun
- With Satsu Kei's passive skill, stuns should proc more often with this.
- Note that this passive skill only works with normal attacks.

- Pet to Use: Use Any Pet.
- Get a Pet that increases survivability if you like, or go for Chakra/Chakra regen for glass cannon build.

Other Weapons (Including Future Weapons)

- You may also use any weapons that can do multiple hits to a single target (including Sword) or area, and as long that you can charge your character's Special Skill fast.
- Watch out for new weapons that are similar or even stronger than the ones above!

- Similar play style (refer above Team Battle: Raijin Kunai section), use this to attack and lock, or stun targets from a distance, especially enemies that are hiding from those bushes.
- Charge up using normal attacks then use Satsu Kei's Special Skill to finish off opponents!

- Using this method would allow you to go aggressive right from the start and finish the match fast. Just avoid getting ganked and focus on picking 1 on 1 fights.

- Pet to Use: Use Any Pet
- Survivability Pets, or Pets that can inflict Status Ailments (even at 5%, multi hits increases that chance).


*That's it for now guys, thank you for checking our example build and how to play guide for Satsu Kei in the Ninja Online Battle Royale IO android mobile game - Shinobi.IO.