✔ Strife D Leingod Published 9:06 PM
Tags
Android and iOS Game Apps
Sword Art Online: Memory Defrag Tier List
Sword Art Online: Memory Defrag Tips and Guides
This tier list will show you how good your Water Element 5 star characters are when it comes to burst damages and ranking events. Refer here if you are looking for specific or elemental characters that you can use for your team.

For best results, use vs their counter element and with teams. For beginners with limited number of characters, aim for a high ranked Dagger, Lance, Rapier, Dual, or Sword wielder that can also generate combos. 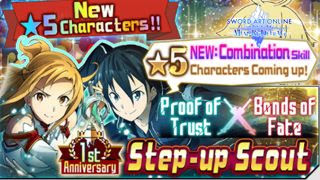 SS3 Attack Duration (Seconds):
- SS3 Attack Duration in seconds (on-click until he/she can move again)
- #.#sec* =  Average Time. Dual Wielders (and some units) will get Max/Min speed depending on combos (10~50) but will only consider their average speed and DPS.
- (Hits/Sec) determines how fast they can generate combos "per target".