Azur Lane: Beginner's Guide and How to Play on PC with Bluestacks

- Azur Lane was first introduced to Chinese, Japanese, and Korean gamers, and they made a huge success with overwhelmingly good reviews about the game. Now, the most anticipated anime based mobile game is proud to announce that it's English version is now available for Android and iOS players! 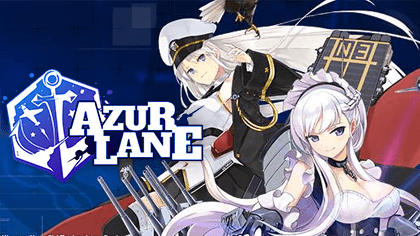 - The game mainly features collecting and controlling "MOE" personifications of warships, so if you like "waifus" and battle ships, this game is for you!

- Build your own fleet by organizing up to to 6 ships into flotilla. Different combination of ships, as well as the player's personal preference, is required to achieve desirable outcome depending on the battle situation you are in.
- Vanguard Fleet (front row): Destroyers, Light Cruisers, and/or Heavy Cruisers can be allotted to front row.
- Main Fleet (back row): Battleships, Battlecruisers, and/or Aircraft Carriers can be allotted into back row.

- Aside from completing all missions including daily activities, events for getting rewards, or claiming other freebies, here are some quick tips that might help you get started as a new player in Azur Lane.

- If this is your first time playing the game, we recommend that you do a test run first by choosing older servers, then once you are comfortable with the game's mechanics, go and select newer servers for your main account.

Which Starter Ship To Choose? 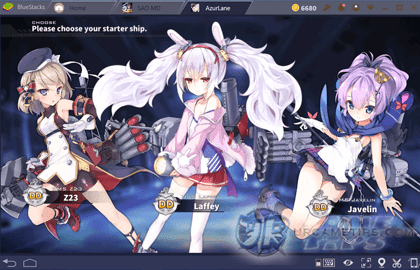 - Javelin was the most popular starter girl ship for Non-EN version, but with the recent Evasion updates, any starter ship is totally fine, but if you need to pick one, you can go with KMS Z23 for all around use.

- For beginners, aim for 2 Aircraft Carriers since they are not easy to get early game for free, build them under "Special Ship Construction" option.
- Next, construct ships to try and get better ones, would recommend "Heavy Ship Construction" first, to get a battleship like Hood, if you are lucky.

- If you now have a decent fleet to use, just continue building to get more ships, would recommend the "Light Ship Construction" option because it requires fewer resources.
- Construct 1 ship girl per day to complete your Daily Missions.

- TIP: Do not use all of your Wisdom Cubes and Quick Finishers, save a handful of them for those Limited-Time Construction Ship Events!

Do Your Recommend Re-Rolling?

- Not really, mainly because you'll eventually get the ships you like anyway, and most of the high valued ships are not Super Rare types. Also note that several high value ships can also be farmed, so don't worry about it.
- If you really want to do it though, and willing to go through those 15 minutes tutorial, then you can go for it. Aim for at least 1 Super Rare ship girl.

Do I Need To Lock All Ship Girls?

- Lock Rare, Elite and Super Rare girl ships to keep them safe. You can check the color of their background portraits too to determine their rarity.
- There is no need to lock all Common ship girls because most of them will be used to Enhance your other ships.
- Note: You need to Enhance 1 ship every day to complete your Daily Missions.
- Retiring 1 ship every day would also give you 1 Medal of Honor from Daily Missions. Go to the Build section to sell a ship that isn't locked.

- TIP: Some notable Common ship girls like Aulick, Spence or Foote (dropped from Stage 1-2), are actually great as your vanguard and farming fleet early game, but make sure that you have Fletcher as core to buff all Fletcher Class Destroyer ship girls.

- Fletcher Class are Destroyer type ship girls with an "All out Assault" Fletcher Class skill (no need to unlock, just a way to determine class).
- Fletcher fleet is a low cost farming ship girls, and mostly used by players to farm Stage 3-4's Super Rare carriers. 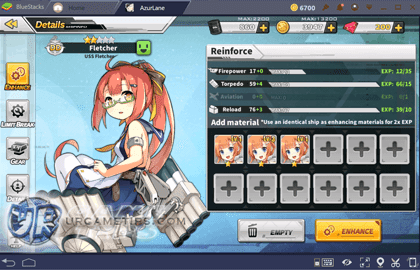 Use Identical Ships When Enhancing

- Using identical ships as materials would give 2x EXP.
- Take note of the stats that you can get from those materials, and once your base ship girl got maxed stat/s, consider using the other materials for your other ship girls.

- Go to your "Dock" first to make things easier, then check their icons located at the upper left corner of their portraits to determine their ship type, then use identical ships as enhancement materials.
- After Enhancing, you'll get all of their equipment. You may Disassemble them to get some Coins, or select "Cancel" to put them in your storage.

- Tip: Do not use your Elite and Super Rare ship girls as enhancing materials, keep their dupes for Limit Breaking later on. For unused Rare ship girls, just keep a number of dupes then Retire the others to get some Medal of Honor, or use them as Enhancement materials.

- Don't forget to change and upgrade your ship girl's gears.
- Focus first on your core fleet, but if you are using multiple fleets, you might need to balance them out if needed.

- From the main screen, go to your Storage > Items. 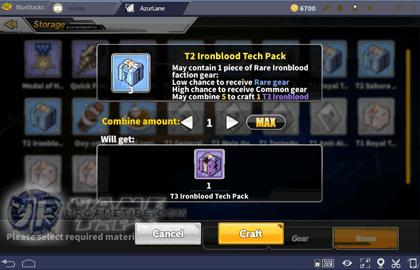 - Earn 5 pieces of T1 Tech Packs, then craft them to create 1 T2 Tech Pack!
- Same with T2 Tech Packs, craft 5 pieces to get a T3 Teck Pack.
- Doing this method would give you a higher chance to get better gears. Farm more packs by doing Daily Raids and from other events.

- As much as possible, enhance Rare or higher rarity gears, even better if they also have higher Tier and number of Stars.
- You can farm more materials by doing Daily Raids and from other events.

- Limit Breaking would increase the number of stars of your ship girls.
- Use identical ship girls or Universal Bulins/Prototype Bulins as materials.

- Note: Be careful when Limit Breaking especially at early game, because it would increase the Oil Cost of your ship girls per battle. It is best to balance them out to maximize your play time (consider number of ship girls and rarity per fleet, more Limit Broken ship girls means higher Cost and lesser play time).
- TIP: For fleets that are mainly used for farming, do not Limit Break any of them to keep their Oil Costs low.

- In order to upgrade your ship girl's skills, you need train them in the Academy Tactical Classroom. Choose the correct match of skills (just follow color) to get +50% EXP gain!
- Damage Skills; Support Skills; Defense Skills
- TIP: When assigning a ship girl to train, turn ON the skills tab above the selection window to check their skills and type or "color".
- You can farm more materials by doing Daily Raids and from other events.

- There are more features that you can explore as you progress through the game, like the Dorm where you can customize your ship girl's room to increase their EXP and recover Morale.
- Unlock Commission and Exercises (under Attack option) for even more gameplay experience!

How To Play Azur Lane on Bluestacks

- Here's a quick guide on how to play Azur Lane on Bluestacks using the best Android Emulator. 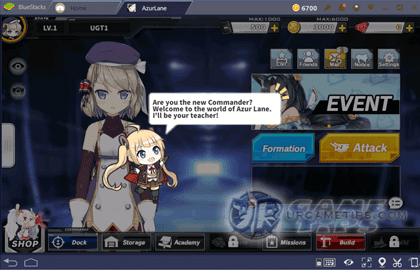 - Join over 250 million people playing their mobile games on their PC using BlueStacks!
- Download and Install this android gaming platform on your PC first: 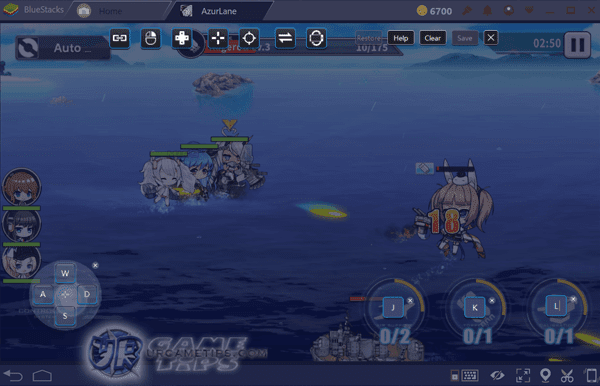 - Simply follow the key map above (Bluestacks 3 version), add more keys if you like, depending on your play style or needs.