You can get plenty of help by using weapons and rideable pets to get to the finish line before your opponents! 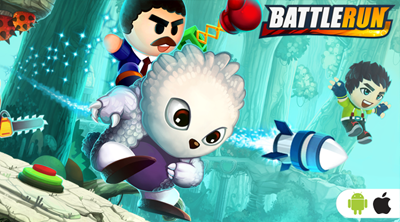 Objectives Guide
- Key Topics: How to Complete all Daily and Regular Objectives; How to add friends and create a friendly match.

In-Game Loading Screen Tips
- You can only edit your name for free once.
- Register an account to backup your progress.
- Connect with Facebook and play with your friends!

- You can play with your character by tapping on him at the main menu.
- Different characters own different sets of weapons.
- Tap on weapon icon below your character to learn more about them.

- Collect weapons from mystery boxes. Use them to gain an advantage.
- Level up to improve your weapon strength!

- You can use your weapon and your pet at the same time.
- Your pet can attack others briefly and protect you from danger.

- You get 1 Coin every 10 Stars collected.
- Level up to increase your Coin bonus percentage!
- Collect Stars to charge up and use your ride!

- You can earn free diamonds by inviting your friends to play.
- In friendly matches, everyone have the same speed.

- Make sure you collect your objective rewards to get a new objective.

- There are four different stages. Get to higher League to unlock them.
- Winners are rewarded with more points to move up the league.
- There are 5 main Leagues, namely Bronze, Silver, Gold, Diamonds, and Boss League.

Game Controls
- Tap anywhere to jump. Tap twice to double jump.
- Tap weapon icon to use it.
- Tap on the pet button to activate it once it's fully charged.
- Tap and hold the "blank" weapon icon to temporarily slow you down. This will help you dodge weapons or attack others.

Character General Weapons
- Weapons are effective depending on your current situation, if you are chasing or leading the race, and how far you are from the other racers. Level up to increase the Lvl of your weapons and their number of attacks or effect!

- Axe: Short range attack that kills an enemy. To throw farther, use jump or double jump then throw weapon.

- Egg: Short range attack that slows down an enemy. Directly hit an opponent in front, or throw this to the ground to trap enemies behind. To throw farther, use jump or double jump then throw weapon.

- Homing Missile: Tracks down and kills an enemy in front of you. To avoid this attack, simply overtake the one in front of you, or use your Pet before it hits you.

- Chainsaw: Small speed boost and kills anyone you run through. This can also be used to avoid opponents chasing you with Chainsaw or other melee attacks. To avoid this attack, use speed weapons or just use Pet to run away.

- Speedboost: Supercharge your speed to run faster. Used to overtake or to run away from melee attacks. Best when used on the "speed run" strip.

- Landmine: Drops a trap that explode when triggered. Best used right after landing from a jump, example after jumping over an obstacle. Use it on tight places, or drop on the usable sections of the map like the "speed run" strip.

- Goo: Drop a pile of goo that slows down anyone on it. Similar to Landmine's description above. If trapped, quickly jump, activate pet, or use any speed weapon if available.

- Meteor: Over powered weapon that rains large boulders from the sky. Hits multiple racers, very useful for overtaking or stalling but this item is somewhat rarer than others. Can be countered by using a pet.

- Drill: Over powered weapon that tracks down the runner in the lead and hurts everyone in it's path. Nice weapon for overtaking, and it can't be countered by using pets. If you are not the lead, simply dodge this attack.

The Pets!
- Use your pets wisely, depending on their skill, activate your pet while chasing other racers to knock them out, or use your pet's skill to trap racers behind you.
- Pet's can also protect you from harmful obstacles or weapons like Homing Missile (reserve pet for this if you are leading the race). Use your pet's speed too if someone is chasing you with a melee weapon like the Chainsaw. 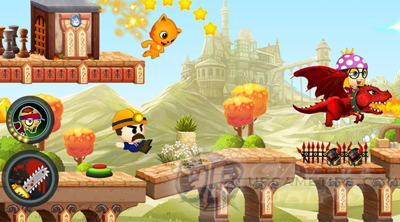 How to Summon Pets While in Battle?
- You can charge up your pet energy bar by collecting stars during the race. Once charged, press on the pet icon and you will unleash your pet's special ability.

How to Get More Pets?
- Reach Lvl 5 to unlock the Pet Egg Shop.
- Every player will start the game with Babyloo, but it does not end there.
- You can breed many more awesome pets by hatching the eggs.

Types of Eggs:
- White, Golden, and Legendary: Legendary eggs have highest chance to breed rare pets, and they also have the strongest attributes.

Pet Attributes:
- Although they might look the same, but they will have different attributes.

- All are important, but the Damage attribute looks nasty!

Account or Character Leveling
- Collect EXP through runs.
- Each time you level up, the following stats will increase:

Costumes
- You can express your personality by changing your character's look. You can change their hats, face accessories, clothes, or trailing effects.
- Costumes have no effect on the game, but you will make other players' jealous of your awesome looks. Priceless.
- Every characters you own can be customized individually.

How To Get More Coins?
- You can earn coins from collecting stars and winning races.
- Rewards given after completing an objective.
- Quickly level up to increase your Coin bonus percentage!
- Go to the Store and select the "Free Coin" for more options.
- Can be purchased from the store with real cash (optional).
- Events and more.

- Use them to buy goodies, but prioritize your objectives first. At least buy 1 Golden Egg with your Coins to get a nice Pet early game.

How To Get More Diamonds?
- Sign up with Facebook to get 100 Diamonds. Challenge your friends next to gain a number of Diamonds per day.
- Rewards given after completing an objective.
- Go to the Store and select the "Free Diamond" for more available options.
- Can be purchased from the store with real cash (optional).
- Events and more.

- Earn your Diamonds to buy some useful Diamond only item like the Legendary Pets!