✔ Strife D Leingod Published 7:07 PM
Tags
Yu-Gi-Oh BAM Guides
Spellcasters are known to their field control abilities that can nullify most normal and powerful spell cards on the field. This is a great advantage for Spellcasters that will cripple decks that greatly depends to their permanent Spells.

To learn how to create a sample Spellcaster deck, refer below to learn more. 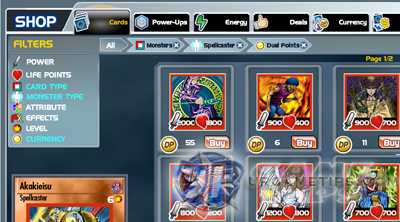 Destroy Spell Effect
- Destroy your Opponent's Spell.
- Your Aim is to control the field by destroying all spells in your way while boosting your
Spellcasters' Powers. The deck below will introduce multiple ways to buff up your monsters.
- If you need help about Card Effects, go here: Monster and Spell Card Effects

Green Phantom King (11 DP)
- Spellcaster/Earth - 900 Power / 700 Life Points
- Destroy Spell and Drain 200
- Combo with Dark Magician and Suijin. If you are having a hard time pulling off combos,
replace this card with the ones below.

White Hole (40 DP)
- Immune All: You monsters can't lose Power or can be destroyed. Takes effect at Round start.
- Get 1 Free from the Story Mode - Chapter 23
- If you are a heavy DP cash user, try to get 3 White Hole cards to become nearly invincible!

Just Desserts (11 DP)
- Special: At round start, if there are 3 monsters on your opponent's side, your opponent loses
1500 Life Points.
- Included in the Special Spells Pack from the SHOP (Deals Section).

Mirror Force (34 DP)
- Special: If a card is played in this channel, all your opponent's monsters are destroyed.
- Get 1 Free from the Story Mode - Chapter 19
- Included in the  Special Spells Pack from the SHOP (Deals Section).