Here's a simple guide for MapleStory Adventures Thief job class. Learn the pros
and cons to find if it will fit your gaming style! The magicians are masters of the mystic arts use spells to attack from a distance. 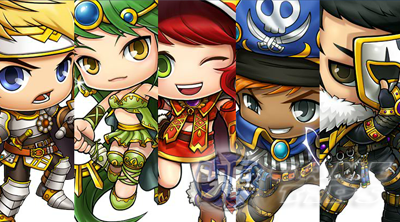 Refer to the screenshot above, thief job class: 5th character from the left.


Pros:
- Above average Critical output.
- Thieves are flexible because they can attack at close range or from a distance!
- Ranged Attacks - some skills will give you range attacks.

- Can Snipe: Look for a place that you can snipe monsters without getting any damages.
Use skills that has range attacks. First you have to kill all monsters in the area except for that particular sniping place. Your aim is to spawn all possible monsters in that sniping place. After that, go to your post and snipe them all!

MapleStory Adventures has a friendly skill set and requirements. As long that you have
the required number of skill permits and coins, you can maximize all skills! Here are some tips.

- Skill groups: 1 vs 1 skills (hits 1 enemy) and Area of Effect skills (hits multiple enemies).
- Choose and concentrate on one skill for 1 on 1 and one for area of effect.