Archero: Beginner's Tips and Guide - Best Basic Skills To Get and Build

✔ Strife D Leingod Published 12:05 AM
Tags
Android and iOS Game Apps
Arcade and Action Games
Archero Tips and Guides
Here's a guide on how to get and build skills in the arcade and action mobile game - Archero. This guide will focus more on the basic skills since they are pretty common than those that can only be unlocked from new Chapters.

You can roll and get a random skill every time you level up. To level up, defeat monsters to gather Coins and EXP. After a boss fight, you'll be given a chance to roll a lucky wheel to get a bonus skill or Coins and more EXP. 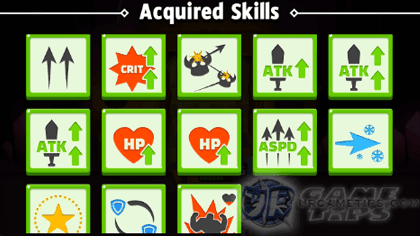 Basic Skills To Get

- A good balance between these stats is what you need for your character, adjust according to your current gears' bonus stats and Talents.
- These are also pretty common (can also be obtained from the Angel NPC), so use them to your advantage.
- To check your current skills, just hit the Pause button.

Attack Boost
- Now you can deal higher damage.
- Get at least 2, more if you need to defeat enemies faster.

Attack Speed Boost
- Now you can attack faster.
- Get at least 1 or 2, more if you need to defeat enemies faster.

Crit Master
- Critical chance and critical strike damage increased.
- Get at least 1 or 2, also increase your attack speed and number of hits to increase chances.

HP Boost
- Max HP increased.
- Depends on the difficulty of the stage, adjust according to your current gears' bonus stats and Talents.
- In case you got a lot of HP Boosts, trade some of your HP to acquire skills from the Devil NPC that randomly pops between stages.

Damage Boosters and Crowd Control Skills To Get

- Next, increase your fire power and crowd control skills. Follow the Tiers below (note: these are just recommendations based on my experience playing the game).

- Must have skills, to make things a lot easier!

Ricochet
- Your arrows jump between monsters.
- Crowd control skill, and can also knock them all back (delaying their attacks), increasing your survivability. Awesome against stages with more than 1 Boss.

- Note: Prioritize Stat Boosters over these skills, but get them if you already have a decent stats for the current Chapter, or if there are no better alternative.

Rage
- Your attacks deal more damage at low HP.
- Gives you a chance to defeat bosses at lower HP.

Diagonal Arrows +1
- Diagonal arrows +1.
- Decent alternative if you don't have "Ricochet" skill, but works well too with "Ricochet".
- This skill is really good especially if you can get close enough to a monster to land all arrows! Note that there are monsters that you won't get damaged even if you are too close.

- These skills are weak on their own, but great if all required skills are present. Totally luck based so I'll give them lower ratings.

Bouncy Wall
- Arrow bounce against walls (bounces 2 times).
- Kinda weak, but if you can get "Piercing Shot", this skill can give you a lot of damage, especially with "Front Arrow" or "Multishot" skill.

Rear Arrow +1
- Arrow fired backward +1.
- Only get if you have a "Bouncy Wall" skill, otherwise it's kinda useless.

Smart
- You level up faster now.
- Only get this though during early to mid levels, ineffective if obtained when character's level is already high or almost at MAX.

Bolt
- Your attacks cause Lightning effect.
- Jumps between monsters, ignores obstacles. Decent alternative if you don't have "Ricochet" skill.

Holy Touch
- Your attacks cause holy effect.
- Ricochets light bolts from enemies when hit. Decent alternative if you don't have "Ricochet" skill.

Death Nova
- Enemies explode into a ring of light bolts.

Bolt Circle
- Two lightning orbs circle around you.
- Ignores obstacles and hits enemies. Attacks even while moving.
- Jumps between monsters.

Ice Circle
- Two ice orbs circle around you.
- Ignores obstacles and hits enemies. Attacks even while moving.
- Slows enemies down.

Side Arrows +1
- Fires an arrow on your both sides.

- As much as possible, focus more on fire power but if the situation requires it or if you don't have better skills from that roll, then get some defense type skills.
- Follow the Tiers below (note: these are just recommendations based on my experience playing the game).
- Note: Tier 2 Defense Type Skills below are better than getting Tiers 1 to 3 Basic Skills above.

Tier 2: Recommended Basic Skills To Get

Invincibility Star
- Becomes invincible for 2 sec once a while.
- Every after 10 seconds.
- Tip: After the barrier disappears, count to 8 or 9 then enter the next stage to get extra protection from 1st wave of monsters.

Shield Guard
- A shield circles around you.
- Attacks that hits your shield will get nullified.
- Tip: during Boss fights, move your character to adjust your defense according to the movement of the shield, try to deflect enemy attacks with your shield.

Tier 1: Great Basic Skills To Get

Strong Heart
- You are healed more HP than before.

- Every time you complete a Chapter and unlock the new one, you'll be given a new set of skills (examples: Elemental Swords similar to the basic Elemental Circles, Summons, Buff Skills, Pet Skills, and more).
- Use what you think is best for your skill build above, since these skills are uncommon to get from rolls, especially the useful ones.

- Refer to the "Stats Boosters" section above for similar info.

- Randomly appears after clearing stage (usually after a boss fight).
- Trade some HP (max HP) to acquire a new Skill.

Life +1
- You gain extra life for your adventure (highly recommended).

Through the Wall
- You can go through obstacles.

Water Walker
- You can walk on the Water.

That's it guys, thank you for checking our Beginner's Tips and Guide - Best Basic Skills To Get and Build, in the arcade and action mobile game - Archero. Available for Android (Google Play) and iOS (App Store).