After using SS3, some characters can activate a new additional chasing attack or skill effect, "Tracking Circular", which locks on an enemy for a certain period of time, performing extra attacks! 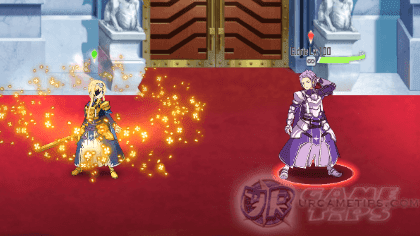 - With this skill, you can perform more combos in a short time.
- Do more combos and give a powerful blow!

- Can be used to continue combos even while fighting unpariable attacks!

How Does It Work?

- After using a SS3, the Tracking Circular skill will stay around your character until it transfers to the nearest target.
- Max is 27 Hits including the character's SS3.

- Notes:
- The Tracking Circular will never disappear and will auto target an enemy after 10 seconds of no contact. In addition, it would still inflict a number of Hits (27 Hits - Character's SS3 Number of Hits = TC Ring's Hits).

- Be careful though, because if you get hit by an enemy RANGED attack before it transfers, the TC Ring will disappear!

- Even when another player activates a Tracking Circular, your skill still remains active.
- So during multi-player modes, combos can go up even more!

Can I Activate More Than 1 TC Ring?

- When Tracking Circular is activated after another within the same team, only the new one will remain active.

What Happens When You Spam SS3s?

- The TC Ring will instantly cancel out at the beginning of the SS3 then re-activates after the last SS3.
- In other words, spamming SS3s would not bring out the full potential of TC Rings, because it could disappear even before it reaches the target.

- I think the best ones are those characters that will end their SS3 animation near the enemy because their TC Rings would hit the target right away... unless Bamco would not allow this.

What Would Happen If I Use it in Combination Attacks?

- The TC Ring would auto target itself to an enemy during and after the combination attack.
- So to maximize this effect, it is best to use characters with TC skill as a starter for combination attacks to let the TC Ring sink and land some hits first.

-  I think this skill would open up more interesting combinations attacks and combo build ups! Plan your Team builds and attack patterns!

- Note: Switching too fast back to a unit with a TC skill would also cut short the existing TC Ring animation, meaning less hits will land.
- Depending on your team, experiment and try to maximize the potential. Example: Use only 1 character with a TC skill first.

What Would Happen If I Would Do a Normal Switch?

- After using a SS3 and activating a TC Ring, you can switch to any normal unit or someone that doesn't have enough MP to let your TC Ring auto target the enemy.

- By default, the TC Ring would just stay around your character until it touches an enemy or if you switch to another character to let it auto target.
- This is also a problem if the SS3 animation of a character would end far from the enemy, the TC skill can't connect right away and you need to do some remedies.

- Possible Remedies:
- Simply run towards the enemy.
- If possible, use them as a starter when doing combination attacks.
- Switch to a character that can use SS3 upon switch (highly recommended!)

- Do normal switch to auto target the TC skill.
- Still works though if the enemy is near the sides of the screen, and your character's SS3 ends up near the target.
- Do another SS3 then switch to another character (it would cancel out the first TC though).

Example Characters To Use

- Note that the names used above are just examples.

- As you can see here, I made sure that the TC Ring will auto target the enemy and land some hits before the next TC Ring.

- TC Rings can't reach max hits because of the fast SS3 spams, it cancels out...once Alice uses another SS3.
- TIP: The higher the number of hits of your TC unit's SS3 = the better.

*Note that I only used 1 character with TC skill because it is the only one available at this moment. Feel free to experiment with 2 or 3 characters with similar skill, good luck! ^^