Knights Chronicle: Beginner's Tips and How to Play on PC with Bluestacks

- Knights Chronicle is presented by Netmarble, available to download from the App Store and Google Play for Android and iOS gamers. 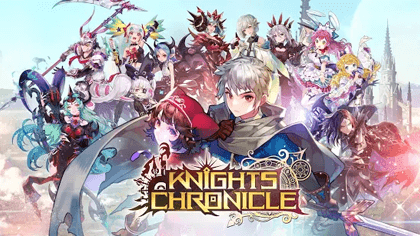 - Create a team and embark on a journey to the planet Garniel and meet over 100 heroes with their flashy, fun, and gorgeously-detailed unique skill animations and talents.

- Upgrade your Town Hall to open up more in-game features and locations that you can explore. Join a guild early on to enjoy guild perks and claim rewards exclusive only to guild members!

- Aside from completing all missions or quests including daily activities, events for getting rewards, or claiming other freebies, here are some quick tips that might help you get started as a new player.

Do You Recommend Re-Rolling?

- Yes, to make things a lot easier from the beginning of the game.
- I would highly recommend that you aim for getting Rue (4-Stars or 5-Stars). Summon her via tickets or pulls, watch out too for rate-up banners that features Rue, to get a higher chance of summoning her. 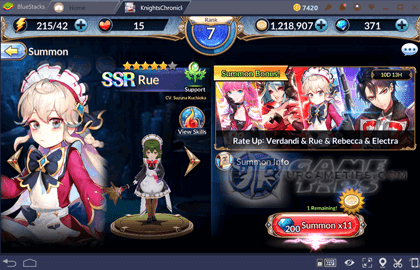 - Rue is a top tier support type unit that can be used for both PVE and PVP.
- Also try to get other SSR units that you can.

- Check this link for a list of useful characters and their tiers (overall ratings): Knights Chronicle Global Ultimate Guide. You can also check here some Advent guides, and Rune suggestions per character.

Tip for Free To Play Players

- Never pull on a featured banner if there is only 1 good character in it, especially if that character is only PVP focused. It is best to avoid them if you are a F2P player, save your Crystals instead for banners that contains 2 or more characters that can carry you through all PVE content.

- Always have Tanks, Supports and DPS characters. Depending on your play style, you can go for Dual DPS and Dual Support, as long that you have all 3 basic types.
- Tanks and Support units are highly recommended to clear most of the hard content in the game.

- Heroes all have advantages and disadvantages based on their element. 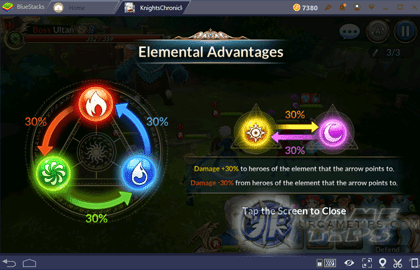 - One interesting thing that I noticed the first time I played this game is that, there's no Magic, and Magic Defense stats. The game made it simple where you only need to focus on fewer stats when upgrading your heroes.

Base and Sub Stats 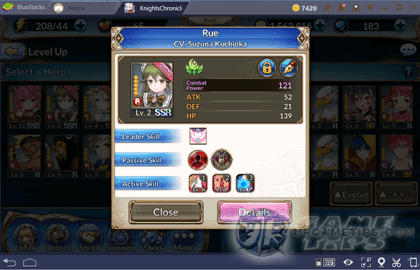 - Combat Power A number that represents your hero's overall power.
- ATK, DEF and HP will increase as you level them up, and can be further increased with Hero Talents, Runes, Guild Skills, and Enhancements. Sub Stats can also be increased by doing the same method.
- Attack Speed (affects turn order and determines who will attack first) stat can be raised with Runes or by Enhancing your hero.

- N: Normal Heroes, commonly used as fodder/materials for XP to Level Up and for Evolving.

- R: Rare Heroes, also commonly used as fodder/materials for XP to Level Up and for Evolving, but still usable though if you don't have enough SR or SSR heroes, especially early game.

- SR: Super Rare Heroes. You can get them randomly via Summons using Crystals, but some Special/Advent SR heroes can also be farmed. Better keep them and use for certain events or battles.
- Two good SR units to keep are Cordelia and Saya, but make sure to balance your resources if you want to upgrade them. 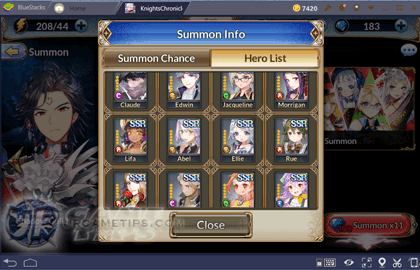 - SSR: Super Super Rare Heroes. You can get them randomly via Summons using Crystals, but some Special/Advent SSR heroes can also be farmed.
- Sid, Britten, Sinclair and Decain are farmable heroes from Advent Dungeons for example.
- Keep them all and create a core team using these units.

- *Hero's Rarity cannot be increased even after evolving.

How To Play Knights Chronicle on Bluestacks

- Here's a quick guide on how to play Knights Chronicle on Bluestacks using the best Android Emulator. 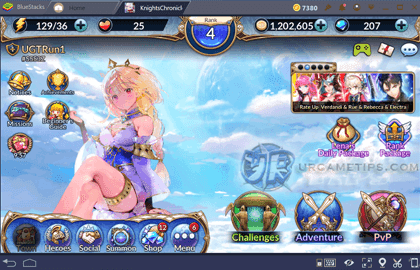 - Join over 250 million people playing their mobile games on their PC using BlueStacks!
- Download and Install this android gaming platform on your PC first:

- Open the Keyboard Control UI (keyboard icon, lower right area, or sidebar) to set Hot Keys for your game.
- The game has a existing Key Map for Bluestacks but still customize them if needed.