- This is the main reason why a lot of players prefer using Dagger, Lancer, Rapier or Dual wielders (Swords are acceptable too) over Mace as their melee core unit.

- As the battle goes on, Attack Speed can help you build up Combo Hits faster, which will give your character +5% damage for very 10 Hits Combo.
- Even better if your unit's SS3 can do around 10 hits under 3 or 4 seconds.
- Note: Max Combo bonus is currently capped at 200%. 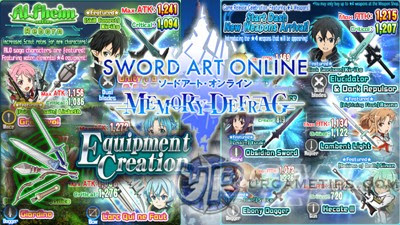 - MP gain doesn't matter much if you can take down bosses around 3 SS3s depending on the character you are using, and around 5 SS3s if you are using 2 characters and so on.

- MP gain starts to matter, once your character/s runs out of mana and the battle is still going on. This is where Dagger, Lancer, Rapier, and Dual wielders starts to shine too because they can easily re-gain mana during battle and fire more SS3s (also check attack cancel below).

- Attack Cancel is a trick where you can sink in some hits to the enemy then using "Block" to cancel the attack animation (best done right before the enemy starts to attack).
- This will allow you to quickly switch from offense to defense (Dodge or Parry), and to increase or maintain combo counts.

- This trick is doable to all types of melee weapons, but they require different playing styles or timing. Daggers, Lances and Rapiers are the best because it's easier, plus the success chance of sinking in hits for MP gain is a lot better!

- There are some situations where you need to dodge attacks that can't be parried, and success chances are based on your character's movement speed. Daggers and Rapiers can do this better and can even sink in 1 or 2 hits before they can get out of the boss's wide AoE attack range.

- Have you encountered enemy bosses where you need to run fast just to parry it's first attack? or maybe after using a SS3, the boss slides back then throws a long range attack, that you can still parry but would require you to get close just to sink in another attack or SS3?

- Yeah, the success chance of sinking in attacks are way better for Dagger and Rapier wielders, Lancers and Swords are still possible, but Dual Blades (unless at higher combos) and Maces just won't make it most of the time due to their low movement speed. Yes of course they can sink in their attacks too ("hehe") but it will no longer stagger the boss making them vulnerable to counter attacks.

- This is very important especially for ranking events, to cut more time.

So Dual Blades and Mace Wielders Are Worthless?

- Not really, like I said under "Speed Perk #2: MP Gain" above, Damage Output can override MP gain or even all Speed Perks, if the target boss can be taken down within few SS3s (especially Multiplayer).

- For ranking events, the current meta is "faster completion with minimum damage as possible" so Maces and long ranged weapon wielders are in a disadvantage when used as solo. Maces usually have high damage output and short attack animations so they can still be great if used as support nukers/burst damagers.

- This is one possible solution, but I still doubt it though, unless it's Speed Buff and duration is a lot higher...also considering switch time and cast time when it comes to ranking events.

Your Only Hope: New Skill Slots!

- Yup, Skill Slots can still make them stronger, like maybe a huge buff on their damage output and/or Speed. A Dual Blade wielder that attacks like a Rapier or close would be interesting! (update: looks like they just did it, yay!)

How About Rods, Bows and Gun Wielders?

- With the new update, ranged units can now also parry, giving you more options aside from the featured units above.