Choose wisely because it's permanent, unless you submit a "Team Change"request to Niantics though. 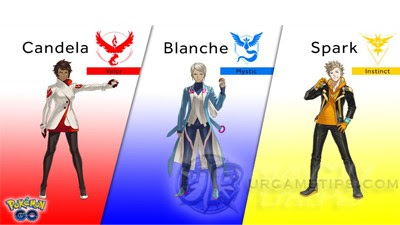 Stack Up Potions
- Make sure that you stack up Potions before and after battling, for healing attackers and defenders that got kicked out by a rival team.
- These items are necessary especially when Gyms within your location are too far from each other or from most PokeStops.
- Optional: If you need more space, you can buy a "Bug Upgrade" from the Shop if you want.

- Accessible from the SHOP.

- You need to control at least 1 Gym, maximum of 10 Gyms to be able to redeem your Defender Bonus. For every Gym you control, you can get 500 Stardust and 10 Poke Coins.
- It's not necessary to hold all of your captured Gyms all the time, just be active again right before or after the cooldown period.

- Note: Adding 1 Pokemon will automatically add another 2000 Prestige. So no additional training is needed for Gyms Lvl 1 and 2.

Option 1: Claim An Open Gym
- If you found one, enter a Pokemon with around 1500 CP or more, right away. This is ok because a newly captured Gym can hold at least 2 Pokemon, so doing this won't block other trainers who wants to join that Gym.

- Beware of "Gym Trappers" though, these Trainers will purposely leave their Gyms open or neutral, then only attacks when rival teams enters a Pokemon, to get more EXP, this is somewhat common around city centers near lots of Poke Stops.

- This is the easiest way, especially when you are gathering controlled Gyms for the bonus. Reinforce friendly Gyms by adding one of your Pokemon.
- Note: To help your team, it's better to add a weak or low CP Pokemon (500CP~1000CP) if that Gym doesn't have one yet. This will encourage other trainers to increase that Gym's Lvl and enter their own Pokemon.

Option 3: Increase the Lvl of Friendly Gyms
- If the 2 options above ain't available, you can increase the Prestige of friendly Gyms to increase it's Lvl, after that, you can add your own Pokemon.


When training at a friendly Gym, Trainers will be able to bring six Pokémon to battle instead of one. In addition, the CP of the Pokémon you are training against may be temporarily adjusted lower during your training session to generally match your Pokémon’s battle capabilities.


When you defeat the Gym Leader at a rival Gym, there will be a brief period of time where only you will be able to place a Pokémon in the open Gym.

- For every Prestige Mark reached, a Gym can gain 1 Lvl, thus another Pokemon slot. So if you can find a Gym with 3500/4000 Prestige for example, it's a good idea to train your Pokemon there and defeat at least 1 Pokemon, but if you think the next one is too strong, then just retreat.

- Note: If that Gym gets attacked by a rival team, the rule also applies. For every Prestige Mark lost, 1 defender Pokemon will be removed, so, try to enter a higher CP Pokemon than the trainer Pokemon.

Option 4: Claim A Gym From a Rival Team
- As much as possible, only take low Lvl Gyms that you can and by only using 1 Pokemon per go, to conserve Potions.
- After taking it down, quickly add 1 of your Pokemon before someone else does.
- For best results, it's best to do this on Gyms outside city centers, to at least extend the time before someone else claims it.

Option 5: Sniping or Stealing Gyms
- If you are fast enough, you can steal an Open Gym right after it turns "gray" or neutral.
- Not recommended though, and only use as your last resort right before redeeming your Defender Bonus, especially when that Gym gets attacked right after you take it.

- This is the most ideal method and how Pokemon Go should be played. Team-up with your friends, synchronize your attacks to easily defeat rival Gyms and their Pokemon. Even with high CPs, some few decent Pokemon and team up plays should be enough to take them down.

Claim A Gym From a Rival Team
- Same strategy as above, 1 team member should place 1 very high CP Pokemon and a low CP trainer Pokemon.
- Increase the Prestige of that Gym until all team members gets to enter one.

Valuable Gyms
- Gyms where your team would spend more time and resources.
- Same strategy as above, but this time, it's better to place a little higher CP trainer Pokemon (around 1200+ CP). Why? To increase the standards of that Gym, the only Trainers that can add their Pokemon are those that can defeat that 1200+ CP trainer Pokemon.
- This method will also avoid or at least lessen the number of low quality defender Pokemon added by other Trainers.

Ideal Locations to Hold Gyms
- Preferably outside city centers, isolated Gyms with only few PokeStops around it. This way, your Gym will likely get lesser attack attempts, and attackers won't be able to easily restock their Potions.

- OK, so what if your Valuable Gym gets attacked by a rival team, what can you do?
- Note that this is optional and only if you are nearby and have some extra Potions to spend.

Option 1: Increase The Prestige of Your Own Gym
- Yes it's possible, if someone is attacking your own Gym, you can also train your Pokemon at the same time to increase your Gym's Prestige. Hopefully, the attacker will run out of Potions or get discouraged because his/her pace is getting slow.

Option 2: Let Them Take It, But Cut Their Growth!
- One option is to let them enter their high CP Pokemon but defeat or take out all of their weak trainer Pokemon fast. This will stop or give them a hard time to increase their Prestige and Gym Lvl because they are forced to train with their high CP Pokemon!
- Now it's easier to gank up and re-take your Gym next time your team visits.

- Note: This is one mistake that other trainers are doing: "Stealing Gyms", although it's possible to steal back your Gym right after they clear out the last Pokemon, I would not recommend it, because it would just give them more EXP for clearing another Gym, and you'll just lose more Potions.

How Will I Know If Someone Is Attacking Our Gym? 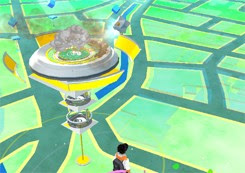 Can 2 Different Teams Gunk Up Against 1 Gym?
- Yes, it's possible. Multiple Trainers can attack a single Gym.

Why Can't I Dodge Blizzards?
- Blizzards are undodgeable.

Which Move Sets Are Best For My Defender Pokemon?
- You may refer to our guide here: Pokemon Go Info List, Type, Resistances, and Move Sets