✔ Strife D Leingod Published 2:51 AM
Tags
ZENONIA S Guides
The Boss Raid feature is a place where you can form a party with other players to defeat Raid Bosses. Although players can't get EXP from raiding bosses, they can however receive various rewards to help enhance gears. 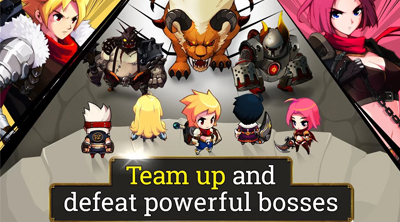 Raid Consumes 3 Raid Stamina
- You can get more from the Gift Box icon by logging in everyday at a specific time.
- Friend Point Rewards.
- or just wait for it to regenerate overtime.

[Auto Party]
- After the v1.2.0, things are now easier, just hit Auto Party and the Raid will begin automatically when the party is full.

[Invite]
- Invite if you still need party members.
- Invite friends if you want to form a team exclusive to friends only.

In-Queue Icon
- Busy or something, usually after a raid.
- If it takes too long for them to get ready, better leave the party and form another.

The Chat Icon
- You can use the Party Chat to communicate with your party members.

- If you can't find any team members, try to use the Global Chat and announce that you or your team is looking for party members.
- LFP = Looking For Party.
- MG, AD, and DC = example acronyms for Raid Bosses.
- 3/4 = They have 3 members, needs 1 more, enter the boss mentioned and hit Auto Party.

- It's ok to use Auto Mode only if your character is near the boss, to avoid misdirecting your attacks, and since all you can see is a huge pile of numbers in your screen...BUT!
- Tanks should tank decently, and not using Auto Mode somewhere else while watching their teammates die from Boss attacks! Haha!
- DPS attackers should attack decently, and not using Auto Mode just to use their powerful skills on random things like puny monsters or invulnerable objects LoL!

- Note: If your character died during a raid, do not abandon the battle, your team might still win and grab the rewards. Staying will also let your team try again, without reforming another team.

Suggested Builds
- For higher level Bosses (end game), try to focus on building your stats and skill set that can enhance your overall attack output. Rangers for example is an excellent DPS class for raids.

Use Your Raid Stamina to:
- Go and Raid to complete certain Raid related Missions.

Crystals
- Farm Crystals to Tier Up gears without spending Evolve Points or Zen.

New Update:
- You can now check the item drops of bosses via the Raid Boss selection screen, hit the (?) icon for more info.