Heroes Charge: How to Get More Free Coins 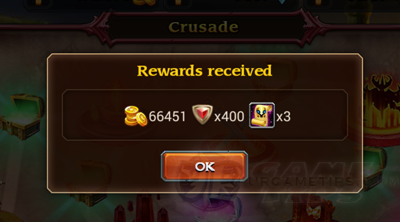 - How to Get More Free Coins -

Completion Rewards
- Do your Quests and Daily Events to get some bonus Coins.

Selling Loots
- You can do  Campaign, or Time Rift's Dwarf Arsenal then sell Items you've looted from them!
- Go to the Merchant and sell the items that will automatically show up. Items like these can also be obtained from Daily Rewards or from other freebies given to your Mailbox.

- If you are lucky, you can also get a pretty rare item called "Ether" from Gold Chests or Crusade. This item can be sold for 500,000 Coins each!

Arena Rank
- Higher rank yields better rewards, check the "Rules" to see your current reward.
- Note that Arena Rankings doesn't affect Crusade difficulty, especially at higher levels, so go on and reach what you can.

Sweeping Crusades
- The best way to get free Coins in the game, especially if you can complete all 15/15 Stages!
- Example: For a Lvl 32 Team, they can gain over 500,000 Coins by doing this.
- Rewards increases as your Team Lvl goes up, at higher Lvls you can get 1,000,000 Coins or more. Note that F2P gamers can only run Crusade once, unless you are a VIP gamer.
- For more info on how to complete Crusade early game, go here: How to Complete Crusade Stages 15/15 Sweep

Deploying Mercenaries (Guild Feature)
- Deploy Heroes in the Mercenary Camp.
- If your guildmates hires your Hero/es, you'll get a nice amount of Coins, put them there as long as possible to let them generate more Coins.

- It is most likely that your guildmates will hire Front line Heroes or Tanks, Support Heroes, and Heroes with nice stats and skills. Ex: Death Knight, Death Mage, Old Curse, or specific heroes needed for other modes like Savage One or Poisoned One for Guild Raids, and more!

- If the majority of your guildmates' Team Lvl is around Lvl 40, you might want to deploy Heroes with around Lvl 40 too, this way, you'll get a high chance that your Heroes will be hired.

- Note though that if the Guild kicked you, you won't be able to get your Coins, so use the Recall option to claim them first if you think you won't be active for the next few days.
- Recall Hero to claim Coins, or to complete the Daily Event task.

Worship (Guild Feature)
- Your guildmates can only worship a player 5 Team Levels higher than them, so try to get your Team Lvl higher than most of your guildmates. This is highly recommended for Guild Leaders, since they are always placed at the first position.
- For each worship, the player will get 15 free Stamina, and you will get Coins per worship.
- To claim your Coins, select the "Top Players" option.

Midas Touch
- Just do this once a day only, for the Team EXP, the Coins are just bonus. 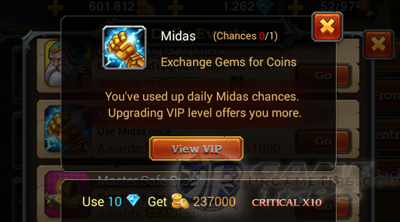 - Midas Touch has also a feature where you can multiply your Coins by hitting Criticals! If you are lucky enough, this is a nice way get some boosts if you haven't unlocked the Crusader yet.


- Common Tips to Save Up Your Coins -

- Focus your Coins on upgrading important Skills, it's the best way to spend your Coins.

- Do not waste your Coins on Bronze Chests because it ain't worth it, just use the Free chances. There is an exception here though, once you have more than 5M to 7M Coins ("enough to cover skill upgrading"), you can purchase some "Buy 10 Bronze Chests" for a chance to get useful items, heroes, or hero soul stones.

- Never sell your EXP Potions or EXP Items! Although it's tempting to sell them for Gold Coins, especially early to mid game, I would still recommend that you keep them for later Lvls, for your core or other Heroes.

- Only use the Gear Enchantments after getting your Heroes to Purple+. Enchant right after promotion, not before because you'll lose all Enchantments and lots of hard earned Coins!