For this defense game, Aden's build and role is to tank damages and to do sneak attacks to eliminate rear armies. For his army, all you need are those Cat Familiars to defeat the entire levels!.

Guide Rules!
- I recommend that you play the game first on your own to learn the basics, then
reset your game and start fresh with this guide. Basics includes moving and attacking with your sword or dragon, equipping/summoning allies, equipping/using skills or items, upgrading before the battle, upgrading Mana Pool Lvl while in battle, gathering Mana and Gems dropped by enemies, and more.


- Stage Level [1] to [20] -
Stage [1] to [5]
- Follow Tutorial then continue on.
- When using skills, you are immune to damages until the animation ends.
- Start practicing hit and runs and stalling.

Stage [6]
- Upgrade Aden to Lv 3.
- Equip Unyielding skill, one of your permanent skills. What you want here is the
short invincibility bonus when used.

Stage [7]
- Upgrade Cat Familiar to Lv 2.
- Remove Novice Wizard then add Cat Familiar. Believe it or not, all you need are
these familiar spirits skilled in long ranged attack that is capable of taking down flying creatures. No need to add any allies!
- Summon them right away when you have 10 Mana.

Stage [8] and [9]
- Unlock Earth Fey and get it to Lv 1.
- Good for stalling enemies, especially healers and those fast ghost-like enemies.

Stage [10] to [14]
- Upgrade Aden to Lv 4.
- Remove Gladium, replace with Tarde.
- Start practicing Sneak Attacks or Unyielding + Sneak Attack combo! Practice
on those cat-like and horse-like enemies. Remember, you are strong, attack ranged enemies head on, do not try to attack them with your dragon or with hit and runs!
- Refer here for the strategy: Notable Basic and Advanced Defensive Strategies

Stage [22] to [24]
- Upgrade Aden to Lv 6 and Cat Familiar to Lv 4.
- Remove Tarde, replace with Stella Surculus!, your 2nd permanent skill. What we
want here is it's knock back effect. Refer below link and start practicing Unyielding + Sneak Attack + Stella Surculus combo. Never use Stella Surculus when Unyielding is still active!
- Refer here for the strategy: Notable Basic and Advanced Defensive Strategies
- If Unyielding + Sneak Attack combo is enough to clear the mobs, save Stella
Surculus for the next clash to protect your Cats from melee enemies.

Stage [30]
- Upgrade Aden to Lv 8 and Cat Familiar to Lv 6.
- Now let's test your sneak attacking skill! You should be able to do it by now
because from here on you will be using sneak attacks a lot!.
- Quickly deploy Cats to intercept those ghost-like enemies, gather their drops.
- When those arrows starts to reach your Cats, use Unyielding and do a sneak
attack. Attack enemies with the longest range first, retreat if you can't withstand damages.
- Refer here for more strategies: Notable Basic and Advanced Defensive Strategies
- When you are able to push it beyond the first Earth Fey (far right), start earning
30 Mana then upgrade your Mana Pool to Lv 2, after that spam summon Cats.
- Tank those flying devils if you can.

Stage [35]
- Upgrade Aden to Lv 9 and Cat Familiar to Lv 7.
- Here you will start to encounter Salamanders, if there are a lot of them, it is best
to avoid their attacks. After doing a sneak attack, you can cast Stella Surculus while you are at the back of those Salamanders to avoid getting hits. You can also tank one if you can.

Stage [45] to [49]
- Upgrade Aden to Lv 11 and Cat Familiar to Lv 9.
- Just continue with same strategies, should be easy.
- Here you will start to see green zombies, refer to salamander above, do the same.

Stage [50] to [54]
- Upgrade Aden to Lv 12 and Cat Familiar to Lv 10 (MAX!).
- Just continue with same strategies, should be easy.
- Note that you can do sneak attacks, even without using Unyielding, especially at
the start of the battle when needed.
- Try to gather treasure boxes too!, you'll need these items for the final boss stage.
- You may equip Avarus Wisp Items if you have any before the battle.

- I recommend that you scout this stage first without using Ocius Scroll or any items,
until you can bring out the enemy Dragon. If you can do it, let yourself lose the battle then start the stage with an Ocius Scroll equipped (only if you are ready).
- You can farm this stage as long as you want, and put all gems to any upgrade
that you like. The above upgrades will work well though, with some items, refer below.

- Proceed when you are ready.
- Keep on summoning Cats and try to reach Lv 3 Mana Pool while in battle. You
can also use your Mana Potions!
- Just continue with same strategies, should be easy.
- Once the dragon is out, unleashing deadly strikes, clear out all range attackers
around it first, avoid it's attacks for now. If you are done, it's time to tank the Dragon 1 on 1!
- Use all items (upper right corner) that you have now, like Healing Potions and
Contego. If the Dragon managed to kill you, keep on using Anima Relics!
- Keep on summoning Cats, the more, the better! Good Luck! 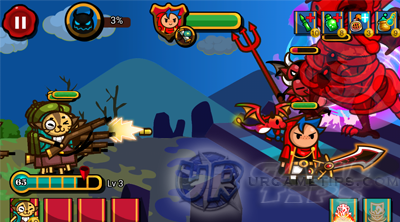