The Zombies Rising campaign will become available after the tutorials and when Wave 10 of the Allies campaign has been completed. Go back to the Main Menu to check it out! 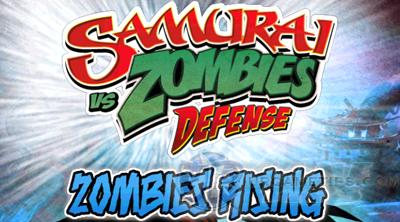 Before Moving On...
I greatly recommend that you complete the Allies (Human) campaign first before
this to get lots of bonuses like Coins for quick upgrade boosts, Charms and more. Refer below for the link.
- Samurai vs Zombies Defense: Wave 1 to 70 Walkthrough and Strategy Guide

After playing Samurai vs Zombies Defense: Classic, your Coins should be close to
300,000. If not, replay Waves 65-2 or 65-3. After 85% to 90% Wave completion rate, let yourself be killed to end the fight and to claim your 8,500 Coins! Earn as much as you want and if you like, you can also upgrade all zombies and abilities to make the game easier.

Recommended Target Team (Waves 1 to 20)
- Recruit these zombies as you go through the game.

- Zombie Archer: The only long ranged zombie that you can get.
- Ghost Ronin: Your early game fast moving tanker that slows enemies,
- Oni: You main tank mid game. Keep them up in the front lines!
- Possessed Lantern: Summon when you have Brain Lvl 3 for extra punch!
- Undead Minstrel: Increases your zombies' damage output!

Notable Zombies
- Zombie Shogun: Will probably replace Ghost Ronin or Oni if you want to
replay any Zombies Rising replay Wave levels, after Wave 30.
- Necromancer: Get from Blue or Gold presents. He can summon zombified
Panzer Warriors as his minions. Replace Undead Minstrel if you want to use him.

Recommended End Team (Waves 21 to 30)
- After completing Wave 20, things will be much more easier!

Battle Routine!
- Upgrade Brain Lvl to 2 or 3 at the start of the battle to summons hordes!
- Your job is to sneak attack archers or mid-ranged horsemen to cut their damage
output. Use Rotten Sushi if necessary to replenish your health bar. Abilities like Night of the Dead, Lethargy or Grave Hands can also help you accomplish this.
- When Death from Above (flying creatures) are tanking your melee enemies, kill
all range attackers behind them including those tall ones with sticks. Summon all zombies to help your flying creatures while keeping their ranged comrades busy. Push your horde next for the win.
- If Priests appears as their reinforcements, do not let them go near their front lines.
You can't kill all of them but you can keep them away from their comrades! Sweep them out once your zombie horde breaks through!

Other Helpful Strategies
- After Wave 20, simply summon Spider Ladies to destroy all enemies! 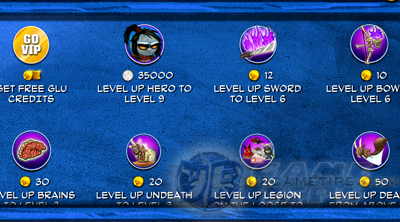 Upgrades Before Wave 20
- Lethargy 5
- Oni 4
- Possessed Lantern 3
- Undeath 2
Notes (Wave 11~20)
- Start using Power or Haste charms.
- Wave 11: Ghost Warrior and Zombie Archer will do just fine here.
- Wave 12: Start using Night of the Dead and Lethargy! Power charm will do here.
This time, their archers will have a Priest! Same strategy will still work here though, just ignore their healer when attacking their archers.
- Wave 13: Replace Hopping Torso with Demonic Healer. Summon only when
you have Brain Lvl 3 or higher.
- Wave 14: Add Oni, remove Zombie and Zombie Spearman.
- Wave 15: Add Possessed Lantern, best to use when you have Brain Lvl 3. Sneak
in to attack archers then back out. Slowly lessen their numbers.
- Wave 16: Attack Priests to halt their advancement and to isolate them away from
their allies. Just summon your zombies and trust them that they can destroy those big enemies.
- Wave 17: Replace Demonic Healer with Undead Minstrel. Use a Peace Charm
here too. Same as Wave 16 but this time, they will have reinforcements. Just let them pass while keeping their Priests busy, away from their allies. Attack their archers and mid range horsemen too if you have the chance. Use some rotten sushi to replenish your health.
- Wave 18: Use your Possessed Lanterns to blow all Assassins near your gate!
- Wave 19: Same strategy. If you are having trouble, use a Peace charm.
- Wave 20: Use Peace charm then when the battle starts, quickly use 1 to 3 Grave
items to increase your Brain Lvl. Let Death from Above tank their melees. Try to keep an Oni and Ghost Warrior in the front lines. Attack archers and do not let them kill your flying creatures, use Rotten Sushi to keep you going.
______________________________________________________________________

Upgrades Before Wave 30
- Raise Dead 5
Notes (Wave 21~30)
- You can start using any charm except Peace charm for now.
- Start using Grave or Graveyard to boost your Brain Lvl for Spider Lady.

- Wave 21: Remove all allies and only recruit Spider Lady. Use Raise Dead and
Lethargy abilities.
- Attack those tall enemies and archers to help. Avoid those bombers though.

- Wave 23: You can also substitute Zombie Dragon for Lethargy now.
- Wave 30:  Let the flying creatures tank the boss then just summon Spider Ladies!
No need to use Zombie Shogun. Sneak the use your Raise Dead ability to summon Spider Ladies in front of those Frostie Archers!