Torchlight II: What Are the Differences Between Modes or Difficulties?

✔ Strife D Leingod Published 12:25 AM
Tags
Torchlight II Guides
Here are some first hand look of the different game modes or difficulties in Torchlight 2. If you can't decide which mode you want best to play, this list might be able to help you.

Unlike Torchlight 1, Torchlight 2's item drop rates will not depend on your current difficulty!, but this time, gold drop rates will decrease as you go up in difficulties. This will greatly impact your gameplay because you might need to spend a more time farming Gold to upgrade your gears. 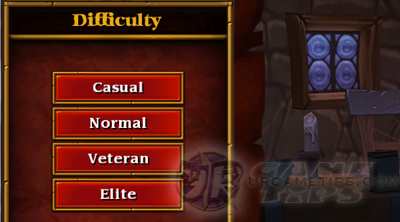 Normal Mode
- Recommended for newbies! If you want to learn the game's gameplay features and battle
plays, then this mode is a good choice for you to start. Practice and familiarize yourself!
- Offers average challenge to players.
- Average Gold gain per drop.
- Your Pet rarely flees under Aggressive Mode.
- Jumping into monster mobs is risky from now on!
- Doesn't require lots of Potions. You won't even notice yourself buying potions in shops.

Veteran Mode
- Recommended for experienced players. Example: Players who played Torchlight 1 or
players who are familiar with this type of games.
- Good mode to practice your skill builds and combos.
- Monsters are stronger due to their higher health, attack and more.
- Increased number of champion/elite/normal monsters.
- Lesser overall Gold gain than Normal Mode.
- Your Pet will occasionally flee under Aggressive Mode.
- Average Potion usage.

Elite Mode
- Much more challenging! Might require in-depth understanding of the game.
- Test your skill builds and combos here! See how they fare against these monstrous
creatures.
- Monsters are much more powerful now due to their higher health, attack, stats, armor,
resistances and more.
- Increased number of champion/elite/normal monsters.
- Monsters can 1 hit kill you if you don't have proper or better equipments!
- Has the lowest overall Gold gain.
- Your Pet will often flee under Aggressive Mode, specially early game.
- Enemy shields are somewhat harder to shatter, specially early game.
- Watch Out! Traps are deadlier now!

- You will now be using more portals or pet travels than usual to purchase items like potions,
specially at early game because monsters can really hit you hard now!
- Before fighting champion/elite monsters, stock up potions to help you survive throughout
the battle. Use the best potions you can get!

- Time spent will be longer, unless you have stored some items to boost your new character.3


Hardcore Mode
- Click the box before the option to activate.
- Death is PERMANENT! Only for the BRAVE!
- Means you play like a real person, if you die, it's game over! Instead of re-spawn options, it
will display this message instead:

"You Have Perished!
Your fight is ended.
Memories of you will fade.
Silence, all is lost." 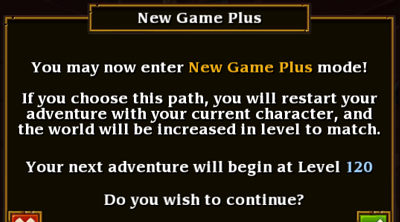 - Monsters' level will increase according to your current level.
- Same main quests and side quests.
- Maps and dungeons are still randomized to enjoy the game with great replayability.
- After completing NG+, you can still continue and restart the game again. A new "+" will
be added to your character profile (NG++) and so on.