✔ Strife D Leingod Published 6:10 PM
Tags
Yu-Gi-Oh BAM Guides
This section will cover the first story line map of the game to help newbies construct their very first decks as they go through the game. Here are some suggestions that players might want to use or follow for their starter decks.
If you still need some help on how to create custom decks, I recommend that you read this simple guide first:
How to Create and Use Customized Decks 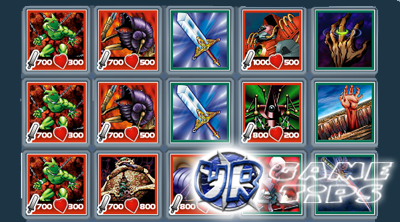 IMPORTANT NOTES:
- Pass all duel nodes and treasure nodes to get all free cards.
- Doesn't cover Crafting, Side Chapters (blue nodes) and Collecting Duel Stars. NEW!
- This guide will focus more on using Coins and Free Cards from duels or treasure nodes.
- Recommended to all players with limited Duel Points.
- Your goal is to get all possible powerful free cards like Mirror Force and White Hole while
earning some Card Points (at least 200 CP) from dueling friends to get key cards at higher Chapters.
- Proceed by treating this guide as another deck of yours.
- This is not the only way to play the game, feel free to do what you think is best. ^^

After Chapter 3
- I suggest to finish the tutorial first before creating your custom deck to avoid game errors.
- Activate your deck and exit the Deck Builder. Enter deck builder again then proceed below.
- Focus on getting monsters with high Power values (Sword icon). Preferably
around 700 Power and above. Refer to the screenshot above for sample monster and spell cards.

- Now, I recommend buying some cheap Spells early on to quickly boost your monsters.
- You will need some Card Points but don't worry, you already have enough free CPs.
- Go to SHOP: Filters > ALL > Spells > Card Pieces
- Buy 1 Sword of Dark Destruction (2 CP)
- Buy 2 Kunai with Chain (2 CP)

- Slowly replace 700 Power monsters with 800 and above Power monsters as you progress
through the game. You don't need to buy any cards, just use the rewards from duels and treasure nodes. Next, get the below Monster cards (with effects) from rewards.

- This is how your deck should look like after finishing Chapter 10 Node. 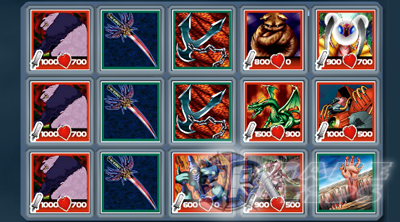 - If you received any of the cards above, add them to your deck.
- Monster effects like "Boost All" and "Cripple All" can really help you win duels.

At this point of the game, you should also have around 100,000 Coins by selling cards and
from rewards. Sell all monster cards (no effects) with less than 501 Power. Conserve your Coins and Card Points for stronger cards at mid and late game! (earn about 200,000 Coins).

Chapter 13: Nasty "Shared Fate" Monsters! (Needs a Little Luck)
At Chapter 13, you'll encounter some decks with "Shared Fate" monster cards! Your current
deck will do just fine, but if you are having a hard time, try these tips.

Chapter 15: Seto's Dragon Deck! (Needs some Luck)
- At the near end of the Chapter, you'll encounter a "Boost" Dragon Deck.
- Now, I recommend to start buying cards with good Life Points and with Anti-Spell effect.
- Sell all monster cards (no effects) with less than 1000 Power. You should have around
200,000 Coins by now.
- Go to SHOP: Filters > ALL > Destroy > Coins
- Buy 1 Suijin
- Buy 2 Sectarian of Secrets 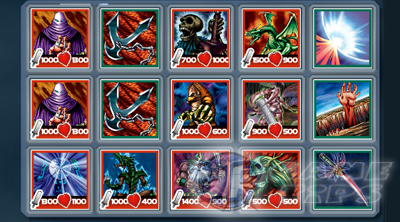 - Place your "Shared Fate" monster cards or Fissure/Mirror Force on the field and hope to
destroy those powerful dragons, specially "Wicked Dragon with the Ersatz Head". Do not boost your "Shared Fate" cards, just let your opponent kill them!
- Your aim is to set and build up your monster's Power before your enemy does to win.

- White Hole spells will be one of your problems but if you have powered up your monsters,
you'll survive. "Destroy" cards can't destroy "White Hole" cards but they can destroy other spells. With some luck you'll complete this Chapter.

Chapter 17: Nasty Cripples and Requiems! (Needs some Luck)
- Replace all Spells except "Fissure"/"Mirror Force" with "Dokuriozo the Grim Reaper",
"Three-Legged Zombies" and "That Witch Feeds on Life".
- You should be close to around 10,000 Life Points for better survivability. 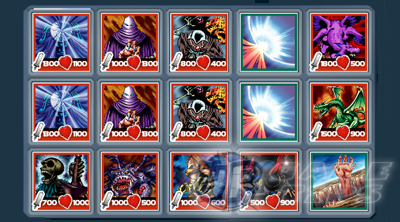 Chapter 22
- Honestly, from here on, Boss battles will get a little harder because you will start to
encounter over 2000 Power monsters!

- It is still very possible to complete story mode by using this guide's custom deck, but it
will require some strategies and some Card Points to buy key cards for defeating bosses. Save about 200 CPs for the last Chapter. If you need more friends, comment with "Add Me" here at urgametips.com.

Chapter 23
- Here you can also get another cool dragon cards, the "Curse of Dragon" and "Yamadron".
- Both are good but let it go for now. You need to keep the balance and "Backfires".

Yugi's Powerful Dragon Deck! (Needs some Luck)
- The last Boss node here will fight you with his Dragon Deck with Raigekis and more!
- Replace "Sky Dragon" card with "Wood Remains".
- Replace the 2 "That Witch Feeds on Life" with "Ansatsu" and "Dokuriozo the Grim Reaper".

- Your Spell cards (hope to draw them asap), "Shared Fate", "Sneak" and "Requiem" cards
will take care of those dragons, and your Spellcasters will destroy those Raigekis and Dragon
Boost cards.
- Just survive and if your lucky, he'll just burn himself with backfires!
- Don't forget to use "Get Help" from friends and some Power-Ups from gifts too.

Chapter 24: Marik's Darkest Deck! (Needs some Luck)
- Decks here will focus on "Cripple", "Requiem" and "Shared Fate" to fight fire with fire!
- Basically, your goal is to have more monster cards than your opponent in the end.
- If you can draw Call of Darkness and Mirror Force asap, you'll get a high chance. 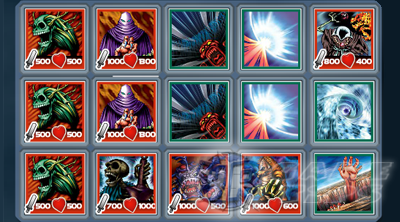 - Since he doesn't have any spell cards, use Mirror Force on the left most channel. If you
placed Mirror Force, do not place any monster cards here.
- Use Fissure on a channel and do not place any monster cards on that same channel.
- As much as possible, do not place "Shared Fate" monster cards below those "King Fogs".
let them "Cripple" your monsters instead to destroy stronger monsters.
- Place "Requiem" cards on the left most channel if possible for better performance.
- Place your "Call of Darkness" cards on the middle or on the right most channel.
- The best chance to use your White Hole card is when you have 3 monsters in the field.
- Use Get Help from friends or Power-Ups if it's a very close game. Good luck!
- In case that both of you end up with zero monsters in the field, use BAM and "Get Help"
until you defeat your enemy. Good luck!

Marik's Dark Fiend Deck! (Needs some Luck)
- The easiest way to win this, is to use "Exile of the Wicked" cards.
- Go to SHOP: Filters > ALL > Spells > Annihilate > Card Points
- Buy 3 "Exile of the Wicked" (30 CP each) spell cards from the Shop and replace your
2 "Call of Darkness" and one "Wood Remains".

- Enter the Boss node and annihilate his top 3 Fiend monsters!
- Place "Mirror Force" and "Exile of the Wicked" in the left most channel.
- Same rule, do not place any monsters if you will use Mirror Force.
- Use your "Shared Fate" or "Requiem" monsters to take out those Air Eaters and Fairies.
- If "Just Desserts" shows up, use "Sectarian of Secrets" or avoid putting 3 monsters.
- Use Get Help from friends or Power-Ups if it's a very close game. Good luck!
- In case that both of you end up with zero monsters in the field, use BAM and "Get Help".
- Claim another "Curse of Dragon" card and proceed to the END node!


Congratulations! Now you are a real BAM Master! ^^
- What to do next? Collect and Build the most powerful deck that you can for future use!
- New maps, new cards and new features will come soon!