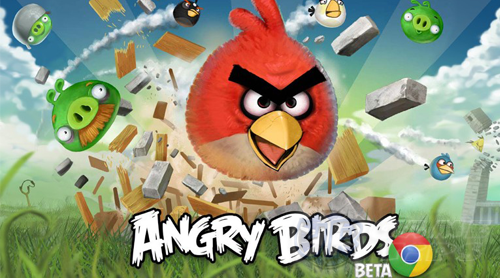 Angry Birds offers a challenging gameplay experience that requires strategy, logic skills
and precision to crush your enemies and obstacles on your way.
The aim of the game is to complete all levels by defeating all the green pigs per stage.
It's not that easy because you will have to break through a physics-based castle to expose your enemies. You have all the time to finish the levels without worrying about energies or any limits because Angry Birds
offers lots of replay value!


- Battle Play -
Angry Birds Chrome is basically an aim and shoot game. Similar to a Bow and Arrow but
this time, the game uses a steady Slingshot as your Bow and Angry Birds as your Arrows!
Defeat those green pigs by hitting them directly or by crushing them down with their
own castle. At later game levels, the game offers a good variety of ways to finish your enemies.