Meteor Hammer IO: How To Play, Attack and Farm - Tips and Guide 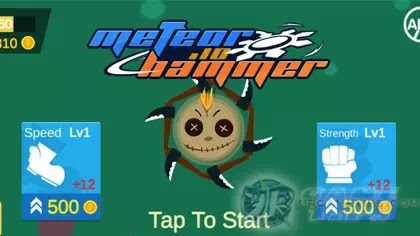 How To Defeat Enemies

- You need to hit their characters to defeat them.
- Hitting their Meteor Hammer will decrease their blades and also your own blades. You can keep attacking them until they run out of blades, but still be careful though if you have lesser blades, and do not expose your character too long.

- Simply tap the Attack button to throw your Meteor Hammer to the direction you are facing. 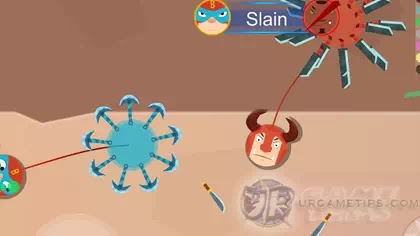 - TIP: Right after throwing your Meteor Hammer, quickly release the movement pad to let your character go inside and defend against possible attacks.

- Simply move your character away from the enemy's direction, this way your Meteor Hammer will attack the target, without using the Attack button. 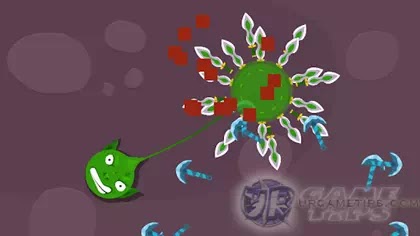 - Hitting an enemy's Meteor Hammer with this attack, will not push your character away. This is also a nice way to attack those that are hiding inside their Meteor Hammer.

- In-case you don't know which direction to go due to multiple enemies for example, just stay inside your Meteor Hammer, or wildly rotate the movement pad and hope that you will hit them before they can hit you.

- Aside from spamming attacks, here's some other ways to do follow up attacks.

- Same as Basic Attacks above, just do the same and release the movement pad after hitting an enemy's Meteor Hammer, this way you'll get another follow up attack sliding towards the enemy while you are inside your Meteor Hammer for a possible kill!

- In case your basic attack missed the target, you can actually move your Meteor Hammer towards the target for a follow up attack (quickly rotate the movement pad after throwing).
- This is sometimes faster than doing another basic attack. 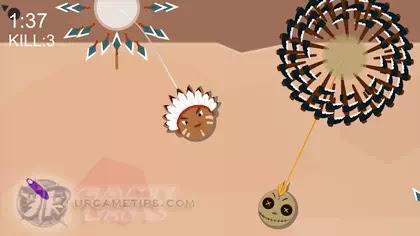 Attack Without Using the Attack Button

- This is a very cool way to chase or approach nearby enemies, check the colored circles near the corners and sides of the map to track your enemies, then move closer to them by just using the movement pad, move which direction you want to go then release to slide while defending.
- You can also do surprise kills with this one lol!

- TIP: This is the best way to attack and defend, especially when you are playing in the 4th map (with those 3 spinning Ball Traps).

- Gathering items will make your Meteor Hammer bigger, and would also increase your "view range" which is very advantageous!
- Right from the start, quickly collect at least 30 items to get a decent view range against your enemies.

- Move your character and drag the Meteor Hammer to collect items.
- Upgrade move speed to move and gather faster.

- You can also use any normal attacks to let your Meteor Hammer collect the items.

- Just rotate your Meteor Hammer as fast as you can to collect all items nearby, even better if you have a larger Meteor Hammer!
- Note: This is the only way get items from unreachable locations.
- Be careful because though this method will make you vulnerable, so make sure there are no enemies nearby that might attack you.

Other Tips and Tricks

How To Farm Fast Gold and EXP?

Do a Death Run!

- Yes, right from the start, just purposely let your character get defeated asap!
- If you encounter any video ads, just skip them using the "back" button of your device.

- Example Map:
- 3rd Map with those huge spinning blades at the center, go to the center right from the start. 10th place will give you 90 Gold and 40 Exp per quick run! 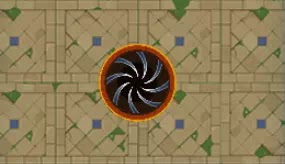 - Find similar maps in-case there are new updates for the game.

- If you don't like doing death runs, then choose a map that would likely defeat enemies for you. 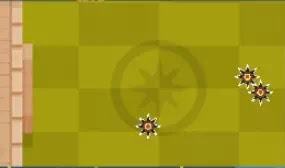 - Your aim here is to attack without using the Attack Button to keep your character safe, no need to collect items (there are lots anyways, just keep moving), and be very aggressive. Check "Attack While Defending" section above to learn how.
- Defeat other players to gain more EXP.
- This is a win-win game, even if you lose early on, the rewards are still ok.

- TIP: Use the brown Scarecrow Character (first character) to disguise yourself like a spinning BallTrap lol!

If You Just Want Gold

- It's optional but this is another way to gain fast Gold.
- Claim the Daily Sign-In rewards for some free Gold.

That's it guys, thank you for checking our How To Play, Attack and Farm - Tips and Guide for the arcade and action mobile game app - Meteor Hammer IO. Available for Android (Google Play) and iOS (App Store).