✔ Strife D Leingod Published 5:49 AM
Tags
Android and iOS Game Apps
GunboundM Tips and Guides
Here's a list of Battle Items, Totems and Cloud effects that might also give you a chance to win your PVP battles, or at least turn the battle to your favor.

Note that the first player who attacks, will get no Totem and Cloud effects until next turn.
Use them wisely, and avoid getting into a dangerous totem's area of effect. Good Luck! ^^ 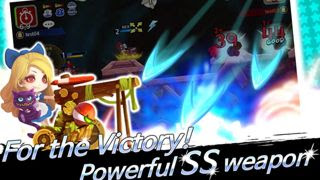 - When the battle starts, the game will randomly generate 3 battle items that both players can use.
- Use them wisely because these items might also help you turn around battles.

- Note: For best results, only use offensive type items if you are certain that it will hit the target. Also, consider the weaknesses of your targets like Mobile Types, and more.

Dual
- Use your current skill attack twice, but loses 30% Damage Power.
- This can greatly increase your damage output, especially when used with SS attacks. Combine with Totems and Cloud effects to achieve maximum damage!

Dual +
- It will use both your 1st and 2nd attack, unless you are going to a SS, so check if they are compatible with your current skill attack.

Vampire
- Increases your current skill's damage power by 10%, and will let you absorb 25% of damage output as Health regen. A nice battle item for increasing attack damages, best with SS attacks for more life steal!

Multi Shot
- Fires a 3-way bombs together with your current skill.
- Accuracy is kinda bad unless your use it with Sky Shots to land all bombs. Sometimes used to clear out little chunks of land hanging around your target, or to eliminate shields before your skill lands. Mostly used to activate more Cloud effects.

Bungee Shot
- Fire a land blasting shot together with your current skill.
- Useful for getting SS charges from Dig Shots, or for bringing your target to fall to the bottom.

First Aid Kit
- Recovers 30% of maximum Health.
- Wisely use to gain advantage, best for high Health Mobiles.
- Example: Avatars with skills that can generate HP when below 20% of maximum Health = if it's HP is around 21%~30% better use this item before it dies from 2 shots.

Shield
- Turn your Shield on to protect your Mobile from 1 attack or multiple fast burst attacks.
- Refer to the example above too.

Teleport
- Allows you to change places, and your Mobile will also get a Shield upon landing.
- Turn will end after using.
- Refer to the example above too.

- Note that the first player who attacks, will get no Totem and Cloud effects until next turn.

Power Up Totem
- Attack power increases when within it's area of effect.

Defense Up Totem
- Defense power (damage reduction) increases when within it's area of effect.

Power and Defense Up Totem
- Attack and Defense power (damage reduction) increases when within it's area of effect.

Defense Down Totem
- Defense power decreases when within it's area of effect.
- Avoid this, unless necessary.

Other Usage of Totems
- Use them to cover your Mobile from enemy attacks.

- Use these clouds to your advantage to deal more damages to your enemy's Mobiles.
- Note that the first player who attacks, will get no Totem and Cloud effects until next turn.

Bungee Clouds
- Increases the blast range of the passing projectile. Useful for getting Dig Shots and Bungee Shots.

Laser Clouds
- Adds laser attacks to all passing projectiles, then shoots lasers to all explosion points from underneath. Useful for blasting out lands and to bungee Mobiles to the bottom.

Hidden Clouds
- Reveals the cloud's true effect once a projectile passes through it.

Dark Clouds
- Reduces the damage of the passing projectile! Avoid unless necessary.
- Can also be used to cover your Mobile from attacks (reduces their damages from above).