✔ Strife D Leingod Published 1:48 AM
Tags
Legacy Quest Guides
Legacy Quest Hero Stats and Skills Build
This Warrior build will focus more on using Dual Wielding or Two-Hand Weapons and Parry to increase survivability. Taking hits really can't be avoided since you are a a melee fighter, but it can be reduced by using "Quick Hit and Runs". How? after your initial attack, move back then do another quick attack, spam repeat until targets are dead.

If you are hitting the enemy with quick hit and runs, without getting any damages, then you are doing it right. Works great against melee enemies, but not for ranged ones. 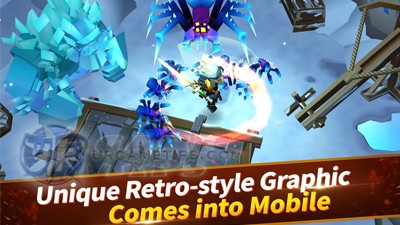 Early Game (Normal and Tough)
- Primary Stats: Health, Armor, Strength and Parry
- Always remember, a higher Lvl gear is always better in terms of base stats (Health, Armor and Str), regardless of their rarity or grade.

- Craft and upgrade 2 one-hand weapons of your choice first using T3 Cubelets, get the other gears by either crafting or from normal stages or Mini-boss stage drops.
- Note: Mini-Bosses and Boss stages have higher chance to drop gears/chests with higher lvl, rarity or grade (Example Land of Demise 3/12).

Mid to Late Game (Hard and Above)
- Primary Stats: Health, Armor, Strength and Parry
- Now start adding in Critical Chance then Critical Damage.
- Also start adding in Life on Hit and Mana on Hit if you find one, 2 great stats with very small bonuses but still helpful when stacked at higher levels (I think they nerfed this though).

How to Farm Gears?
- This is where your farming life begins.
- Unlock Brutal Mode and farm on Land of Demise stages, even if it's just on 1/12. Get T3 Cubelets there and convert them to T4, then craft another 2 one-hand weapons of your choice. 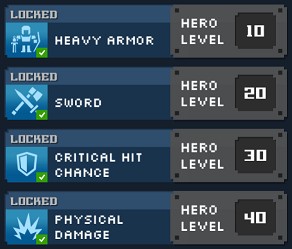 Hero Traits To Get
- Hero Lvl 10: Heavy Armor is more suitable for this build.
- Hero Lvl 20: Sword, Axe, or Mace, your choice. Sword is faster with AoE damage pattern, while Axe and Mace deals higher damages vs single targets with slower attack speed pattern.
- Hero Lvl 30, Any except Mana.
- Hero Lvl 40, Any will do but preferably, go for either Holy or Physical if this is your first hero. Why? because both attributes are under Path of Power (STR+), a talent path suitable for Warriors.

What If My Hero Dies?
- Happens, but only revive up to 3 times using Souls, above that will require 800 Souls then 8000 Souls so better give up. Roll what you can and continue, at least get Sword, Axe, or Mace depending on the weapon/s you have saved or using.

I Want to Use a Two-Hand Weapon, Is It OK?
- Two-Hand Weapons are also viable for this build, the reason why I didn't start with them is because their Parry chance is simply lower than Dual Wielding builds.
- If you really want to use one, it's better to start using them at higher levels where you can get at least 20%+ Parry, if you can find a higher one, the better.
- Also modify the Trait of your Hero to utilize your weapon choice.

Talent Tree - Souls Allocation
- Upgrade All Paths to Lvl 1 to reduce prices.
- Lvl 6 Path of Power then all to Path of Mastery.
- Upgrade any next.

- Fire Trap will be your early AoE skill vs enemy mobs like bats, zombies, and more. Nice casting time, easy to use while moving around enemies.
- Stomp is a very nice early game control skill with 2.5 seconds stun, enough to give your enemies 3 attack combos, just time it well to avoid damages.
- Both skills are very useful for tight places.

Other Notable Skills Early Game:
- Battle Leap is ok as long that you can control it properly, replace Fire Trap above for full control early game, nice versus big sized enemies and boss monsters since they can be pushed with this skill.

- Molten Strikes is the only decent DPS skill for early game, but you may still switch this skill to any skill you would like to test though.
- Blademaster looks vague on paper but this skill is a life saver! This is how it works: Do not get hit for 10 seconds to activate the shield (auto activates upon entering dungeons). While the orb is active, you'll get a +20% chance to parry 2 attacks. A pretty good skill for this build, keep your shield up!
-You can wait or run around to charge your shield before taking on heavy hitting enemies.

Other Notable Skills Early Game:
- Toughness is ok until you get Blademaster.

Mid to Late Game (Hard Mode and Above)
- Note: You can do a lot of combinations from here on, check below for examples, mix and match to find what is suitable for your playing style.

Control Skills:
- If you want full control, Frost Nova (First Time Clear (Stormshriek Castle - Tough) and Stomp are your best choice so far. Nice for surviving tight places, or for taking out those pesky ranged enemies up close.
- Battle Leap has accuracy issues but it's ok to use if you want. Frost Trap and Blizzard doesn't have enough slow effect to be very useful, hopefully they will buff them up in the future.

Other Notable Skills:
- A nicely upgraded Toughness is ok too.