✔ Strife D Leingod Published 9:53 AM
Tags
Android and iOS Game Apps
Crusaders Quest Guides
Guides List - Mobile Games and FAQs
RPG Mobile Games
Crusaders Quest is an epic 16-Bit RPG presented by NHN Entertainment Corp., Collect and command over 200 heroes, time your taps for real-time puzzle battles, and defeat waves of monsters in an epic quest to save the Goddesses before they fall to the power of the Apostles! 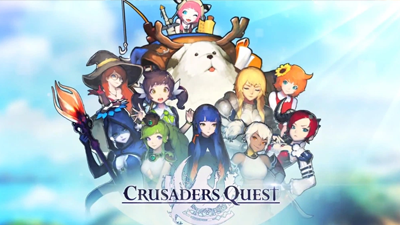 Sorry Gamers, there are no available in-depth guides for this game at the moment.

What are the different types of classes?
- There's a Total of 6 classes, each class type and characteristics are listed below.

- [Class Type and Characteristics]
- Warrior: Expert in close combat, has a strong close combat skill and physical attacks.
- Paladin: With a background in resistance using high level magic, it specializes in disarming enemies and protecting allies.
- Archer: Can attack enemies' rear and is extremely skilled in continuous attacks.
- Hunter: Specializes in attacking one opponent.
- Wizard: Has a variety of function based skills and a strong long range attack.
- Priest: Has variety of skills such as being able to heal allies' staminas that can help during battles.

How can heroes level up?
- Heroes can level up only if they gain experience through all the training levels. After the training has been completed, go to [Manage Heroes > Level up] and use the selected amount of "Honors" to level up.

- Once a hero levels up, its rank is increased by 1.

- From Rank 1 - 3, when the heroes level up, they will stay within the same class but level up to a random hero appearance a rank level higher. From Rank 4 to Rank 6, the hired hero's class can change as well and they can become a completely different class than they were before.

Where do I get a hero?
- Heroes can be acquired through contracts at the store, clearing a stage, levelling up, and through quests. Also, heroes can be purchased with gold through nomadic merchants.

How do I use the skills?
- Skills can be used by pressing the skills blocks. If you collect the same skills and use them at the same time, a much stronger skill is activated.
- You must collect up to 3 skill blocks in order to use them all at once.

What's passive?
- All heroes who are ranked 4th or higher are given the "passive" effect.
- There are two types of passive effects: "Main Force" and "Assistive Force"

- It is difficult to activate the main force passive. The assistive force is easy to activate and is effective in overcoming the weaknesses when using 1-chain.

- Goddess skill gage can be recharged by using the skill blocks. The more you collect and use the faster it recharges the gage.

What is an "Honor" and how do I acquire and when do I use it?
- Honors are used to level up and learning skills.
- Can be collected by selling heroes, and receiving rewards from the quest or battle rooms.
- Can send and receive honors to and from friends once a day.

What is the Battle Room?
- A dungeon where you can fight a different opponent and must continue to fight until one side loses.
- You will need the PvP ticket in order to fight.
Within one hour of using this ticket, if you win 10 times in a row, you can fight for an infinite amount of times.

- If you win, you can win league points, honors, meat, and etc.

What is the World Boss?
- Can enter the raid contents after clearing 24 stages in the desert scenario.
- After spending the required amount of meat, you can enter and acquire higher ranked weapons

What is the dungeon key?
- It is a good needed to enter the ancient dungeon.
- Once used, it recharges 1key every 20 minutes
- You can also purchase it using gold from the nomadic merchant.

What is a ticket?
- The tickets are needed to enter the Battle Room.
- Once you use a ticket, you can use the Battle Room for an unlimited amount for 1 hour.

What is a meat?
- It is a good needed to enter a scenario.
- It recharges 1 meat every 10 minutes, and are used up by the requested amount at each stage.
- Meat can be acquired through a PvP win, or immediately acquire them by purchasing a certian amount of meat using gems.

What is the Ancient Dungeon?
- The Ancient Dungeon is a special dungeon that can only be entered after clearing the 1st Desert Scenario Stage. Unlike the scenario, you must use the 'Dungeon Key' in order to enter.

- Compared to the regular dungeons, you can acquire a lot more variety of items in the ancient dungeons, and can test your abilities as you increase the level.

- In the Ancient Dungeon, the dungeons allowed to enter may change depending on the time.

- The probability of success is the sum of the bread used during training, and the closer it is to 100%, the higher the success rate.

*Source: Full Credits and Thanks to TOAST.com FAQ for the Official FAQs.