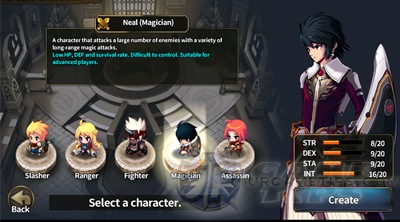 - Evasion: Mid game is somewhat rough for Magicians so getting this around 40% will also help dodge some attacks. (Evasion+%, DEX+).
- CRIT DMG: just get what you can for now, make sure to cover CRIT RATE first before increasing.
- MP: Use the bonus from INT.
- Accuracy: 120+ to 130+ should be fine.

CRIT Build Lvl 35 to 60
- Unlock Hero Mode First. Note that monsters from here on are stronger than before so it is normal to grind if you get stuck.
- Reminder: Upgrade your gears (especially weapon), battle pets (summon for boss fights), fairies, increase awakening stars, and upgrade some Seals.

- DEF: Just upgrade your gears to get the DEF bonuses. Your "DEF Increase" passive skill will start to give great bonuses at this point too. Aim for at least 1600+ DEF for Chapter 9 Hero Mode (Stamina+, DEF+).
- Accuracy: Only increase if you miss a lot in PvE, or increase to around 200+ to 250+ for PVP purposes (Accuracy+, DEX+, Stamina+). If you are a PVP enthusiast, you need to increase this more, unless the meta changes and everyone drops their Evasion.
- Evasion: This depends on personal preference, if you like it, just cap it to at least 50% to 100% (Evasion+%, DEX+), increase if you need more at higher levels.
- MP: Just use the bonus from INT.

- Don't forget to upgrade some of your SEALS too.

- If you reached this point, you probably know now what you are doing. 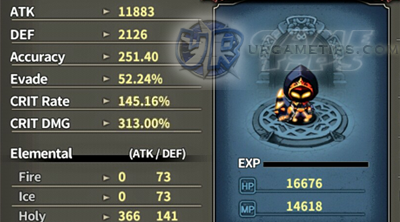 - Note: Stats are not fully optimized, there is still room for improvement. Increase stats according to your needs as you go higher.

Other Stats
- Skill Cooldown -%: This is a very interesting stat to add, especially that you can get around -30% at Lvl 45+.
- MP Use -%: Situational Stat, might be useful for other areas like Monster Wave. If you don't want to mess with your perfect gears, just get it on a substitute gear.

Important Note!   - Due to the new revamped skills update, the skill build below is not 100% working. I will update this guide once they release the final patch notes of the revamped Skills and Stats.

By default, skill sets below are focused for PVE or leveling purposes. Note that this is not the only way to build your skills! There are so many skill builds around that is also viable.

*After the v1.0.8 update patch, you can start farming Soul Stones from the Fairy Tower at Lvl 10. It's way easier now, so Awaken your character as fast as possible. Enhance your Fairies also with Fairy Dusts and evolve to get more stats!

- The bonuses of the 2 passive skills above isn't great early game but it will be very helpful as you go higher. Some players doesn't like DEF Increase, but I highly recommend it for survivability until mid or late game.

- Chapter 4 (White Turrets): To beat them easily, place your Mage on their lower left or upper right quadrant, then snipe them using normal attacks. 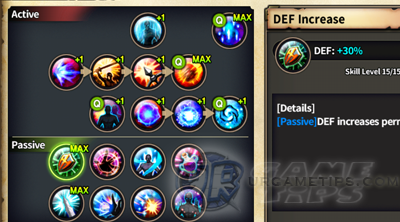 - Combo Step 1: Gather mobs > Move or Dash away a little > Face Mobs > Force Circle (you need a space for Force Circle, using it right in-front of strong mobs isn't safe)
- Combo Step 2: While inside your Circle, quickly throw Meteor and Magic Shot (Tap once to face mobs if your character is facing the wrong direction).
- Combo Step 3: Dash inside your Meteor and cast Blizzard!

- Combo Step 1: Dash near the monsters > Quick cast Clone > Move to a better place while invisible for 2 seconds > Force Circle
- Combo Step 2: Monsters will come to you > Cast Meteor > Dash inside > Blizzard.

- Combo Step 1: Cast Force Circle right away > Meteor > Dash towards the Boss > Blizzard
- Combo Step 2: While Blizzard is active, keep tapping Clone Explosion > Dash away once it activates. This is also a good time to summon a friend if you have.
- Combo Step 3: Dash around the map, avoid monster attacks, and wait for your Skill Cool-downs, then repeat.

Thunder Shield + Spell Amplified + Force Circle
- Works great for PVP, try and experiment with them. Paired with Reflect+% Stat from weapon and/or amulet, you can dish out more damages back to the enemy!

Lvl 50 and Above
- Passive Master = MAX next (increases the base bonus stat of all passive skills, a nice skill at higher levels). Reserve or put Skill Points here, and wait until it is fixed.

- From here on, either follow the other optional passive skills below, or increase the active skill you like. Thunder Shield is great for PVP, if you want to increase you may do so (this is optional).

- Note: Passive Master and Discipline are NOT working (at the moment, stats doesn't increase at certain Lvls after Lvl 1). Just put 1 point each for now until they fix it.

- Optional: If you don't like the DEF Increase at this point, you can use Reset and re-allocate the points to Passive Master, Magic Shot (has the highest single target output), or other Skills you like.

The End Game
- Once you are done with the story line and all available modes, it's time to reach the Max Lvl.
- Continue or reconfigure your skills for Auto-Battle Grinding, then reset again if you want for PVP builds last. Experiment and have fun!

Reminder
- Playing any Glass Cannon Types will require you to learn how to do hit and runs, and to use attacks, skills, or dodge after triggering the attack animations of monsters.

*Due to the v1.0.8 update patch, Raid Set Gears are no longer available for new players. For now, use what you need from the available sets dropped from Dungeons, we will update this soon...

So far the popular choice is Destroyer Set.

- Upgrade your weapons to higher Lvl and Grades, start aiming for SS weapons once you reach the Hashina Set at Lvl 30+. Weapons can be set or no-set depends on the availability of in-game items.

- Hashina Set = Upgrade to Grade SS, use until Lvl 49. Start aiming for gears with +1 Gem Slot to get more stat bonuses.

Note that this is not the only way, just a suggestion.