✔ Strife D Leingod Published 2:13 PM
Tags
ZENONIA S Guides
Fairies are your little companions in your ZENONIA adventures, they can give extra stat bonuses, active buffs, and more. To learn which Fairy is the best for your playing-style, refer below for more info. 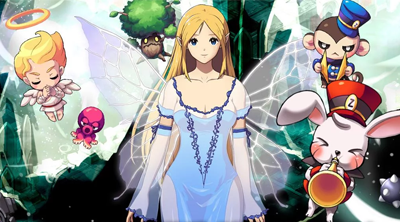 How To Get More Fairies?
- The best way is to farm them from the Arena:
- Arena Victory Rewards will randomly drop Grade D Fairy Coupons.
- Arena V Pts Ranking Rewards will give Rank D to S Fairy Coupons, depending on your rank after the season ends (1 week).

- Fairy Coupons can also be obtained from various mission rewards, or can be purchased from the Shop using ZEN (optional).

How To Evolve Fairies?

Enhance
- You can evolve a fairy by enhancing them, and evolution will take place every after 10 levels.
- Use other unused fairies to enhance your main fairy, or save them for the Evolution process.
- Main gears and accessories can also be used but will only generate smaller percentage, use it only at lower Grades if you want.
- Your best choice is to Enhance them by using Fairy Dusts, farm them the Fairy Tower.

Evolution
- Once you reach the next milestone, the Evolution button will be active.
- Use other fairies to evolve them, aim for 85% to 100% chance.
- Note: If you have a Lvl 1 Grade A Fairy, the next evolution will take place at Lvl 40.

- Existing stats will also increase after evolving.
- Note: If you have a Lvl 1 Grade A Fairy, stats will increase at Lvl 11, 21, and 31.
- Remember though, that it is best to choose a fairy with a nice overall stat bonuses, over their Grade Lvls. 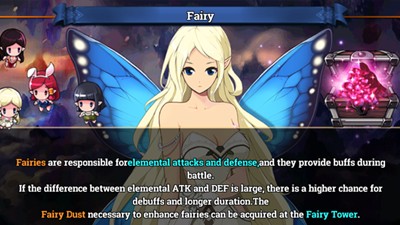 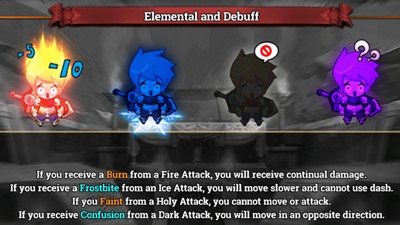 - Fire Fairy
- Skill: Inflicts Burn Effect to a target, dealing DoT burn damages.
- Target turns to color red.
- Can be a nice fairy for characters with high damages, proc-rate is high too, but not so popular at the moment.

- Ice Fairy
- Skill: Slows down a target, also disables dash.
- Target turns to color blue.
- Also a nice alternative fairy for ranged characters, and the proc-rate is high too.

- Holy Fairy
- Skill: Stuns a target for a few seconds, unable to use skills or move.
- Target turns to a dark color.
- Popular fairy, especially for PVP.

- Dark Fairy
- Skill: Inflicts a Confuse Effect to a target, inverting all controls.
- Target turns to a purple color.
- Can be an alternative to Holy Fairy. Popular fairy for PvE with better proc rate than Holy Fairy.


Grade and Lvl of Fairy Affects EXP Gain
- You can see this tip from the loading screens before, but some of my friends said that it is no longer working. They tested it by transferring their Grade S fairy to a low Lvl character, the EXP gained was the same.