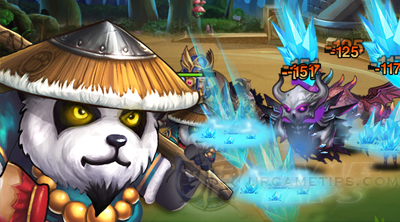 Chemist
- Coming Soon! Share if you have info, thanks! ^^

Cloud Walker
- Phantom Stab: Wu Kong summons a phantom of himself and damages enemies ahead of him with multiple stabs.
- Doppelganger: Wu Kong summons two of his doppelgangers to fight for him.
- Frost Lance: Wu Kong throws a frost lance at a target, causing physical damage to it and slowing it down. A phantom is also created attacking the target.
- Phantom Boost: Wu Kong increases the HP of his phantoms and his own.

Corrupted Angel
- Dark Territory: Terrence reduces enemies' attack accuracy and deals magic damage to them.
- Life Sacrifice: Terrence sacrifices his own HP to increase the whole team's physical attack damage for a period of time.
- Souls Exchange: Terrence restores his own HP to the max, at the cost of some HP for a random ally. The ally will not die from this skill.
- Rebirth: When Terrence's HP reaches zero, he steals allies' HP and restores his own so that he can continue to fight for a period of time (He dies when the time is over or when his HP reaches zero again.).

Death Mage
- Summon Wraiths: Rasha calls forth a group of angry wraiths to cause magic damage and steal the life force of her enemies for her.
- Swarm of Bats: Rasha summons a swarm of bats and deals magic damage to enemies in front of her.
- Silence: Rasha silences a wide area of enemies and disables their spells casting.
- Sinister Aspect: Rasha embraces her diabolical nature, increasing her own magic power.


Desert Lycan
- Auncel: Bane summons an auncel and deals damage to the enemy of most HP. The amount of damage is based on the missing HP of Bane.
- Holy Snake: Bane releases a holy snake to attack the enemies nearby, dealing physical damage.
Holy Snake’s level is X.
- Finger of Death: Bane deals magic damage to the enemy of least HP. If the enemy dies, Bane deals bonus damage next time he casts this skill.
- God of Desert: Bane increases his max HP by the force of the Desert God.

Emberstar
- Emberstorm: Eva calls down elemental magic to damage one of her enemies.
- The Crucible: Eva summons a blast of flames, causing magic damage to enemies in a wide range before her.
- Caldera of Ash: A circle of flames rises around a random enemy, causing magic damage and stunning the target.
- Phoenix Feather: Eva's mastery of ember increases her energy every time she attacks.

Ferryman
- Tortured Spirit: Shalandar releases hungry ghosts that deal magic damage over a broad area. This skill will also be triggered automatically upon Shalandar's death.
- Shades: A vengeful shade deals magic damage over small, moderate and ranged areas.
- Mastery of Death: Ferryman increases his attack damage every time a Hero dies. The effect of Skill Shades will also be increased.
- Haunting of Dark Lord: Ferryman terrifies all enemies nearby and greatly reduces their attack damage.

Frost Mage
- Ice Halo: A ring of icy frost is brought to bear against Helga's targets, it bounces between them, dealing additional magic damage.
- Force Blast: A target zone is struck with a powerful blast of supercooled air, causing magic damage over a small area.
- Bag of Holding: Helga summons frost armor for her weakest ally, enhancing their armor for a period of time.
- Terrible Presence: Helga terrifies all her enemies, reducing their magic resistance.

Hidden Needle
- Insidious: Quimulan assassinates a target with holy damage and deals splash damage near the target.
- Refraction: Each time Quimulan kills an enemy, she gains 5 refraction charges, each of which absorbs one incoming attack and recovers 80 energy. The refraction also blocks all control skills.
- Psionic Magic: Quimulan creates a psionic trap on ground and controls enemies within to disable them from moving, dodging and attacking.
- Spectral Blade: Using her psionic powers, Quimulan deals holy damage to her target and causes enemies behind the target to feel the same pain as the target itself.

Ice Mage
- Hunting the Maiden: A powerful elemental storm comes down causing widespread magic damage over time.
- Cocoon of Ice: Artonia freezes a target in place, causing magic damage and stunning them.
- Ice Prison: A blast of ice slows enemies within an area and deals magic damage.
- Sigil of Arctus: Using this ancient ward, Artonia and her allies slowly recover their energy.

Imperial Executioner
- Smite: A blaze of energy strikes a target, dealing massive magical damage.
- Thorn: Lodot summons a thorn that knocks the victim into the sky, dealing a small amount collateral magic damage.
- Power Strike: A powerful magic against a single target and turns it into an animal.
- Uncanny Edge: Lodot makes a pact with demonic forces to increase his Magic Crit.

Lightning Master
- Lightning Bolt: A rolling thunder causes magic damage to all enemies.
- Conductivity: DeTheta uses his magic lightning power to beat many of his foes at once.
- Overload: DeTheta selects a single target, striking them with a lightning bolt for massive damage.
- Electrostatic Field: DeTheta's power increases, giving him a bonus to magic power.

Lunar Guardian
- Lunar Barrage: Summons the power of Boaz, striking random enemies with beams of powerful lunar energy and dealing magic damage.
- Lunar Judgment: Summons the power of Jachin, striking a target with lunar rays and dealing magic damage.
- Moonblade: Loreth throws a lunar blade that bounces around between enemies and causes more physical damage, losing a small amount of power with each bounce.
- Chosen of Boaz: Loreth grants the lunar blessing on her allies, increasing their physical attack damage.

Machinist
- Overcharge: Lirune over-charges his weaponry capacitors, causing his machine to unleash a barrage of attacks and deal AoE damage.
- Charged Shot: Lirune fires a magical beam weapon to damage and blind his target and reduce target's physical attack accuracy.
- Seeker: A missile that seeks out a random target and explodes, dealing magic damage over a small radius.
- The Red Button: Lirune presses the red button, greatly increasing his attack and casting speed.

Master Mage
- Sunsphere: Fiera releases powerful magics among her foes, damaging those who rely on their strength and agility.
- Fireball: Fiera attacks a foe with a ball of raw magical energy and deals massive magic damage.
- Black Mark: Fiera chooses a random enemy to exile from the battle for a period of time.
- Third Eye: Fiera pulls energy out of space, expanding her intellect.

Necromancer
- Vampiric Strike: Salar locks and steals the target's HP.
- Kreln Shout: A powerful attack of soul-energy, causing magic damage over a moderate area.
- Exile: Salar exiles an enemy and make him unable to deal or take physical damage. But the target will get extra damage from magic and spells.
- Sacrid Sigil: Salar uses a mystic sigil which resists enemy magic and increases the magic resistance of all allies.


Nymph of Sea
- Water Bubble: Selith traps a random enemy in a water bubble and causes him to lose HP over time, during which the enemy cannot cast any skills.
- Energy Flare: Selith throws a water ball to a random enemy and deals magic damage. If the enemy cast ultimate skill, the water ball explodes and causes extra damage to him.
- Enchanted Wave: Selith summons an enchanted wave and knocks enemies into the air, dealing magic damage and reducing their magic resistance.
- Life Drain: Selith regenerates her HP while dealing magic damage.

Phoenix
- Sun Burn: Isarus expels a huge beam of fire at the cost of his own HP, causing magic damage to enemies in front of him.
- Supernova: When HP reaches zero, Isarus transforms into a burning ball that can be attacked by enemies. If it is destroyed within 5 seconds Isarus dies as well. However, if it survives for 5 seconds all enemies in range will be stunned and the phoenix will revive fully regenerated. (Isarus can revive 3 times in each battle and the ball can be destoryed after 4/3/2 attacks).
- Isarus Charge: Isarus charges forward and deals magic damage to enemies ahead of him.
- Flaming Bird: Isarus summons 4 flamming birds around him, increasing his attack damage and causing splash magic damage for 12 seconds.

Rose Fencer
- Coming Soon! Share if you have info, thanks! ^^

Scorpion Queen
- Telson Strike: Alisa strike the nearest enemy with her telson, dealing magic damage and stunning him. If the enemy dies, it will cause extra AoE damage.
- Toxic Smog: Alisa curls up and releases toxic smog, dealing AoE magic damage to nearby enemies, during which she receives reduced physical damage.
- Venom: Each time Alisa receives a certain amount of damage, she spits out venom to slow down nearby enemies and dealing magic damage to them.
- Resistant Skin: Alisa’s body is covered with poison, granting increased resistance to magic damage.

Shadow Shaman
- Dark Benefactor: Shadow Shaman sends a wave of shadow that cures allies.
- Shadow Curse: Ara'ak reaches through the shadow void to poison an enemy.
- Vayne's Blessing: Defends whichever ally has the lowest HP from death for a period of time.
- Weave: Ara'ak fracture reality, bleeding into the shadow void, reducing the armor of all enemies.

Vengeance Spirit
- Petrify: Nasira petrifies a group of enemies over a moderate area and deals magic damage.
- Split Arrow: Nasira delivers physical damage to 4 enemies but reduces half of the original damage. (The higher the skill level, the less damage it reduces from the original damage.)
- Theft of Essence: Nasira summons a snake and steals energy from many enemies, increasing her own.
- Anti-Mage Shield: A magical barrier that increases Nasira's HP.

Wandering Spearman
- Blood Pact: Kogo attacks with reckless charging, consuming his own HP and increasing his speed and attack power.
- Sacrifice: Kogo enchants his spear with his own blood, causing a damage over time effect on the next target he strikes.
- Gift: Kogo uses a sympathetic magic to heal the weakest ally and regenerate life for a period of time.
- Spell Resistance: Kogo's patron spirits protect him and give him massive magic resistance.