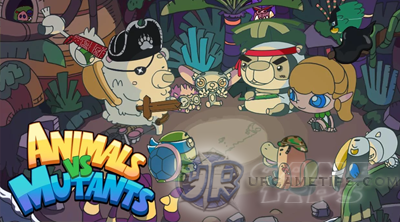 - This will buy you some time to summon your offensive-oriented animal friends. Be sure to check out the level's terrain before entering a match to determine which defensive-oriented you should bring to battle.

- Survival mode is not for the faint of heart. You'll want to make sure you and your friends are at least level 5~10. The key to Survival Mode is to constantly summon the proper animal pals to keep up against the waves of mutants.
- The more rounds you win, the higher your survival rank.

Choose Your Mount Wisely!
- It can mean the difference between winning and losing. Choosing the right mount is important for battle. Some stages require mounts with better defensive or offensive capabilities based on the terrain. Try using different mounts based on your play style to clear each level.

Choose and Execute Your Animal Summons Wisely for Each Level!
- Make sure to summon animals not only based on your current situation and location, but where you expect Jamie to be within the next 10~20 seconds.
- Keep in mind that it does take time for your animal summons to travel to your current position.
- Timely and strategic animal summons takes practice, but greatly rewards those who master it.

Increase Your Mana Recovery Speed Rate to Summon Animals More Often!
- Upgrade your base's mana recovery speed in the early stages of the game to summon animals more frequently.
- This will help your respond to any immediate threats to your strategy and you won't have to worry about running out of mana when you need it most.

Daily Mission Bingo Game
- The Daily Mission Bongo Game is an opportunity for players to earn in-game rewards by completing multiple tasks on the bingo board. Form a straight line and receive extra coins, gems, and spell charges.
- Everyday brings a new set of rewards so be sure to complete missions on a daily basis.

Managing Strawberries Usage
- Strawberries are used up every time you wish to enter or retry a level. Be sure to follow the game's suggestion for recommended animals on that level to make the most our of your strawberry. If you have to use a strawberry on a retry, make sure you're on the verge of winning the round.

*Source: Credits and Thanks to Animals vs. Mutants Facebook Fan Page 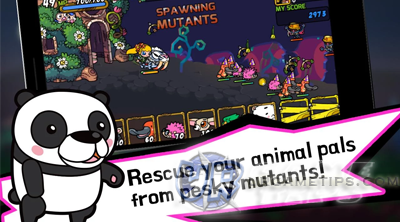 What Does the Scorpion Say?
- This mutant throws projectiles from a distance and can attack both ground and air targets. Its function is essentially the same as the Monkey with the exception of its ability to attack air (it doesn't specifically attack air targets but its projectile can reach flying targets).

- They can inflict heavy damage in large numbers so it is best to deal with them as soon as possible. If they are moving uphill Pandas can be a good choice in fighting them as their rolling attack will make short work of this mutant and will allow them to dodge the incoming projectile.

What Does the Rat Say?
- This mutant has a short range melee attack and cannot engage flying targets. They are best dealt with using the Panda if they are moving uphill or the Monkey which can attack them from a distance.
- In later levels the Desert Fox and the Hedgehog are also good picks against this mutant due to their ranged attack.

What Does the Shoebill Say?   - The Shoebill mutant devours flying targets and has a high amount of hit points especially the larger variety. It is best to either engage this mutant with large numbers of Snowy Owl or Desert Fox which can attack the air to prevent them from being devoured.

- Much like the Pelican upon devouring a target this mutant becomes temporarily stationary and will be vulnerable to attack.

What Does the Crow Say?
- The crow Mutant is capable of attacking both air and ground targets with a dive attack. This function is essentially the same as the Toucan. Similarly in larger numbers these mutants can inflict severe damage to both ground and air targets. They have a moderate amount of hit points and can be dealt with using the Snowy Owl and Toucan.

- While the Pelican can also be a good choice against one or two they won't be effective against larger numbers as they are slow and vulnerable after devouring one.

What Does the Crocodile Say?
- The crocodile mutant has a ranged attack and will deploy a shield that dramatically increases its defense when going uphill. This function is the same with the Turtle and similarly while the shield is deployed the mutant will not attack however it will also not stop and will continue moving forward until destroyed.

- While not dangerous by itself its shield makes it possible for other mutants to get close so it is best to deal with them promptly. The Monkey is an excellent choice in countering this mutant as it will attack with two projectiles on a downhill until it destroys the shield.

What Does the Boar Say?
- The Boar Mutant fills the same function as the Panda. With a moderately high amount of hp it engages targets with a melee attack on flat surface and while going uphill and will roll into a ball that will repeatedly slam into its targets when going downhill.

- If you are going uphill it's best to stop them with the Turtle's shield ability while long range animals such as the Squirrel (which has a ranged acorn attack when going uphill) or the Desert fox attack them.

What Does the Toad Say?
- The Toad mutant can bombard an area from a fairly long range using a volley of projectiles which can also hit air targets. This allows it to attack a few number of animals at the same time. Their weakness is that their bombardment cannot hit a unit in melee range on flat surface and they will be limited to a single homing projectile when going uphill or downhill.

- Be wary when your character is in their line of fire as their bombardment can inflict heavy damage.

What Does the Bat Say?
- The Bat mutant fills a similar function to Snow Owl; it has a long range attack and can inflict more damage in numbers. However there is a difference between the two; the Bat Mutant is able to attack both air and ground targets. It can be dealt with using multiple Snowy Owls or the Desert Fox which can attack airborne targets twice as fast.

How Can I Play with my Friends?
- You must first log into your Facebook account to do this.
- After logging in, you can have a battle with your friends or help each other finish a stage.

Where Can I See My User ID?
- In the Home page, tap the second button from the lower left of the screen.
- The Setting pages will appear and you can see your User ID on the upper right side of the window.

How to Play the Game Without Lag?
- You can lower the Graphic settings at the Settings Menu.

What is the Difference Between Rare Items and Unique Items?
- You can get greater bonus attributes when equipping Unique items.

What is Team Stage?
- The 15th and 19th stages of World 2-5 are called the Team Stages. They are named the Team Stage due to the fact that you will need the aid of your friends to beat them. The enemy base in Team Stage has an enormous amount of HP and summons stronger mutants compared to normal stages.

- The damage you inflict to the enemy base is accumulative in the Team Stage, meaning that if you fail to destroy the base in your first try the remaining HP of the base is carried over to your friends' progress and they will be able to pick up where you left off or vice versa where you can attack an already damaged base from your friend's progress.

- Team Stages have their own unique rewards so be sure to beat them when you can! Team Stages are optional and can be skipped over.

*FAQ Source: Credits and Thanks to Netmarble Games for the Official FAQ! ^^

Hello Fellow Gamer! ^^
If you have discovered an awesome 3 Kingdoms and Poker tip, trick, or strategy, feel free to share them here too by using the comment section below this guide, thanks for helping other players!
Same if you need help or have questions about the game.