✔ Strife D Leingod Published 8:16 PM
Tags
Defenders and Dragons Guides
Here's a game guide that will show which recommended upgrades that players should take first early game, in the action and arcade defense game - Defenders & Dragons. This guide will prioritize Peasants as your main attackers and tankers, while slowly upgrading permanent attackers and useful abilities.

Note: Glu Credits is for Google Play users, and Gems for App Store users, both have the same function. Follow the list below in-order as you progress through the game. 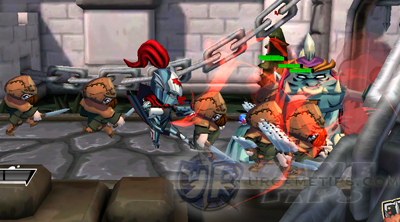 Allies: Peasant Lvl 5
- Quickly build up your Peasants to increase their Health and Attack Damages!
- Use your Glu Credits or Gems here first, see Glu/Gem section below.

- Why Peasants? here's some pros and cons:
- Spammable! coz of their low cool-down (2 sec) and Leadership Cost (5 points).
- Can stun lock tough enemies when swarmed!
- Great overall damage dealers and tankers since you can summon them non-stop!
- No need to worry those fast moving creatures cause you have lots of Peasants running forward!
- No need to worry about your enemy's abilities like Balewyrm's eating thing, just let em eat, you have lots anyways.
- Can quickly block the enemy entrance, might need higher Lvl Peasants though.

- Cons: Can't attack flying enemies but there are so many ways to compensate this.

Heroes (All Heroes): Battle Bell Lvl 1
- Permanent ally and weapon that can damage and stun all enemies!

Heroes (All Heroes): Summon Tornado Lvl 3
- Use against flying creatures or heavily grouped enemies. It can also slow enemies while this skill is actively hitting them. Combo with Lethargy to massively slow down enemies and to let your Peasants hit more!

Heroes (All Heroes): Lethargy Lvl 3
- You main disabling or stalling ability, use to help boost your Leadership Lvl at the start of the battle and to support your attacking front line Peasants to survive!

Heroes (Ranger): Flash Bomb Lvl 5
- At Lvl 5, you'll get 7 seconds of stun! So if you want to use the Ranger, her Flash Bomb ability is a good choice too. Use it to let your allies swarm your enemies and hit more.

Heroes (All Heroes): Reinforcements Lvl 3
- A nice combo for Flash Bomb to instantly swarm enemies with Peasants! Make sure that you only have Peasants equipped and no flyers on that wave though.
- Great for defeating Healers at the back, just sneak then cast!

At this point, any upgrades that you think next is ok, since you have all the base upgrades anyway. If you are still unsure what to upgrade next, follow the suggestions below:

Seals Lvl 4
- This is actually optional, put points if enemies can still reach the Seal.

Heroes (All Heroes): Bridge Guardians Lvl 3
- Knock back enemies at melee range for 20% chance that the Guardians will carry them away. The reason why I did not include this upgrade above is because, most of the time you'll be staying behind your allies for support, you can only do safe knock backs at the start of the battle, it's risky against ranged mobs, not all enemies can be knocked backed, and it is based on luck. Still good, but not good enough to get early game.

After the upgrades above, upgrade all Coin based upgrades, at this points of the game Coins is not a problem. Just use Peasants though even if you have upgraded other Allies. 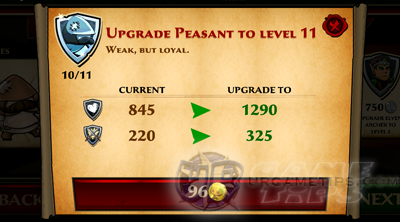 - Tips on how to get more free Glu Credits: Click Here To View Guide!

Allies: Peasant Lvl 11
- Max this one first! Although they have lower Health and Damages compared to other Allies with the same Lvl, Peasants can swarm and can be summoned non-stop!

Heroes (All Heroes): Masterful Skill Lvl 1
- An optional upgrade that adds an extra ability slot to your Heroes.
- Now you can carry 3 abilities per battle for more combos!
- Summon Tornado + Lethargy then Flash Bomb = will give at least 14 seconds of massive slow and stun! If you have 10 maxed Peasants hitting a tough enemy, that's at least 45k of damage in 14 seconds without taking any major damages!
- Summon Tornado, with Reinforcements + Flash Bomb combo = is an all around Powerhouse vs all types of enemies!

Upgrade Abilities
- Others prefer Summon Tornado, Lethargy or Troop Trample first, it's up to you which one you think you'll use the most. For me, I'll go for Summon Tornado first because it has good cool-down, decent damage but great against mobbed enemies, great support for my Peasants since they can't hit flying enemies, and it has a slow effect on enemies (combo with Lethargy).
- Troop Trample is also a 1 hit wonder, great damage but has long cool-down.
- Lethargy: 7 seconds is enough for me, but you may put more if you want.
- For heavy Ranger users, Flash Bomb is also ok if you have lots of credits.

Any Upgrades that You Like!
- Next, just upgrade what you think is best for your gameplay, Good luck! ^^,