Zombie World War: How To Get More Coins - Farming Stages

✔ Strife D Leingod Published 10:16 PM
Tags
Zombie World War Guides
Aside from the offers in-game, here are some notable stages where you can farm a nice number of free Coins per battle. This will greatly help your defense against the Zombie hordes! 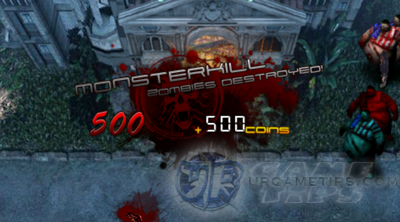 Performing Combos
- To perform Combos, tap and hold your finger on the game screen then keep on
firing zombies. Once you release it, the Combo will restart to 0 again.
- Use your other hand/finger to switch weapons or to use Guard Weapons.
- Do not use Guard Weapons except Ghost King, because zombies killed by these
Guards will not be included to your Combo count. Ghost King doesn't kill so it's ok to use when farming Coins.

Notable Repeatable Stages - Farming Guide
- Notes: Coins are gained during and after the battle.
- The Coins below are the total estimated Coins per completed battle.
- Just select "Retry" to play the stage again.

- Stage 6-6 will be your main farming stage until you reach the EGY Stages!
- Recommended if you have both "Kill Zombies" and "Kill Dog Zombies" tasks.

Bank
- Tap on the red (+) icon at the upper right corner.
- You can buy Coins and Cash here with "Real Cash".

Doing Offer Wall Tasks
- Under Daily Tasks
- Will require you to download and  install apps to get rewards.