✔ Strife D Leingod Published 10:45 PM
Tags
BloodRealm Guides
Card Effects can be easily seen below the card's art area and above it's stats. For the below sample card, the Effects are "Flight" and "Evade". To view more information about these key words, simply move your mouse pointer above the card.

Refer below to learn more about these Keywords and their effects to other cards. 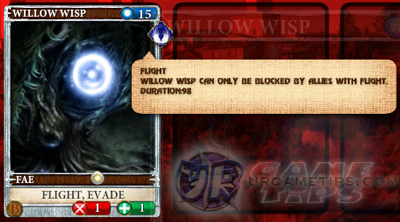 How To View Existing Card Effects in the Field
- Cards affected by these effects will gain a small icon next to their names.
- For the above card, the small icon represents "Flight" effect. Mouse over to view the info.
- This feature is very helpful while in battle, make sure to look for them to easily understand
what is happening in the battle field.
- Note: Temporary effects will not generate any small icons into affected cards.

IMPORTANT NOTES!
- X = represents a number (varies per card) in a specific card.
- The list below only covers effects from creature cards.

- Allies with Aim have a 50% chance to deal X more damage when they attack.

Ambush
- Allies with Ambush deal damage when they enter play.

Blast
- Allies with Blast deal X damage to all enemies when they attack.

Blitz
- When Allies with “Blitz” enter play, a creature is placed in all of your empty ally slots.

Burn
- Burn damage is resolved at the end of of a unit’s next turn.

Burst
- Allies with Burst deal X damage to enemies adjacent to the enemy they attack.

Corrupt
- Allies with “Corrupt” cause your Champion to lose Blood each turn.

Defender
- Allies with Defender block any enemy allies who attempt to attack your Champion.
- Looks like they can't defend damages from Champions.
- Can't defend direct damages from spells.

Delay
- When Allies with “Delay” enter play, opposing ally loses it's next attack.

Divine
- Allies with Divine cause your Champion to gain Blood each turn.

Evade
- An Ally or Champion with Evade dodges attacks.
- It looks like, it won't dodge damages from Spells and from "Damage All" effect.

Frenzy
- An Ally with Frenzy gains 1 Strength each time it attacks.

Giant
- Any Ally with Giant is dealt 1 less damage any time it is attacked.

Heal
- An Ally with with “Healer” will heal your Champion each turn.
- Healing effects can only restore Health up to the target's original Health.

Infect
- If any Ally with Infect attacks an enemy, that enemy will permanently lose Health each turn.
- Stacks up to 3 damage per turn.

Inspire
- An Ally with Inspire causes your other Allies to gain Strength each turn.

Mystic
- An Ally with Mystic causes your Champion to gain bonus Mana each turn.

Seer
- When an Ally with Seer enters play, you draw a card.

Slow
- An Ally with Slow does not attack on the turn it enters play.
- Similar to "Summoning Sickness". You have to wait for your next turn to use them.

Spawn
- When your turn begins, an Ally with Spawn conjures another creature into an empty slot.

Stealth
- Allies with Stealth cannot be blocked by opposing Allies.
- It will ignore defenses but be careful, because you might be ignoring powerful effects from
that opposing ally.

Stun
- If a Champion or Ally is stunned, it cannot attack.
- If you mouse over on the small icon, it will state as Freeze too.

Rage
- If an Ally with Rage kills an enemy Ally, it attacks again.

Rebirth
- An Ally with Rebirth becomes another creature when it dies.

Reflect
- A Champion or Ally with Reflect deals damage to any unit attacking it.
- Even if they die on that same turn, the Reflect effect will still work!

Regen
- A Champion or Ally with Regeneration heals 1 Health each turn.
- Healing effects can only restore Health up to the target's original Health.

Resurrect
- An Ally with Resurrect has a 50% chance of being reborn if it dies.