BloodRealm: How to Raid Guide

✔ Strife D Leingod Published 7:54 PM
Tags
BloodRealm Guides
The Raid feature unlocks after defeating Mars in the Story Mode. If you have unlocked the Raids feature, be aware that you are open from Raids too! Prepare to repel other players and reclaim your Provinces.

Raid other Players, Conquer their Provinces for a chance at additional resources. Refer below to learn more information. 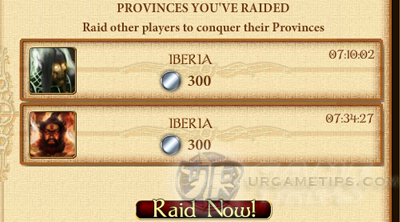 Raid Feature
- To directly Raid your friends, use the friends bar at the bottom section of your game screen.
- You can also Raid your friends and other players around the world by clicking on the
Provinces and Raids menu button. Click the "Raid Now!" button similar to the sample pic above.
- Raiding will require a number of food. To gain more Food, collect resources.

- Unprotected Provinces on the other hand will only require 10 Food. This method is
recommended because it will give you more Raid attempts and resources.

- Raid Provinces that produces Silver and/or Food. Raid players below your current level.
- To reset the available players to Raid, exit then enter the screen again.

Reward
- You can get 50% resources depending to the raided Province.

"Conquer"? or "Not Now"?
-  Note: If you will "Conquer", the Champion that you used for that Raid will be placed as
a Protector. You will no longer be able use that same Champion for other Raids.
- Conquered Province will be treated as if it were your own. Collect after 8 hours.
- Recommended if you have many Champions or if you are about to run out of Food.

Here are some tips that you might want to do to lessen the number of Raids.

- Quickly level up to at least Lvl 10. Most players tends to Raid lower leveled players.
- Put Champions to protect your Provinces that produces Silver and/or Food. Experienced
players will target Unprotected Provinces.

- Repel players by clicking their portrait and battling them.