✔ Strife D Leingod Published 8:25 PM
Tags
Pockie Ninja II Social Guides
Ninja Saga is a very friendly feature of Pockie Ninja II Social that will give you a 100% chance to recruit some powerful Golden Ninjas. The requirements are high but don't worry because you will get there eventually.

Refer below to learn how to unlock and recruit all Purple, Red and some Golden Ninjas from the Ninja Saga. Good Luck! 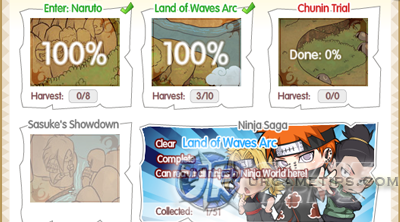 How to Unlock Ninja Saga
- Requires that you pass the Land of Waves to unlock Ninja Saga.
- If you still don't have any Golden Ninja at Lvl 40+, this is a sure shot method but it will
require a high leveled village to get a one.


Recommended Method
You can actually start recruiting Purple Ninjas after clearing the Land of Waves map, but
it is recommended that you wait until you are at Lvl 46. Here are some suggestions that you should do while  below Lvl 46.
- Recruit and train at least 1 Red/Purple Taijutsu, Weapon and Ninjutsu ninjas to Lvl 20.
- Build at least 6 upgraded Gem Mines on your village (a lot better if you have more).
- Train all your ninjas to Lvl 15+ and put them in your Gem Mines to work.
- For more info on how to gain Fast Ryo, read more here: Fast Ryo Farming Guide

At Level 46
If you still don't have any Golden ninjas, let's start getting one! From now on, forget your
daily routine and follow the steps below. 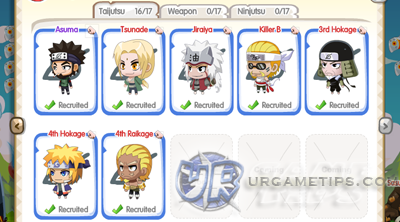 - Only do tasks from the "Active Point" feature that doesn't require any Chakra.
- Use all your Chakra for Harvesting Mines and for fighting Red Ninjas in Ninja Saga.
- Use all your Ryo for Bribing Purple and Red ninjas.
- Log in every four hours if you can. This way, you will be able to recruit a Golden Ninja in no
time! Do all these steps until Lvl 49.
- At Lvl 49, you should now have a complete Taijutsu - Ninja Saga Page. 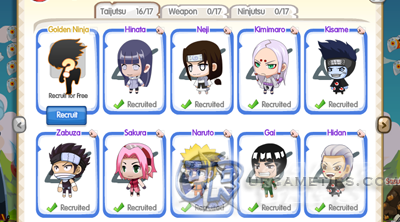 - Click the Recruit button to get a random Golden Ninja!
- Go to your Bag and use your Golden Ninja. Congrats! ^^ 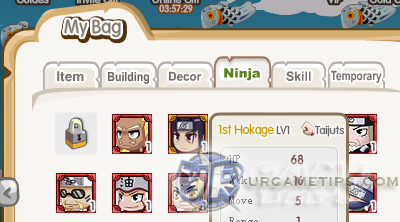 Note: If you have completed a Ninja Saga Page, you can no longer re-do that page.