If you can't memorize the hand seals anymore because it is nearly impossible to do so, write it on a paper or simply use any screenshot program or a camera.

1st Ninja - Kiyoshi Water Boss
He can use Restriction and Healing. After taking out half of his HP, he will start to heal himself. Your aim is to deal damage more than what he can heal on himself. About 800 HP. Your stuns will depend on luck because he can purify himself. After the fight, go to the stairs to take your next opponent.

2nd Ninja - Sen Ryo Fire Wind Boss
Deals Great Damage and a stun for 2 turns. Make sure that your HP never goes down below 900 HP to be able to survive the 2 turn stun. You can take your opponent slow and focus on surviving the battle more. Use your Healing Scrolls and Stuns wisely.

3rd Ninja - Takeshi Lightning Boss
Deals Great Damage and a 3 turn stun. Same strategy above but you have to heal yourself if you have lower than 1000 HP. Before dealing the last blow, go to your Gear and equip your weakest weapon.

4th Ninja - Your Name Here
Always remember that you have the advantage and you can beat your clone. Your clone has a weaker weapon, combo strategy, no pet and can't use scrolls.

This is a puzzle that you have to figure out. The aim is to find the seals that are placed around the labyrinth and unseal them. Ignore enemies and focus on finding the seals. Start by going all the way north to find the first seal then go all the way west for the second, south for the third and finally east for the last seal.

After you find one, your next aim is to unseal them. You have to solve the puzzle by placing the correct runes in order. Runes are randomly chosen each time you encounter a seal.

On the puzzle window, select the runes that you want to test then click on the big encircled Japanese word above it. The right side of the window is the history of runes that you have guessed and the numbers on the left of it are your clues. Warning, you will fail if you have used up all of your 10 attempts. 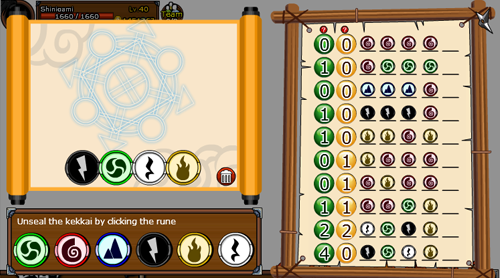 - Find a 0-0 rune a soon as possible. Try Red or Black first because they usually have 0-0 results.
- Follow the pattern above on how to use the 0-0 rune with the other runes.
- Before your 6th attempt, you should have figured out the 4 rune color types that is on the group. It's OK if they are not in their correct places. For the above picture, we have green, black and yellow. Since the blue rune has a 0-0 result, the fourth rune is white.
- The above picture is the worst case scenario if you can't get any 0-1. Don't worry because you can still unseal this one.

- Now choose a 1-0 rune and focus on finding it's proper place. Refer above for the pattern. For me, I chose the yellow rune and after 2 unlucky attempts, the yellow rune's final place is at the last slot. You will have a 1-0 result if you got the right place.
- Next, ignore the column where you have a sure placement. Choose again a 1-0 rune that has 2 rune colors. So ignoring the last column above, the only 1-0 row that has a 2 rune colors in it is the second one.
- Refer to the eighth row above for the pattern on how to find the next placement. Another unlucky attempt for me but still we know for sure that the final placement for the green rune is at the second slot.

- Now at your ninth attempt, place the 2 proper runes (green and yellow) and the other 2 runes that belongs to the group (black and white) anyway you want. If you have an unlucky attempt like me again, just switch the 2 runes (black and white) and you should be done unsealing. 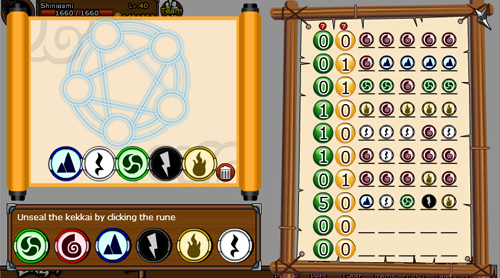 Finally, a lucky attempt. Study the picture and refer to the guide's idea above. The only difference is, you MUST get a 0-0 at your first or second attempt and as many  0-1s that you can. Good Luck Everyone!

All Shikigamis will have their own element. Easily noticeable by looking at the element rotating around them. Elements of each Shikigami will change when the Element Circle at the center switches to another Element. Refer below to have an idea on how to fight your opponents.

Recruitment
- Preferable friends to recruit are those Lvl 40 ninjas with Talent Skills or Token skills.
- I recommend that your team must have at least 2 offensive or defensive Water Ninjutsu (Refresh) Users and packed with some Stun Jutsus to survive the battle. An all out offense team can deal lots of damage but it will not last long because of the risk that someone will die after using up all healing scrolls.
- If you find it impossible to complete, you have a choice to recruit 2 Lvl 40 NPCs for 80 Tokens or just add more friends from outside the game.

Battle Tips
- Be aware of the changes of the Element Circle and refer above.
- Fight the Shikigami that is in disadvantage to deal more damage than usual.
- Refrain from attacking Shikigamis that are in their advantage.
- Wind Shikigamis can be annoying sometimes because of their dodge.
- Jutsus which ignores defense like Hellfire and Prison Colliding Wave helps a lot.
- Use your Stuns, Refresh and Healing Scrolls wisely.
- Don't forget to use charge on your friends when they are low on CP.
- Shikigamis will get stronger as their number decreases.
- When fighting 2 Shikigamis and before killing one of them, at least take out first a 1/4 HP from the other Shikigami because the Shikigami that will remain in the battle will have high defense always.

- Here you can recruit friends again and take control of their skills.
- Preferable recruits would be Lvl 40 offensive ninjas with refresh and stun jutsus. Much better if you can find preferable recruits with Token and Talent jutsus.
- You can also recruit 2 Lvl 40 NPC's for 80 Tokens to help you if you want or just add more friends from outside the game.
- Fight the Giant Snake Orochi and take out half of it's HP. Recover your HP and CP when you are near half of it's HP to prepare for the next battle.

- At the next battle, Mudo and Kyotaro will appear and ambush you team.
- Mudo can deal a 3 turn stun while Kyotaro has a 3 turn sleep so focus more of your Disabling Jutsus to Mudo than Kyotaro while dealing all your damage to the Giant Snake Yamata Orochi.
- Use Orochi's Yamata Flaming Jutsu at your advantage. This is a good opportunity to replenish your team's HP and CP while the other two ambushers are being restricted.
- Just concentrate your attacks on Yamata Orochi while maintaining your team's HP above 50%.

After the fight, you will now be recognized as a Jounin in the village. Congratulations!