- Choose your clan then follow the tutorial until you can have a view on the stats of your
first ninja. If your ninja has 52 Health and 40 Power then continue on the tutorial, otherwise reset your account. I recommend choosing the Lotus Clan because I think you will have higher chances of getting/recruiting 52/40 ninjas.

- After the tutorial, "LIKE" Ninja Warz to claim 15 Karma and complete the "Like Ninja Warz" Achievement. Go to your dojo and spend all your Karma to your ninja. Hopefully no one will attack you. If loses came in, reset your account. Why? because we need to get your first 150 wins without a single lose achievement and this is attainable only at this point.
- OPTIONAL: You may ask your  "friends" to give you 150 wins total.
- Get the Konami Komando Achievement
- From here on, get rewards from your Daimyo and hope for Karmas.
- Spend and focus all Karmas on one ninja at a time, DO NOT recruit another one for now.

- Recruit atleast 20 Allies as soon as possible to get more achievements.
- Claim bonuses posted by your allies on your wall. The more the better.
- DO NOT assist allies for now. We want our level to be low with a high leveled ninja.

- Ask your allies to gift you Negi and a Fried Shrimp.
- Remove your weapon and fight an AI/NPC clan for an achievement.
- Equip Negi and fight an AI/NPC clan to get an achievement.
- Equip Fried Shrimp then CLICK HERE and  fight this clan.
- Woohoo~ more Achievements and Karmas! Open up 3 relic slots, equip all available health and power relics and spend all your Karmas on your ninja. Right now, you should be a level 3 Player with a brown or black belter ninja. Congratulations, you really are a born winner.

- Move up to Level 4 through fighting clans or assisting your allies.
- Avoid fighting players, they might attack you back. Attack AI/NPC clans instead.
- OPTIONAL: Attack weakest clans that you can fight. Click on "◄WEAKER" at the fight page. It will give you less EXP and Gold but you will have higher chances of wining.
- DO NOT take advantage of the 2x EXP for now. Let it fade then continue. You know why.

- Now that you are at level 4. Spam attack all those level 1 AI clans till you get your 150 first wins and 0 lose achievement. They should be giving you 0 EXP and 0 Gold and that's perfect to keep your level low while getting the achievement. After that, you can relax now phew.
- Move up to Lvl 5. Boss Time! On your island, Click and beat up the small boss-child located below your dojo. Equip the lunchbox or any stronger weapon that you have to your strongest ninja then the other weapons to your weaker ones.

- Now that the arena or tournament is open. It's time to dominate! Get in and choose the
tournament type with the highest DPS (damage per second) weapon reward that is available.
- Share your tournament winnings to give Karma to your first 5 allies that claims it.
- Return here every 4 hours if you can and win tournaments as much as possible.
- OPTIONAL: At Lvl 6 Go to your magic shop and buy magic with your tokens.
- Don't forget to equip your reward weapons.
- Equip highest DPS weapon to your highest ninja and so on.
- Unlock 4th relic slot

- From here on, recruit ninjas with 52 Health and 40 Power ONLY when you have maxed
your first ninja. If you can't find 52/40 ninjas, wait for more or less 4 minutes then check back again.
- Recruit NON-52/40 ninjas for getting achievements. Remember, never use Karma on them.
- Dismiss NON-52/40 ninjas that has nothing to do with your achievements anymore to free up space and lessen the recruitment fee. The more ninjas you have, the higher the fee is going to be.

- Refer to the Achievements Guide 101 Link above of post and do the following.
- - Obtaining Ninjas - All of them except Full Force Achievement.
- Bully, Uber Bully, and Upset Achievements. Only do Upset achievement when you have completed all above achievements. To achieve Upset easier, I recommend 1 black, 1 or 2 any color, and 5 or more Lvl 5 white 52/40 ninjas then CLICK HERE and attack this clan.
- OPTIONAL: Philanthropist and Benefactor Achievement if you want to spend real cash.

- OK, so from here on what you should be doing are the following.
- Joining tournaments while doing above achievements.
- Claiming Gifts, Gold and Karma from your allies Facebook wall and Daimyo.
- Battling other clans and assisting allies for Gold and EXP.
- Hunt Weapons and Relics dropped by your enemies. Fight any clans 3 Levels below your level but not more than 10 Levels. They should be giving you 0 EXP and 0 Gold. Sell unwanted weapons and relics.
- DO NOT buy any Gold/Karma relics or weapons for now just do hunting.
- If you can't win tournaments, STOP getting EXP till you can win tournaments again.
- Yes, leveling is going to be slower now because of the achievements and lack of Karmas and Gold for your clan, but you will have stronger ninjas.

- At Lvl 15 a turtle/tortoise like boss named Genbu will appear on your island. Click on it to fight. You should have no problems dealing with it if you followed the guide above. Good Luck!
- Get the Quantity over Quality Achievement. Just recruit 52/40 ninjas.
- Continue on doing "Into the Tournament" guide above.

- Collect food weapons like Negi and Fried Shrimps. After 24 hours try and kill Genbu for an achievement by using ONLY food weapons equipped on your clan. You can fight Genbu again by clicking it's icon at the fight page located between the words "Enemies" and "Allies".

- Hunt or buy relics with the highest Life and Power bonuses. Armor and Agility can also be a good help from here on. Never use your Karma for buying relics unless that relic is a Karma producing one. Equip to get a number of Karma every 24 hours. Note, unequipping Karma relics won't restart the time so don't worry, go for it.
- If you can't win tournaments because of those clans similar to what you are doing, just wait for a while and try again. Equipping items and training more stronger ninjas will also help.

- Relics from these levels are very tempting to buy, specially those relics that can only be bought by Karma. I'll say NO! NOT YET, because good relics can still be hunted from battles. Level up your ninjas instead.
- Try to unlock your 5th relic slot.
- Grab Wind Blade Magic if you have the tokens.
- Use the hospital while leveling up if you want.
- Winning tournaments will become harder at this point on because of those players who
camps and farm Karmas. "Old Players" who almost bought all Karma producing relics before they retire.
- Try to win some tournaments because they give the best easy way to get weapons.

To give you an idea what should your profile look like, I took a screen shot from my own profile. It's not the best though but you can refer to it as a guide. 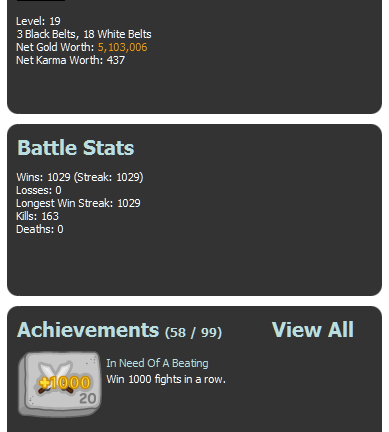 - Level up to Lvl 25.
- Tondeiru Josei will pop out with an island at Lvl 25. Defeat her to obtain an achievement.
- Warning! DO NOT sell her Daikatana. You will use it again to obtain another achievement.
- Do the "One More Sword In An Inconvenient Place" refer to the achievement guide above.

- Once you enter Lvl 26, you may start collecting ANY Relics that you want. Focus getting the highest output possible for Health, Power, Armor, Agility, Critical and Attack Speed. I recommend getting Relics that gives bonuses to 2 or more stats.
- Notable relics from this level bracket: Golden Underpants, Copper Cog, Kengen Mask, Keifer Challenge and more if available, because they can be counted as one of the BEST RELICS.
- Some relics that can be bought with Gold can still be hunted from battles.
- You might want to camp if you think you need to get stronger. Farm Karmas and do not level up. Focus leveling up your ninjas and getting more Karmas as possible.

- Level up to Lvl 35.
- Don't forget to customize your clan every now and then.
- Defeat Mecha Genbu and get the "Master of Machines" achievement.
- Try to get the achievements "Nuclear Arms Race" and "We Had A Falling Out". Refer to the Boss Fights section at the achievements guide.

- Some Destiny weapons are very useful at these levels. Mikaboshi Stones and Storm Swords are some of the best Destiny weapons that you can get from your allies. If you don't need them any longer, sell them for more Karma.
- Griffon Blade is also one of the best weapon you can but at the weapons shop.

- Refer to the achievement guide and do the - Ninja Training - section of achievements. Do it in order. After getting all these achievements, you are now close to completion.

- Notable Relic: Energy Ball and more powerful relics and more to come.
- Energy Ball is attainable at level 50 and can be bought with 50 Karmas. A SUPER RELIC that doubles your clan's power! A MUST GET RELIC for your clan.

- Use relics that gives bonuses to experience to boost up your leveling. Cap it to +100%.

- Here is another Screen Shot of my profile at Lvl 57 after getting all what I can. 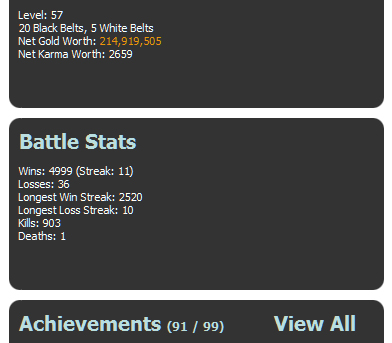 
- Complete over 25 Black Ninjas.
- Get all powerful relics and experiment with it for the BEST RELIC SET.
- Discover new weapons and experiment them with your relic set.
- Complete all or most of the Achievements.
- Reach the highest level available.

- Got nothing to do with your karma? Unequip all relics and weapons of your clan and look for the ninja that has the lowest HP and Power. Dismiss that ninja and recruit another one. Your target is to create a black ninja that has higher HP and Power than the one you dismissed.