✔ Strife D Leingod Published 3:38 PM
Tags
Android and iOS Game Apps
BarbarQ Tips and Guides
Are you ready for battle!? Got enough skills, tricks, tactics, and knowledge about the mechanics of the game? If not, then here's a simple guide for beginners on how to improve your battle performance and increase your Grade Lvl in no time!


Create a Party with Friends!
- The best thing about creating a party is that, you are sure that you will not be teaming up with bots! Yes, if you go solo or play with a 2 player party, there is a slight chance that you will be playing with bots which is not good at all, unless your Grade Lvl is still low.

- Follow other players by clicking on their avatar, this way, you can make team-ups much easier through invites.
- Alternatively, you may also click on the CHAT BOX (not the chat icon) then go to the "Team-Up Invitation" tab to join other players that are looking for party.

Choosing Your Character
- BarbarQ and Valvyrie are unlocked by default, and you have to unlock the others using Gems (highly recommended).
- Both free units are excellent characters, so go ahead and master them according to your play style.

Equip Pets
- Don't forget to bring your favorite pet too!
- Equip pets with abilities that can help your character, feel free to try them all.
- Note: Pet abilities will sometimes change due to game re-balancing, others will even get a whole new set of abilities that is way different than before! 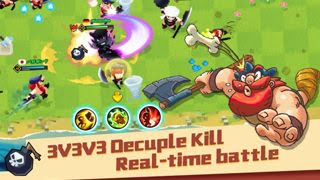 The Aim of the Game:
- You have 6 minutes battle time and will end once the timer expires.
- Eat mushrooms, level up, learn skills.
- You or your teammate is Master Evil in the end of the battle.

Leveling Up During Battle
- First of all, leveling up will noticeably increase your character's body shape, attacking range and HP, which can really help enhance your overall performance.
- Note that some skills and pet skills will also get an increased range.
- You may follow any of the methods below on how to gather mushrooms depending on your character, role, or play style.

Gather Mushrooms to Level Up
- Gather them around or go and attack that giant mushroom (aka Bashroom) that pops up after a while (recommended).

(Note: Bashrooms varies per map)
- This is much more ideal during the first few minutes of the battle, especially when other players are way ahead of your team, or if you want to level up quicker than others without fighting!
- Be warned though because players are definitely aiming for this one too.

Steal Mushrooms to Level Up
- Steal them from other players by defeating them or at least by assisting one of your team mates. During the first few minutes of the battle, you can also find bots (if available) that are easy to defeat for some quick level ups.
- Bots will usually confront you but will just move around dodging your attacks, but be careful because some players are disguising their name and flag similar to those bots ~ lol.

- The fastest way to earn mushrooms is to defeat the 1st place or Master Evil if you or your team can do it. If can't, go gather more mushroom and level up to at least Lvl 3, best at 5.
- It is also possible to grab mushrooms from players that you didn't kill, and from your teammates (some would purposely kill one of their dying teammate to grab their mushrooms, a neat trick for clutch play too!).
- Just by standing near your teammates, you can also receive some Exp once they defeat an opponent.

Level Down Penalty
- Your character will lose some mushrooms once defeated, but his/her Lvl will not go below it's current one (Lvls 1 to 5 are safe), Lvl 6 or higher can still go down to 5 though.

- Be aggressive and keep attacking your opponents to keep their lvls low, preferably done by berserkers.

The Master Evil!!!
- The one with the most number of mushrooms will become Master Evil, increasing his/her level even further. The first player who can reach 300+ Mushrooms total and reach Lvl 5, will become the first Master Evil.

- If your team doesn't have a Master Evil, go and grab or steal more mushrooms. Use the Chat function in-game to call up your teammates or to coordinate attacks/strategies.

- During team fights, if possible, also consider letting your top scorer grab all the mushrooms. Sometimes, this method is also perfect for clutch play and grab the win without defeating the Master Evil!

Knock Downs, How Does it Work?


Knock Down Effect
- After knocking down an opponent to the ground, you and all other players can still land 1 attack!
- After recovering from a knock down, the opponent will get a 3 seconds invincibility! So, every time you knock someone down, try to land an attack then quickly back off to avoid counter attacks!
- Note that even if they will hit your shield, it won't work on them, unless down with great timing though.

- Exception: Momolko (Cat Lady) can instantly recover from a knock down status by shape-shifting to a cat, so watch her out.

- TIP: Do not jump into an opponent, or group of enemies if they are about to recover from their knock down effect, a common newbie mistake.


What is a Lock Down?


Lock Down Effect
- Lock Down happens if a character is continuously flinching from multiple attacks or combos. This can be done by attacking a target from different directions, preferably front and back.
- It is also possible to solo lock down a target by using combos and skills (ex: Valvyrie's dash attacks, or by using simple Hook combos).
- During a Lock Down, a character cannot use any Skills, Items, or even attack!

- Once you are in this situation, the best thing to do is to try to escape, or use a Block or Double Break skill before it get's even worse.
- You may also equip some pets that can counter this effect like: Ru Yi

- TIP: Do not jump into a group of enemies alone, or if you think you can't survive their attacks. Play safe by using items (hit and runs), waiting for their HP to go lower, or when someone from their group got separated, go and kill fast!


Basic Defensive Technique: The Normal Attack
- Yes, normal attacks can deflect bombs, kicks, jumps, and some strikes, so always spam them whenever possible, especially while escaping.

Hide in Bushes and Clouds
- These are good advantageous areas to camp in and wait for enemies. 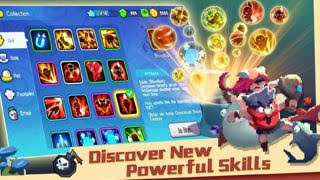 Level Up to Learn Skills!


Skills Sets and Roles
- Characters can equip 1 skill, and learn up to 4 more skills during battle.
- Skills are randomly generated, so choose any skill that you think is best for your character and role.

- Here's Some Example Roles:
- Attacker/Berserker Role: Choose and equip any skills. Mix with any defense type passive skills if you are playing solo and/or doesn't have support. Going full berserker is also doable.
- Support Role: Will probably equip "Drumstick" by default for healing support.
- Blocker Carry Role: "Block" as main active skill (or learn from battle since it's common anyway). Usually learns some passive attack type skills for more damage.

- Hybrid Role: Well it is really possible to mix and play all roles and skills, so go on and experiment.
- Master Evil Play: Well any role is doable, but I would highly recommend getting at least Magnet Lvl 1, because this will help you a lot if you want to go for Master Evil position and win.

Active Skills
- Active Skills will only use 1 slot, but they can be combined into new skills!
- Examples:
- Break Kick, Break Leap and Double Break (great for breaking shields, but requires more Energy. Break Leap is an AoE skill and can chase targets, so that alone is good enough).
- Whirlwind, Hook Axe and Tornado (high DPS once you are able to land the first hit!).
- Drumstick , SPD Spirits, and Shock Liquor (very OP if you have a pro support, especially those Shocks!).
- Block, Fire Shield, and Charging Shield (all 3 becomes a Charging Fire Shield, but Block alone is quite decent).
- Other Active Skills: Ice Ring (no available upgrades or combinations).

Passive Skills
- Skills that are always on once learned, and can be upgraded by learning the same skill.

- There are also some Passive Skills that can be enhanced up to Lvl 5 during battle by learning their duplicates 4 times in a row (must have 1 equipped) = "Protection Ball", "Thorns", "HP Steal", "Energy Steal", and "Magnet".
- For the skills above, if you are able to reach Lvl 5, you can also get a cool avatar for your achievement. It's really hard though, but good luck!

Pick Up and Use Items!


As much as possible, always carry an item with you. These items can really help you survive, defeat opponents, or escape from them.

Refer Here For More Info, Tips, and Guide:
- BarbarQ: How to Use Battle Items - FAQs, Tips, and Strategies