By understanding the roles of each Battle Girls, and by following the recommended team compositions below, you should now be able to create a team according to your style or preference. 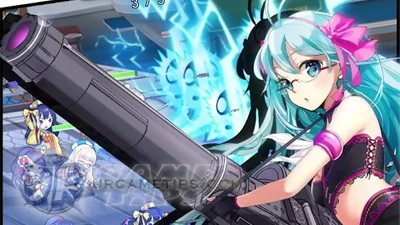 Tanks
- Their main objective is to take damages and stay alive for as long as possible.
- They don't make huge damages, but excellent tanks can hold the front line with control abilities like stun, and/or can also support the team with passive abilities.
- Note: Front liners and Tanks are totally different, so that means, not all front liners are considered tanks.

DPS (Damage Per Second or Strike)
- Your damage dealers, glass cannons or nukers. Best if they can also support the team with control, debuffs, or buff skills.

Crowd Controls (CC)
- Debuff specialists, Battle Girls that can immobilize enemies and render them useless.
- Battle Girls with Stun, Silence, Petrify, Sleep, Freeze, Hex, Exile or other similar skills. Most preferred are those that can do AoE (Area of Effect) attacks to control all enemies.
- For better timing, it's best that you find one that can control enemies using her Ultimate Skill.
- Note: All control battle girls are also considered as DPS but their main purpose on your team is to CC.

Support
- Mainly Healers with some control and/or support abilities.
- Battle Girls that can actively or passively buff your team's stats, and/or reduce ("debuff") enemies' stats.

Recommended to Upgrade
- Same with DPS section above.

- Example #1: Front: 1 Tank,  Middle: 1 DPS and 1 Control, Rear: 1 DPS and 1 Support
- Here's the most commonly used team composition. You can do your own too, just follow the general format above.

Full DPS Format: 1 Tank, 4 DPS or using 5 DPS
- Also known as glass cannon build, yeah they can do lots of damage, but the problem is, if your opponent has a nice Control, you're team's dead. Chances are, you won't even be able to cast most of your Ultimate Skills.

Dual Tank Format: 2 or More Tanks
- The problem here is, your Team's DPS output will weaken, and most of the time you'll even lose your 1st or 2 tanks fast, before you can take down your enemy's tank. How? One reason is because AOE attacks are area based, and melee attacks have splash damages, so those 2 tanks will always take damage at the same time.

- There are some exceptions here though, but I only suggest this for experienced players.

Stacking 3 or More Under One Position
- Same as above, do not stack 3 or more front liners because they will suffer from AOE attacks and DPS' melee splash attacks.
- Mid position is a little risky but still doable with 3. Rear area should be ok to have 3 but not 4.


Is It OK to Use 2 Control or 2 Support?
- Yes, as long that your team has a good synergy, and make sure that their control abilities will not overlap, which will make the other one useless.

When Is It OK to Use 2 Tanks?
- Once your Battle Girls are around Lvl 85+, tanks will become harder to beat, thus making battles much longer than usual. They actually call the 2nd tank as "Off-Tank", but still requires a nice team synergy though.

- Other players also consider using Dual Tanks only if they don't have a Control Battle Girl present for their team, especially for PVP Arena.

Are Healer Teams Viable?
- Possible but only at higher levels (around Lvl 85+),  and are used for Arena defense only. Their main goal is to win by slowly defeating the attacking team, or via time limits.

Physical Based Team (Must Be At Least Purple)
- Iron Fist, Smartie, Gambler, Tenesse, and Pandaria
- Potential: Purple until around Lvl 70. Replace Gambler above Lvl 73 with better DPS.

Magic Based Team (Must Be At Least Blue+2)
- Wildtress/Leona, Blowie, Lily/Psychic (or similar control), Elvis, and Angel
- Elvis and Angel can be replaced with other Support BGs you might like to try.
- Blowie's DPS might not be ideal for PvP after Purple+, replace if needed. Blowie and this team is still excellent for PvE though, and will come back and dominate PVP at Lvl 85+

Champion Mode Team
- Succuba, Blowie, Lily/Psychic (or similar control), Elvis, and Angel
- Elvis and Angel can be replaced with other Support BGs you might like to try.
- Potential: From early game to end game.